The pterosaur specimen is the most complete of its kind ever found—although it was hacked into six pieces. 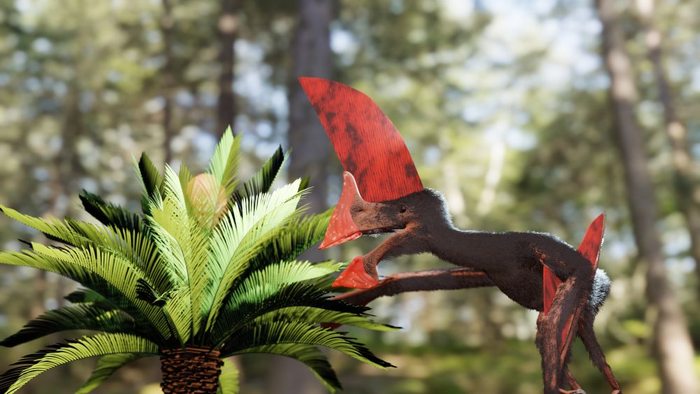 The pterosaur's crest likely made up 40 percent of its height. Victor Beccari
SHARE

In 2013, smugglers in São Paulo were all set to ship a huge cache of fossils out of the Santos Harbor, but before they could, local police swooped in and recovered the contraband. Among the piles of specimens were six large slabs of limestone.

Paleontologists finally got their hands on the slabs in 2016, when they were moved to the University of São Paulo. After five years of examinations, they can now confirm what’s concealed inside: a nearly complete skeleton of a Tupandactylus navigans, a type of pterosaur (related to but distinct from dinosaurs) from the early Cretaceous period more than 100 million years ago.

T. navigans is a tapejarid, a group of flying reptiles with large, distinctive crests on their heads. Knowledge of tapejarids is quite piecemeal since their remains are typically only partially preserved—and usually only skulls are found. But this new specimen includes nearly the entire body of the pteropod, giving paleontologists an unprecedented look at this creature beyond just its head. The findings were published in PLOS One.

The researchers found T. navigans preserved in the stone while conducting and analyzing CT scans. “The specimen is exceptionally well-preserved, with over 90 percent of its skeleton and soft-tissue impressions of the head crest and the keratinous beak,” University of São Paulo paleontologist and one author of the new paper, Victor Beccari, told CNN. “This pterosaur was over 2.5 meters (8.2 feet) in wingspan and was 1 meter (3.3 feet) tall.” Using data from the scans, the team was able to create a 3D model of the pterosaur’s entire shape and size.

The creature’s impressive head crest accounted for about 40 percent of its height, and the burden of its head on its long neck probably relegated the tapejarid to pretty short flights. Much of its time was likely spent foraging on the ground. “This specimen brings new insights into the anatomy of this animal and its constraints for flight, arguing for terrestrial foraging ecology,” the authors said in a statement.

The pterosaur specimen, however, was definitely not perfect. It was recovered in six slabs, fragments sawed apart by those who wanted to smuggle the fossil out of Brazil, likely for transportation purposes. “If we receive a fossil with this specimen intact, there’s no way in heaven or hell you’d cut the specimen the way they did,” Beccari told Gizmodo. Regardless, the recovered fossil is still an incredible find for science.

Fossil smuggling is quite a problem in Brazil today, with smugglers “taking fossils out of the country in tonnes per month,” according to Nature. During the 2013 raids alone, where T. navigans was recovered, police found and confiscated 3,000 additional fossil specimens.