Extreme cold is blasting half the US this weekend

The developing bomb cyclone has already broken temperature records and is set to intensify. 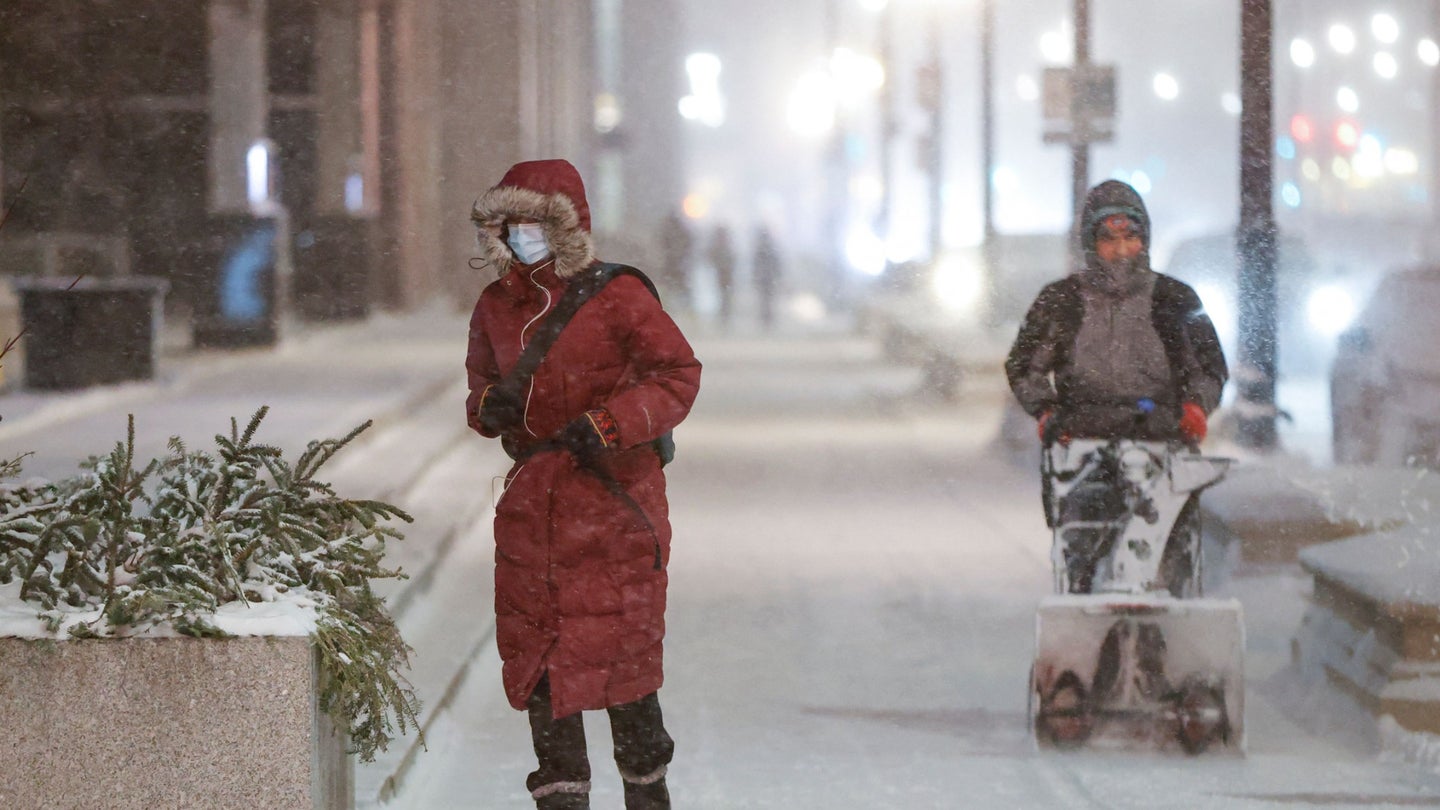 A woman crosses the street as she braves the freezing weather ahead of the Christmas Holiday, in Chicago on December 22, 2022. KAMIL KRZACZYNSKI/AFP via Getty Images
SHARE

Close to 177 million people in the United States are shivering in or anticipating an arctic blast and a messy mix of rain, snow, and gusty winds. According to the National Weather Service, more than 200 million Americans were under winter weather advisories on Thursday night due to the icy and snowy conditions, with the snowiest part of the storm set to arrive for some on Friday.

“Life-threatening wind chills over the Great Plains (will) overspread the eastern half of the nation by Friday,” the Weather Prediction Center said.

[Related: Texas’s grid may still be unprepared for the next big winter storm.]

Even areas of the southern US won’t be spared from the extreme Arctic cold. According to Alabama’s state emergency management agency, the state will likely see, “the coldest December airmass to hit the state since 1989,” continuing on Friday. Alabama is expected to face low temperatures ranging from the single digits in the north to the low 20s near the Gulf of Mexico.

Close to 80,000 customers in Texas are currently without power, according to poweroutage.us, with tens of thousands of customers in Arkansas, Missouri, Louisiana, Mississippi, and Tennessee also without electricity.

The Midwest and Great Lakes began seeing widespread light to moderate snow with powerful winds causing blizzard like conditions on Thursday. “Heavy snowfall rates” of about 1 to 2 inches per hour, “along with wind gusts of over 50 mph will result in near-zero visibility and considerable blowing and drifting of snow,” the Weather Prediction Center said.

The strong bomb cyclone is set to intensify Friday. A bomb cyclone is a rapidly strengthening storm that drops a certain number of millibars (a unit that measures the air pressure in the atmosphere) in 24 hours. Generally, a storm must drop 24 millibars in one day to be considered a bomb cyclone, but that can change depending on the latitude of the storm. Ahead of the snowstorm on Tuesday, a forecaster with Buffalo, New York’s weather service warned that this rapid decrease in pressure could be a, “once in a generation type event,” since this kind of rapid storm strengthening is rare over the lower Great Lakes.

In parts of the Northeast, flooding was reported on Thursday ahead of a “flash freeze” which could cause icy roads, when temperatures are set to plummet by close to 30 degrees Fahrenheit on Friday.

On Thursday morning, President Joe Biden received a briefing on the weather from the National Weather Service and Federal Emergency Management Agency (FEMA), and he encouraged Americans to pay attention to weather warnings and to stay safe in the face of the extreme cold. “This is really a very serious weather alert here. And it goes from Oklahoma all the way to Wyoming, and Wyoming to Maine. And it’s of real consequence, Biden said. He added that the White House has reached out to the 26 governors in the states that are affected by the storm and extreme cold.

To stay safe during winter weather, the Centers for Disease Control and Prevention (CDC) recommends being extremely careful when using extra heating devices such as space heaters and fireplaces, making sure windows and doors are closed tightly to keep cold air out, dressing warmly in dry layers of clothing, and covering as much skin as possible if trips outside are needed.