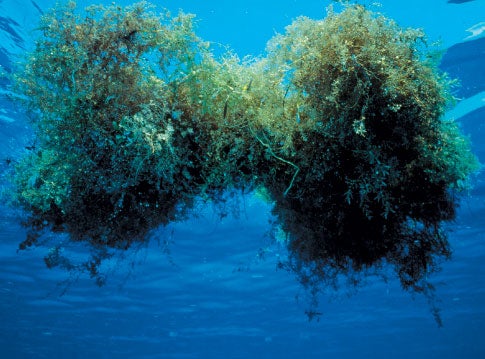 The Big Picture: Ethanol is the most widely used biofuel today, but it’s hardly a panacea to our energy woes. Researchers are scrambling to transform more- efficient organic materials — switchgrass, sugarcane, algae, sewage and even medical waste — into low-emission fuel for both transportation and electricity generation.

The canals of Venice, Italy, may soon provide a green power source for the city’s seaport and prove that algae-derived energy can meet commercial electricity demand.

A $272.6-million plant is awaiting authorization to generate electricity by burning biodiesel fuel made from canal algae. To get the fuel for the plant, algae harvested from the canal will be cultivated in 26-foot plastic bioreactors (and fertilized with carbon dioxide from the plant itself), dried, expeller-pressed to squeeze oil-like lipids from the dried biomass, and turned into biodiesel through the addition of lye. By 2011, the plant could generate 40 megawatts, which would be used to power the city’s seaport and channel the excess electricity — 33 megawatts — to docked tankers and cruise ships, all with zero net carbon emissions.

The Venice project won’t be cost-effective; it’s designed as a technology demonstrator and to give the city a jump on expected stricter cap-and-trade legislation. In the meantime, however, other innovations promise to finally make algal power affordable. While centrifuges account for 34 percent of the total investment costs, there is now a cheaper way to separate the algae from the water they grow in. In March, AlgaeVenture Systems in Ohio announced a new method to “dewater” algae using capillary action: A superabsorbent polymer pulls water molecules through a membrane and leaves the algae dry. The company claims that the process reduces biofuel production costs from $875 per ton to just $1.92. Advances in algal oil extraction and the conversion to biodiesel should bring expenses down even further.

Although there are currently no plans for a commercial plant in the U.S., companies like BioProcess Algae are hoping to change that. BioProcess recently received a grant to build a pilot plant in Shenandoah, Iowa. If successful, prototype plants like this one could eventually help make domestic algae power more than a curiosity.

The technology is still experimental, but late last year researchers at Penn State University discovered how to make methane — a main ingredient in natural gas — from the very thing driving climate change: carbon dioxide. The key is microorganisms called methanogens. Engineer Bruce Logan discovered that the organisms produced methane with nothing but water and carbon dioxide when zapped with an electric current. Build a fuel cell around the microbes, and as long as the electricity that feeds into the device comes from a renewable source like wind or solar, the process can provide a carbon-neutral source of combustible fuel.

Return to Future of Energy 2050 Roadmap