Dispatch from Copenhagen, Day One: Outlook Not So Good

Our reporter is at the International Scientific Congress on Climate Change, part of the lead-up to the United Nations COP 15 climate talks in December, where there is tons of information -- little of it heartening 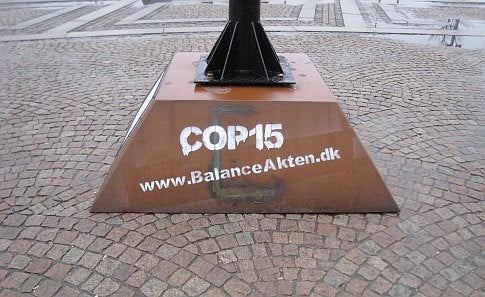 “There is not a lot, if any, good news that will be presented in the coming days,” said Katherine Richardson, the University of Copenhagen oceanographer. So began the International Scientific Congress on Climate Change, a gathering in Denmark’s capital city of scientists from around the world. The purpose of the conference is to synthesize the latest research on global warming. A summary of the findings will be distributed to the global policymakers who will meet here in December at the United Nations’s COP 15 meeting. There, if all goes according to plan, those delegates will produce a climate treaty that will replace the 1997 Kyoto Protocol.

The team tasked with condensing this flood of findings into a politician-proof summary has a hell of a job ahead of them. This conference is enormous — a deluge of information on melting ice sheets, sea acidification, second-generation biofuels, wind power, electrical-grid efficiency, biodiversity, carbon sequestration and just about anything else related to the future of the environment. Attendees use a 71-page book to navigate the event; it takes an additional 43-page guide to find your way around the poster sessions.

Despite the mass of information, the first day yielded a few unmissable pieces of emerging common wisdom. They go something like this:

Even if every nation in the world throws everything they’ve got at reducing greenhouse-gas emissions, we’ll probably be stuck with a planet that is, on average, 3.6 degrees F warmer at the end of the 21st century. Both polar ice caps, and Greenland, are melting; Greenland alone is shedding 50 to 70 cubic miles of ice each year. Since 1993, sea levels have been rising by approximately a tenth of an inch per year — which is faster than the rate of rise observed through most of the 20th century — and that is likely to accelerate. Ocean levels will rise by as much as a meter by 2100. That will wreak havoc on people living in low-lying countries. “Coastal flooding events that today we expect only once every 100 years will happen several times a year by 2100,” said oceanographer John Church, of the Center for Australian Weather and Climate Research. That, alas, is only the beginning. Even if we seriously rein in carbon emissions, ocean levels will probably keep rising for centuries, and that rise will most likely accelerate over time, according to Stefan Rahmstorf of the Potsdam Institute for Climate Impact Research.

To anyone who’s seen An Inconvenient Truth, this may sound pretty familiar. But the real news of the day seems to be that all the bad stuff we knew was probably happening is definitely happening, and more quickly than we had thought. Here, scientists are using several years of fresh data to give the most recent Intergovernmental Panel on Climate Change report an unnerving new chapter. It’s a good thing this conference is being held at a convention center a solid train ride away from central Copenhagen. If we were in the city center, this barrage of reality might have sent half the audience straight to the pub in search of a pint of Tuborg.

The “good news,” perversely enough, had to do with the recession. In the afternoon plenary session, Richard Levin, president of Yale University, said that the financial crisis has a silver lining — it provides a chance for transformation that in better times might not be possible. Retrofitting buildings, mass transit, vehicle fuel efficiency, smart grids, wind, solar, biofuels: all will stimulate the world economy, Levin said. The timing of COP 15, then, is oddly perfect. As Levin put it, COP 15 is a “critical opportunity not to be missed.”

Tomorrow, the news promises to be less grim. Talk of solutions begins first thing in the morning. I’ll be racing from session to session on biofuels, carbon capture and plenty of other cool low-carbon tech, and reporting on it here.