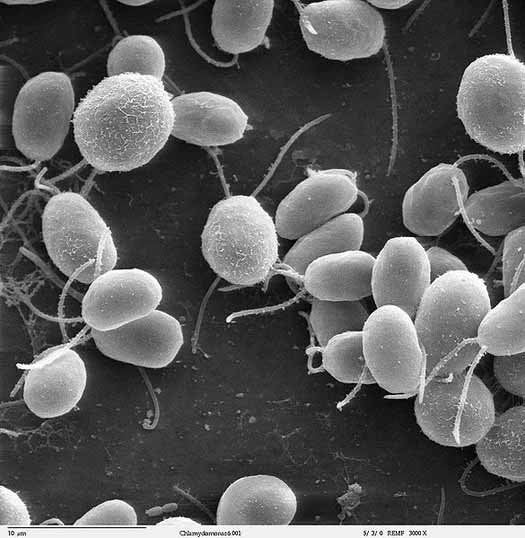 Algae has been floated again and again as a possible means of biofuel production, usually through chemical processes that extract sugars or other organic compounds that can be processed into fuel. But what if we could simply steal electricity from algae, no processing or chemical wizardry necessary? We can, says a team of researchers who recently stole electrons directly from algae for the very first time

; it just isn’t very efficient to do so.

Animals have been stealing energy from algae for eons, but like current biofuel production methods, they usually steal it in the form of stored-up chemical energy like sugars or starches. But a collaboration of Korean and Californian researchers wanted to take raw electricity directly from algae themselves by harvesting electrons.

Using the common Chlamydomonas reinhardtii as a test subject, the researchers applied what’s known as an overvoltage — a tiny current that shocks the cells into motion. If the algae are shocked while simultaneously being exposed to sunlight, they begin to produce current that can be siphoned from the colony and put to use.

But naturally there is a downside: the power produced even from a rather large colony of algae isn’t enough to power any consumer electronic device. In fact, to get a single amp one would need trillions of cells. And even then there’s a net energy problem: the amount of energy derived is no more than that expended in the over voltage.

Which kind of makes it all sound like a waste of time, if not energy.

But in a larger context, the process has only recently been proved possible for the first time. The fact that the team was able to coax the algae into giving up any current at all is fairly remarkable, and could push open the door for further study into how we could sustainably siphon electrons from other natural processes without resorting to burning every hydrocarbon we can lay hands on. Other larger ecosystems could provide higher net gains and increases in technology could further increase yields. All of that is most likely a long way off, but in the meantime the idea is interesting to think about.

After all, we already know that if you can harvest the electrical charges within larger organisms, you can power a fairly sizeable robot civilization.