Even if we tap every renewable power source available, it won't mean a thing without a final, crucial step: reinventing the grid

The American electric grid is an engineering marvel, arguably the single largest and most complex machine in the world. It’s also 40 years old and so rickety that power interruptions and blackouts cost the economy some $150 billion a year. The idea of building a connected “smart” grid that can route power intelligently is beyond daunting, no matter how much stimulus money gets thrown at it. But if we want to cut carbon, we have no choice. Today’s grid simply cannot handle a large-scale rollout of the clean-energy sources outlined in this series.

In part that’s because we need new high-voltage power lines to connect parts of the country where renewable resources are abundant (the sunny Southwest deserts, the windy Great Plains) to the cities and suburbs where more people live. But the more fundamental problem is that most renewable power sources don’t behave like fossil-fuel sources — they can’t be turned on and off on demand. Wind farms produce power only when the wind blows; solar, only when the sun shines. This is problematic, because power demand is twofold: We need “baseload” power that’s predictable and steady, and “peak” power for daily spikes in demand (when, say, everyone arrives home and turns on their air conditioning). Intermittent renewables are not well suited to either. But with more power lines connecting power sources over a broader geographical area, renewables can simulate baseload power. (The wind is always blowing somewhere.) And a smarter grid cleverly shifting power demand around can redirect enough clean electricity to handle it when demand increases suddenly. 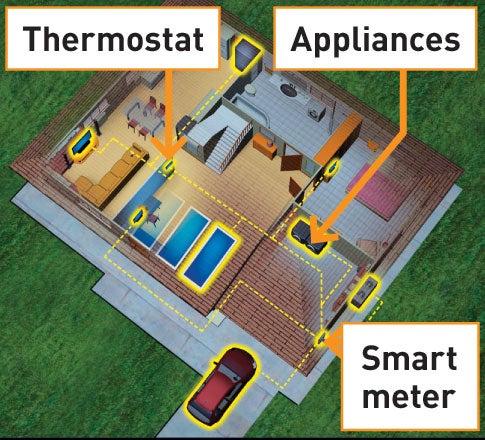 At a Small Scale

sensors will connect each appliance in your home to a smart meter. The meter will serve several purposes. One, it will provide detailed information on how much energy you’re using at any given time and what it’s costing you. Two, it will allow you to control your energy use remotely — from your office computer, for instance. Three, it could allow your electric utility to regulate your energy use for you, reducing power flow during peak demand hours

The idea behind the smart grid is to embed the system with sensors and computers so that utilities and consumers can precisely control power usage and delivery. Wireless nodes (on substations, transformers and wires) and smart meters (on homes and businesses) will communicate over the Internet to you and your electrical supplier. That way, when everyone turns on the A/C, the electric company can lower the power headed for other appliances, or even draw electricity stored in the battery of your plug-in hybrid, which, when parked, would act as a backup power source.

Rebuilding the entire grid and all its components could cost trillions, and it will require the coordinated efforts of hundreds of state and regional agencies, power-plant owners and electrical utilities. But the smart grid is already appearing piecemeal. By 2012, Southern California Edison, one of the country’s largest electrical utilities, will install 5.3 million smart meters throughout San Diego and Los Angeles that will tell homeowners exactly how much power they’re using at any given time — an important first step. The city of Boulder, Colorado, will soon finish building the country’s first smart grid, with smart metering and a variety of sustainable energy sources. And President Obama’s stimulus package includes $11 billion for smart-grid technology, to be used for research and demonstration projects.

Finally, a smart grid and a new network of high-voltage power lines to support it will make rolling brownouts a thing of the past. Let’s get to it.