Could the Cold War be heating and lighting your home? If you are one of many Americans whose life is... 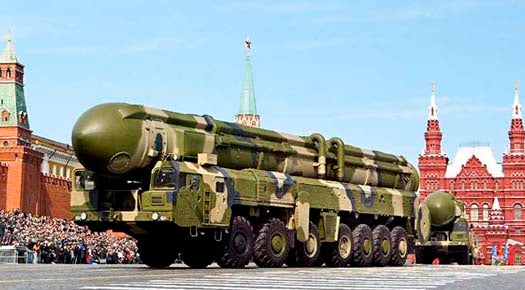 Soviet Topol-M missiles are capable of reaching Washington, but thanks to non-proliferation efforts the one seen here may make it to U.S. shores as civilian reactor fuel. Thanks, comrades.
SHARE

Could the Cold War be heating and lighting your home? If you are one of many Americans whose life is powered by a nuclear power plant, there’s a good chance it is; while not widely publicized, decommissioned nuclear warheads provide much of the fuel powering America’s 104 nuclear reactors. But here’s the real kicker: nearly half of that low-enriched uranium comes from recycled Soviet nukes.

Over the past 20 years, nuclear disarmament has become a huge part of the electricity industry, making President Obama’s talks with Russia on a new arms treaty as poignant to utilities as carbon caps, smart grids and climate change bills. But if those talks don’t extend the current program for dismantling Soviet nuke cores beyond its 2013 expiration date, there could be a supply gap for nuclear fuel just as the industry is pushing nuclear power as a workable, eco-friendly transition fuel until better biofuels become economical.

Warheads are no small part of America’s nuclear power industry. Currently, 10 percent of American electricity is nuclear (compare that to 6 percent for hydro, or 3 percent for solar, biomass, wind and geothermal combined). A full 45 percent of that fuel comes from decommissioned Russian nukes whose cores have been converted into civilian reactor fuel — at times Russian nukes have accounted for more than half. Comparatively, five percent of civilian fuel comes from decommissioned American bombs.

What’s more, both America and Russia are sitting on a wealth of nuclear fuel. Current nuke numbers are still staggering, considering the vast damage that just a handful of thermonuclear warheads can do: The U.S. maintains a stockpile of 2,200 nuclear warheads, the Russians 2,800. Talks between Presidents Obama and Medvedev this summer limited deployed warheads to 1,500, which opens up quite a few nukes for decommissioning if the two parties so choose. However, it’s unclear that they will. The Strategic Arms Reduction Treaty expires Dec. 5 and a new agreement to cut arms further could be reached, but even that doesn’t guarantee that bomb cores will be dismantled and converted to peaceful use, as the talks deal strictly with delivery vehicles and deployed active nukes.

If the supply of cheap Russian nuke fuel is interrupted American nuclear power concerns won’t shut down, but electricity from those plants will become more expensive as utilities turn to commercial sources. Enriching uranium is quite a bit more expensive than de-militarizing previously-enriched, weapons-grade nuclear fuel.

Watching electricity prices spike while politicians spar over how many thousands of doomsday devices to keep pointed at one another, especially when those devices could be providing cheap, clean energy for civilian use, will be frustrating for consumers (and voters). If global warming can’t force mature economies to give up fossil fuels, perhaps it will at least pressure Moscow and Washington to take more reasonable stances on their nuclear arsenals.