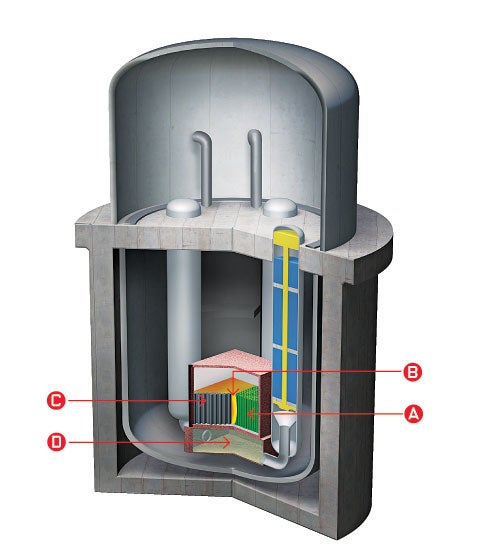 The Big Picture: It’s nearly impossible to imagine making meaningful carbon dioxide reductions without designing safer, cleaner reactors and rolling them out immediately — because no one wants to build more of the reactors we have today.

Of all carbon-free energy sources, nuclear power is the only one that’s already working on a large scale, generating 21 percent of America’s electricity. It’s also the one that freaks people out the most. Memories of Chernobyl, fears of terrorists getting nuclear material, and unease over waste that stays radioactive for tens of thousands of years all mean that before nuclear power can be expanded on an order needed to meet greenhouse-gas-reduction targets, engineers will need to build new reactors that help mitigate the unique dangers of nuclear fission.

In the short term, we’ll have to settle for so-called Generation III+ reactors — simpler, safer and cheaper versions of the water-cooled behemoths that dot the landscape today. But 20 to 30 years down the line, things start to get much more interesting. Here’s a look at the next few decades of nuclear power.

Design: Pressurized water
How it Works: Like today’s reactors, these bathe enriched uranium fuel in water that absorbs heat to make steam.
Promise: Gen III+ pressurized-water reactors add “passive” safety mechanisms that cool the reactor if the plant loses power. For example, in an emergency, water flows from an extra tank above the reactor, driven by gravity.
Problems: Radioactive waste takes years to cool before it can be stored in underground repositories, which still don’t exist.
Status: Mitsubishi-Westinghouse, which developed the design, has received approval from the U.S. Nuclear Regulatory Commission and has signed contracts to build six reactors in the U.S. and four in China.

Design: Pebble bed
How it Works: Tennis-ball-size graphite spheres (pebbles) filled with uranium dioxide fuel capsules are stacked in the reactor like gumballs, where they start a nuclear reaction. A pump sends helium into the reactor, where it flows around the pebbles, absorbs heat, and then drives a turbine.
Promise: If the coolant is lost, the graphite pebbles absorb enough heat to prevent the fuel from melting down.
Problems: A single reactor requires billions of perfectly manufactured fuel capsules. If oxygen seeps in, the fuel can catch fire. The reactor uses enriched uranium (also good for making bombs) and produces radioactive waste.
Status: Researchers have built and run small test reactors, but the design hasn’t been commercialized.

Design: Traveling wave
How it Works: Enriched uranium starts the process, releasing neutrons that help convert scrap depleted uranium (left over from enrichment plants) into plutonium. The plutonium releases yet more neutrons that convert more depleted uranium into usable fuel [see illustration above].
Promise: Very little enriched uranium is required, and there is already enough to last for centuries using this technology.
Problems: Cooling the reactor could require molten sodium, which catches fire if it comes into contact with oxygen or water. No one has built even an experimental traveling-wave reactor.
Status: A think tank called Intellectual Ventures wants to build a plant by 2020, but outside experts are skeptical, saying it could take decades.