Scientists think microalgae could be the answer to slashing CO2 levels and serve as a more effective, eco-friendly biofuel 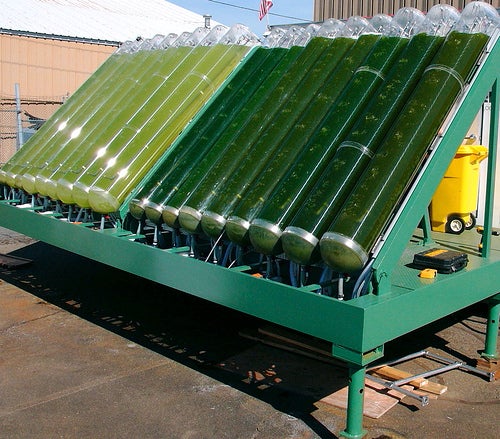 Last week scientists were extolling the virtues of duckweed—this week, another type of pond scum is being called a possible savior. Norwegian scientists believe microalgae could slash CO2 levels—responsible for a lot of our global warming woes—and even be tapped for a more effective biofuel in the future.

By taking exhaust fumes from carbon-burning plants and factories, mixing it with water so that the CO2 can dissolve into it and then pumping it into a “photobiorector” (a large transparent tube filled with microalgae), scientists can produce solar biofuel. The sunlight beating down on the tube presents the proper conditions for photosynthesis to take place, allowing the algae to convert CO2 into oxygen. The algae can later be removed and buried into the seabed, capturing the gases they take in.

When algae itself is a source of fuel, it’s similarly environmentally friendly. Even if used as biodiesel feedstock or biomass—essentially any living or dead organic material that can be used as a renewable energy source—it still produces “carbon negative” energy. In other words, the net carbon it releases during energy production is less than the carbon it removes from the solar biofuel process. And, unlike other first-generation biofuels, like sunflowers or corn, made from food crops, scientists believe algae is more agriculturally-friendly. The residue left after they have been pressed for biodiesel, for instance, can come in handy as mineral-rich fertilizer.

Sounds too good to be true, but scientists worldwide, including in Australia, Germany, Japan and the U.S., are investigating the solar biofuel technique. Since the idea is still in its conception phase, researchers have yet to test how it could effectively work industrially and what types of algae work best.