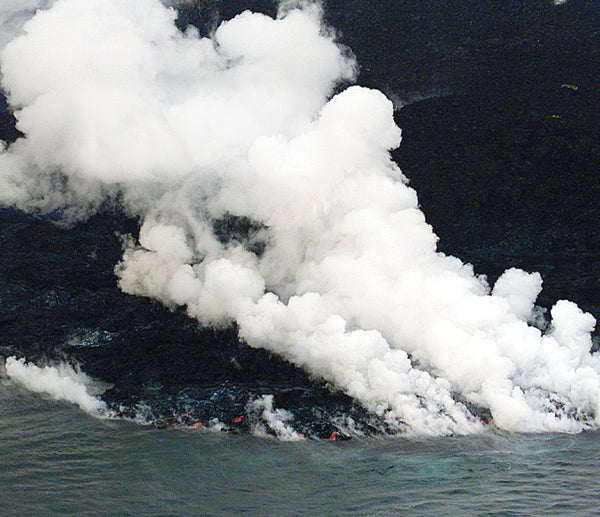 To live on the banks of Africa’s Lake Kivu is to risk your life every day. Large amounts of methane, carbon dioxide and hydrogen sulfide gas are dissolved in various layers of the lake’s deep waters. Scientists warn that a disturbance such as a volcanic eruption or earthquake could cause a redistribution of the lake’s waters and the gases in them. This shuffling, known as an overturn, could unleash an invisible, suffocating cloud of these compounds—a rare event known as a limnic eruption—killing as many as two million people nearby. Now, rather than simply wait for disaster, scientists hope to put some of that gas to use, as cheap energy.

Lake Kivu, located on the border between Rwanda and the Democratic Republic of the Congo, is one of Africa’s largest lakes. It covers 1,040 square miles and is nearly 1,600 feet deep. The region is particularly volcanically active, and magma and groundwater feed gases and minerals into the lake.

Carbon dioxide dissolves best in high-pressure, low-temperature water like that at the bottom of the lake—and the CO₂ makes the water more dense, so it stays at the deepest levels. Dissolved methane, hydrogen sulfide and minerals also increase the water’s density. Organic materials, such as dead plants and fish, decompose on the lakebed, producing additional methane. As a result, the bottom of the lake contains layers of pressurized solutions of water and gas—a lot like a bottle of soda—while the less-dense layers of water on top act like a cap.

Over time, the deepest waters of the lake have accumulated about 60 cubic miles of CO₂ and about 14 cubic miles of methane. With these gases mostly trapped at the bottom, the lake’s dark depths are a time bomb.

A disturbance of the lake could have the same explosive effect that occurs when you open the top of a soda bottle or pop a champagne cork—a bubbling over of liquid and gas. In the lake, the cause of the sudden release might be an earthquake or the immersion of hot lava that disturbs the layers of water in the lake. Large amounts of gas would bubble up and, just like it happens in the bottles, the contents of the lake would surge up and spill over.

The lake lies in the Great Rift Valley, where Africa is splitting apart as two tectonic plates move away from each other, making it an earthquake hot zone. Early this year, there were two serious quakes, which killed a total of 40 people.

There have also been volcanic incidents at Lake Kivu in the past. On January 17, 2002, a stream of lava from Mt. Nyiragongo, a volcano approximately 11 miles from the lake, burned its way through the lakeside city of Goma, forcing between 300,000 and 400,000 people to flee and destroying several nearby areas. When the lava hit the water, it created a huge cloud of steam, and some scientists worried that a deadly overturn would result. Luckily, the lava sank only about 300 feet into the lake—not deep enough to release a toxic cloud of CO₂ and methane. 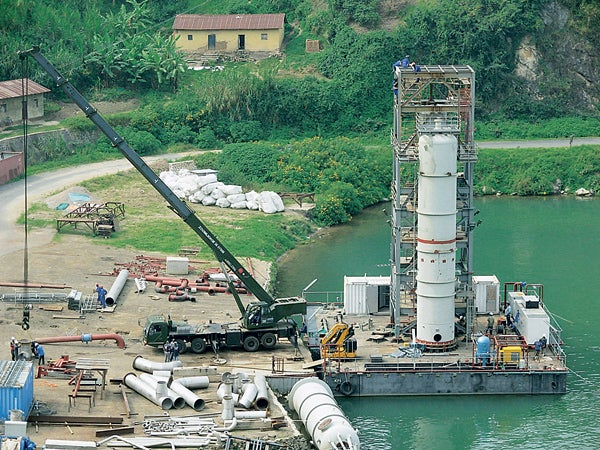 An Israeli company, Ludan Energy Overseas, is one of the contractors working to set up a facility that can exploit the lake’s gas to produce electricity.

Had the molten rock sank to a depth of 1,000 feet, it might have unleashed a catastrophe like the one that hit Lake Nyos in Cameroon in 1986. In the course of just a few hours, Lake Nyos released enough CO₂ to kill 1,700 people as far as 15 miles from the lake, suffocating them in a cloud of dense carbon dioxide. The event may have been triggered by a landslide, but the exact cause is unknown. And Lake Nyos wasn’t the first such disaster. In 1984, an overturn at Lake Monoun, also in Cameroon, killed 37 people.

Samples taken from the sediments on the bottom of Lake Kivu and from deposits on its rocks reveal that overturns like these have, in fact, occurred there within the past 5,000 years—and some scientists believe that another could strike within the next century unless something is done.

Putting Gas in the Machine

In Cameroon, the solution has been to install pumps that gradually pull gas from the bottom of Lake Nyos and Lake Monoun and release it at the water’s surface. Researchers now realize that a similar method could bring the methane gas in Lake Kivu up into a power plant onshore. The lake contains enough gas to deliver inexpensive, clean electricity to the region for many years. A preliminary project is now in operation, and the governments of the two countries that share the lake are hoping to produce large amounts of power as soon as 2020. Rwandan officials estimate that Lake Kivu could supply electricity to almost the whole of the country for more than 40 years, with some left over for the Congo.

Both countries have drafted an agreement to put Lake Kivu’s methane to good use, and a number of investors, including the World Bank and contractors such as COWI, a Danish consulting group, are working to get the project under way.

From a technical perspective, the process should be simple. A local brewery used methane from the lake bottom for many years to produce its energy, proving that the gas can be brought up from the lakebed and used to power businesses and homes in the area. In the 18 years before it closed, in 2004, the brewery relied almost exclusively on power produced by the lake’s gas. 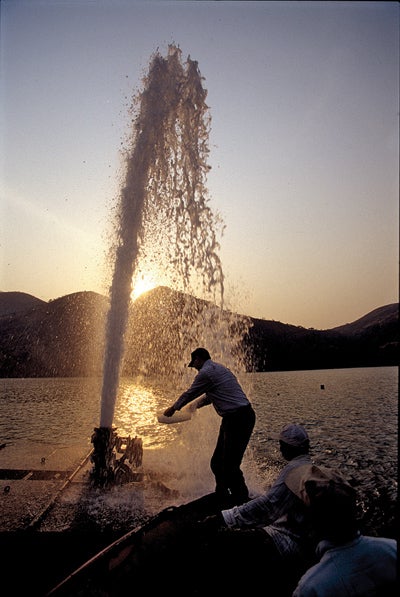 In principle, all that’s required is sinking a pipe deep enough to reach the floor of the lake and pumping up the lowest layer of water. As the water rises, its pressure falls, and it releases bubbles of methane, CO₂ and other gases. The bubbles increase the buoyancy of the water and force it upward and out of the pipe, creating a partial vacuum that pulls more bottom water up; eventually, the pump is no longer necessary. The methane can then be separated from the CO₂ and hydrogen sulfide and sent to a power plant, where it will be burned to provide energy for turbines.

Complicating matters, however, is the fact that the lake’s CO₂ is not useful, and releasing the greenhouse gas in the process would contribute to global warming. It’s the price that must be paid, say those involved, for avoiding a deadly disaster. “If we don’t do anything, there will be an eruption,” says Finn Hirslund, a senior engineer at COWI. “The question is how to avoid that the right way.” For now, the plan is to pump the CO₂ back into the upper levels of the lake water, from which it will slowly dissipate into the air.

Scientists and engineers estimate that there are almost 10 cubic miles of methane available for extraction in Lake Kivu, and in time they expect that installations will be built to pump gases up from several locations in the deepest parts of the lake.

The Rwandan and Congolese governments hope that by 2020 methane from the lake will provide 400 megawatts of electricity to be divided equally between the two countries. According to one company involved in the project, the resulting power will cost a fourth of the current price of electricity in Rwanda.

In the meantime, as organic material sinks to the bottom of Lake Kivu and decomposes, more methane will continue to be produced—about 3.2 billion cubic feet a year. But rather than threatening the lives of those who make their homes on its shores, the lake could, in fact, be a source of livelihood in the region.

Turn the page to read about Africa’s Other Killer Lakes. 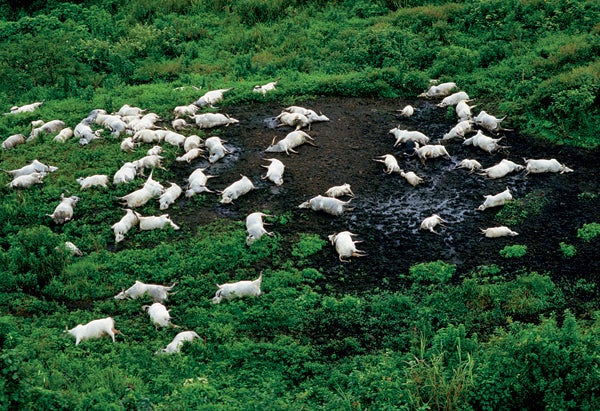 In 1986, gas released from Lake Nyos in Cameroon killed more than 1,700 people and thousands of animals.

Researchers know of three lakes in the world with the geological structure that make them capable of trapping and releasing deadly amounts of gas. All three lakes are in Africa, and in the past 25 years, two of them have demonstrated just how dangerous they are. The disasters at Lake Nyos and Lake Monoun in the 1980s were the first indications to scientists that the phenomenon was even possible. Pumps have been installed in both lakes to pull gas from their depths.

Lake Nyos is located in northwestern Cameroon. Under its waters lies a pocket of volcanic magma, out of which CO₂ seeps and dissolves into the lake’s water. On August 21, 1986, something—most likely a landslide, but possibly an earthquake or thunderstorm—triggered the release of a large amount of CO₂ from the lake. The gas spread up to 15 miles from the lake in a thick, suffocating cloud. Some people managed to escape, but 1,746 died, and thousands of animals were killed by a lack of oxygen. On the advice of scientists,
a pumping system was installed in the lake in 2001.
Lake Monoun is near Lake Nyos in Cameroon. On the night of August 15, 1984, people living near the lake heard a strange boom. It came from the lake, which released a CO₂ cloud that spread out and suffocated 37 people, including 10 people in a truck (according to published reports, two people sitting on the truck’s roof, above the CO₂ cloud, survived). What triggered the disturbance is still unknown. Pumps were installed in 2003 to avert a repeat disaster.