Talk about a Eureka moment. Scientists at Sandia National Labs, seeking a means to create cheap and abundant hydrogen to... 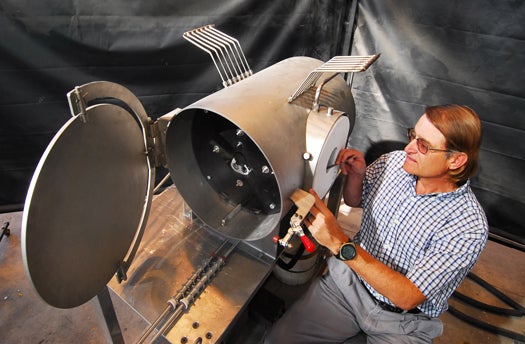 Talk about a Eureka moment. Scientists at Sandia National Labs, seeking a means to create cheap and abundant hydrogen to power a hydrogen economy, realized they could use the same technology to “reverse-combust” CO2 back into fuel. Researchers still have to improve the efficiency of the system, but they recently demonstrated a working prototype of their “Sunshine to Petrol” machine that converts waste CO2 to carbon monoxide, and then syngas, consuming nothing but solar energy.

The device, boasting the simple title Counter-Rotating-Ring Receiver Reactor Recuperator (we’ll go with “CR5”) sets off a thermo-chemical reaction by exposing an iron-rich composite to concentrated solar heat. The composite sheds an oxygen molecule when heated and gets one back as it cools, and therein lies the eureka.

The cylindrical metal CR5 is divided into hot and cold chambers. Solar energy heats the hot chamber to a scorching 2,700 degrees, hot enough to force the iron oxide composite to lose oxygen atoms. The composite is then thrust into the cool chamber, which is filled with carbon dioxide. As it cools, the iron oxide snatches back its lost oxygen atoms, leaving behind carbon monoxide.

The same process can also produce raw hydrogen by pumping water rather than CO2 into the cool chamber. Hydrogen and carbon monoxide can then be blended into syngas, a replacement for current hydrocarbon-based combustibles like gasoline, diesel and jet fuel. While it’s not a total solution for carbon emissions — syngas, after all, burns right back into CO2 — it is an alternative to sequestering carbon underground, where it benefits no one.

CO2 recycling could be used to trap waste carbon from factories and power plants and return that energy to productive use, rather than releasing it into the air, where it can cause problems science doesn’t even yet fully understand. The next step for the team is to increase the process’s efficiency to twice that of natural photosynthesis. A market-ready CR5 device is still more than a decade away, but the idea of taking our waste carbon and turning it directly back into fuel using nothing but abundant solar rays is tantalizing, to say the least.