Ocean pH and the Fate of the Food Chain 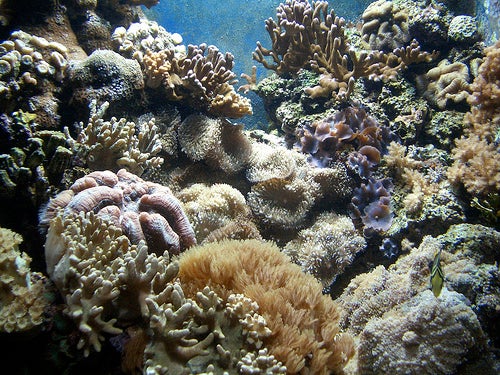 Global warming is far and away the symptom at the top of the list of indicators that our planet is overloaded with carbon dioxide. Another important, but less considered consequence of the excess CO2 is the effect it has on the world’s oceans. The oceans are a natural carbon dioxide sponge, responsible for maintaining the balance of CO2 in the atmosphere by absorbing a measure of the gas in its water. Currently, it is estimated that the ocean is uptaking nearly one-third of all human-produced CO2, which is slowly lowering its overall pH. Put simply: the oceans are becoming acidic. That’s bad news for a lot of organisms, but those that produce shells are likely to be the first and hardest hit.

Oceanic animals that make shells by and large use calcium carbonate to build them. In a healthy ocean, CaCO3 ions are present in surface waters at tremendous concentrations, a concept known as supersaturation. When the water becomes more acidic, it is less able to hold the ions and so the concentration becomes under-saturated. That means animals will have to use proportionally more energy to build their shells, which will likely mean they have little left to find food and reproduce.

We’ve known that the oceans are headed in this direction, but we didn’t previously realize it was happening as quickly as it now appears to be, as a new paper in Science is reporting. This rapid acceleration could have devastating effects on the underwater food chain, something so complex we are at a loss to predict the potential extent completely.