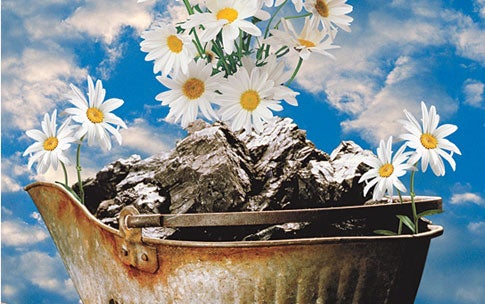 Coal, the 19th century’s fuel of choice, is still going strong in the 21st. The U.S. is by far the world´s biggest source of the fossil fuel, mining 1.1 billion tons of it a year. Coal may be cheap-just $1.68 per million BTU, compared to $6.45 for natural gas-but it exacts a higher price in pollution, with some 1,650 times as much sulfur dioxide, four times as much nitrogen oxide, and twice as much carbon dioxide released per kilowatt-hour of electricity. In an effort to save the environment from coal´s noxious emissions, the U.S. Department of Energy and major power companies plan to build FutureGen, a coal-gasification plant that will liberate clean-burning hydrogen from coal while siphoning off the carbon dioxide for injection into underground saltwater deposits. The first full-size power plant of this type is slated to go online in 2012. Here´s a look at how it will operate. HOW FUTUREGEN WORKS

Big lumps of sooty coal hardly seem like the future of energy, but that’s exactly what the U.S. Department of Energy predicts. Consumption of the fossil fuel-the main source of greenhouse gas and a major contributor to acid rain, smog and mercury poisoning-will hit 10.6 billion tons a year by 2030, a near doubling of the 5.4 billion tons burned in 2003, according to the agency.

But coal’s growing dominance need not spell doom for the environment, says Mike Mudd, a former manager of technology development at American Electric Power (AEP), one of the country’s biggest utilities. Mudd is now CEO of FutureGen, a $1-billion project sponsored by the DOE in partnership with 11 leading energy companies to build the first near-zero-emission coal plant by 2012. The 275-megawatt facility will serve as the model for a new generation of high-tech coal facilities.

Coal contains anywhere from 25 to 90 percent carbon, which combines with oxygen when burned to release energy. This process emits a host of noxious chemicals, such as carbon dioxide, sulfur, nitrogen oxide and mercury. Yet carbon in coal can also be used to strip oxygen from water, producing clean-burning hydrogen gas. FutureGen will liberate hydrogen by heating finely ground coal in a high-pressure, pure-oxygen environment, a process known as gasification and a turbine will burn the resulting hydrogen gas to produce electricity. As for emissions, the plant will pump the CO2 underground while the other pollutants are converted to an inert solid and buried.

Gasification itself is nothing new. Cut off from petroleum imports, German engineers in World War II used the process to make synthesis gas, or syngas, a mixture of hydrogen and carbon monoxide that they converted to diesel fuel. Today, about half a dozen American plants burn syngas to generate electricity. They emit about the same amount of CO2 as conventional plants but make capturing the pollutant much easier. Of the 154 new and proposed coal plants in the U.S., 28 will use gasification.

The FutureGen plant takes gasification a step further by burning only the hydrogen from syngas. The carbon monoxide is combined with steam to produce additional hydrogen, along with CO2 that will be pumped 2,700 to 16,000 feet underground into deep saline reservoirs. The U.S. alone has the geological capacity to store up to 2.2 trillion tons of CO2, roughly 1,000 years’ worth of U.S. power-plant emissions, estimates Julio Friedmann, who directs research on CO2 sequestration at Lawrence Livermore National Laboratory.

In July, FutureGen will complete environmental-impact assessments on four possible sites, two each in Illinois and Texas. It will pick a final location before the end of the year and start construction in 2009. Thanks to international efforts to rein in heat-trapping gases, and anticipated federal carbon regulations, FutureGen has attracted heavy hitters from the energy industry-such as AEP and Peabody Energy, America’s biggest coal supplier-that want to get a jump on carbon-squelching technologies. Among the alliance’s international members is the China Huaneng Group, the largest coal-based power generator in China.

But for FutureGen to make a dent in CO2 emissions, it must become the blueprint for all the coal-fired power plants to follow. And the federal government must set nationwide CO2-emission limits for power plants similar to those that are in place in other parts of the world, including Canada and Europe, as well as those under consideration in California and several other states.

Experts agree that the whole notion of trapping carbon is less a long-term solution and more a good stopgap. “Carbon sequestration you can do for 50 or 100 years,” Friedmann says. “You do it until you have other options besides burning coal-which we kind of don’t right now.”