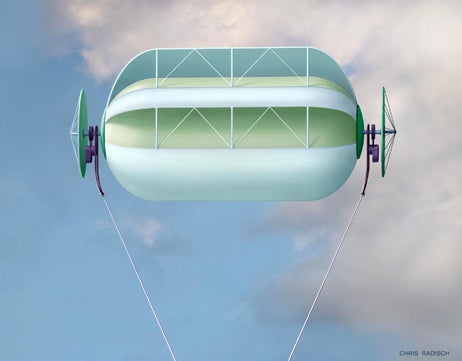 The Canadian startup Magenn Power has started testing its airship-based wind turbines. The Magenn Power Air Rotor System, or MARS, consists of a blimp-like device that is tethered to the ground, and rotates about its horizontal axis in the breeze. This action generates electrical energy, which is sent down the tether to a transformer, and eventually routed through to the grid.

Magenn says that it’s air-based turbine system will surpass all the other wild airborne wind-power schemes out there in terms of cost, efficiency and more. The advantage over ground or sea-based turbines is that the blimps, floating at high altitudes, should be able to tap into stronger, more consistent breezes. Depending upon the size of the model, it should produce between 10 kilowatts and several megawatts of power. Of course, that’s assuming that it works.

The company recently tested a scale version in a massive indoor facility, and plans to move outdoors for testing soon. The first working versions will probably be at industrial sites, with commercial versions to follow. More on how it works here.