President Obama made it clear in his State of the Union Address last week that he fears the American economy... 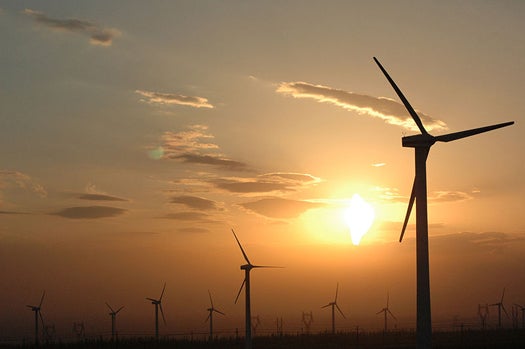 President Obama made it clear in his State of the Union Address last week that he fears the American economy is on the brink of missing out on a green tech boom that could propel us out of our current financial mess and into the coming century, and it appears his concern is well-placed. China leapfrogged Denmark, Germany, Spain and the U.S. to become the world’s largest maker of wind turbines last year, and 2010 is shaping up to be another banner year. For China that is, not for the West.

In the past two years, the Chinese have also powered past Western competitors to become the largest solar panel manufacturer in the world, leaving some analysts and economists to wonder if the West might shake off its dependency on Middle Eastern oil only to find itself at the mercy of China’s green tech dominance. Renewable energy industries are piling on the jobs — 100,000 a year according to the Chinese Renewable Energy Industries Association — and even Western companies like Denmark’s Vestas are building the next generation of green tech manufacturing facilities in China where the labor force is cheap and properly trained.

Part of China’s engine for growth is home-grown; China is, after all, its own biggest customer, investing heavily in its own energy grid ($45 billion in 2009) and is working toward semi-ambitious green energy goals (8 percent green by 2020, double its current green output). Chinese companies are also buying new equipment to create brand new streams of energy; a more mature U.S. grid forces companies to choose between using existing — and already paid-in-full — fossil-fueled generators and investing in brand new green tech, creating a financial disincentive to go green.

The result is a huge disparity between what Americans say they want and what they want to pay for. Utilities in the U.S. would have to pass the cost of new turbines and solar plants along to consumers, who want their homes powered as cheaply as possible (especially in these dire economic times). Each time a U.S. utility tries to go overseas to negotiate the best deal for green infrastructure, U.S. manufacturers and representatives in Congress cry foul. But U.S. turbine and solar panel makers simply can’t scale their operations to match the Chinese manufacturers’ sizes and prices, not to mention their cheap cost of labor.

The West’s inability to close the gap between China’s green tech industry and its own could lead to a permanent Chinese grip on green electricity infrastructure, forcing Western nations to trade an oil dependency for a wind and solar tech dependency. Last week, Obama said he wouldn’t accept “a future where the jobs and industries of tomorrow take root beyond our borders.” But if U.S. green power manufacturers can’t find a way to scale their operations and costs to reach a competitive standing with China’s economy — be it through subsidies or novel technologies or simply an acceptance by the American public that clean power just costs more — he may just have to.