Electronic Arts's football technology is good for more than playing around 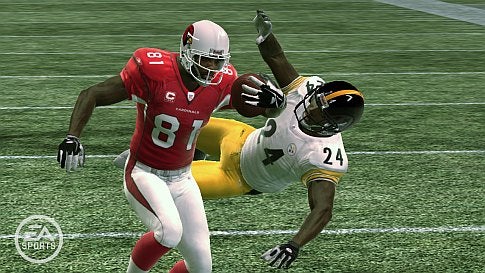 The company that claims “It’s in the game” was certainly immersed in Super Bowl week. EA Sports was busy preparing teams, educating fans, and predicting the results better than the best bettors in Vegas.

In what’s become a yearly tradition, the Madden ’09 simulator predicted the Steelers would win Super Bowl XLIII. As seven-point favorites, it was hardly a stretch, but the predicted score was 28-24. Actual score? 27-23. Not bad for a video game. While Santonio Holmes walked away with the real MVP, many pundits could argue that quarterback Ben Roethlisburger, who received the simulated honor, deserved it just as much.

Who says video games aren’t educational? A recent survey of 15,000 NFL fans conducted by the University of Oregon (with support from EA) showed that those who play Madden NFL games are 60 percent more knowledgeable than other fans. The study showed that practice does make perfect, with the calculated football IQ of participants rising with the number of hours played each week. Overall, the Madden faithful scored higher in all five categories: game situations, general knowledge, history, business of sports, and rules. Wonder if the Maddenites knew that “running into a holder” was a 15-yard personal foul?

Watching film in the video room ain’t what it used to be. For starters, there’s no more actual film, and with tools like that provided by XOS Technologies, the film room has become optional. The new Thunder system, powered by the EA Madden engine, provides a full suite of coaching capability. From storing and sifting through actual game footage to teaching and simulation, XOS combines the whiteboard and video room into a laptop-based system. XOS helped support the Cardinals in preparation for the big game. Wonder how much scouting footage they had of Santonio Holmes on a fade route?