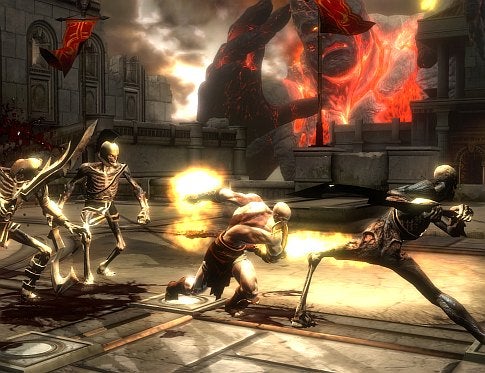 Played any good books lately? Thanks to increasingly literate scriptwriting and dialogue, today’s top video games are beginning to rival novels and films. With epics like God of War III and Heavy Rain soon forthcoming, we polled developers about gaming’s literary trend. Happily for street scholars, most insist that the future of high-tech storytelling looks bright.

“Game writers are getting better at understanding what works and what doesn’t,” explains Ken Levine, creator of haunting undersea adventure BioShock. “The challenge is to tell stories in ways that are compelling, but retain the most powerful component of what we do: interactivity, and giving the player some participation in the process.” Set in a submarine art deco paradise populated by homicidal bioengineers obsessed with reshaping humankind’s potential, the game explores more complex, nuanced topics than your standard shoot-em-up.

It’s a startling change for an art form whose previous cliffhangers essentially amounted to “Oh no — more zombies!” But as early as PSOne outings Final Fantasy VII and Metal Gear Solid, audiences could see the writing on the virtual wall. Exploring weighty themes such as love, loss and betrayal, these titles shined as much for cinematic grandeur as sweeping, multilayered action.

Witness PS2 milestones like Ico, which explores the symbiotic, handholding relationship between a helpless female captive and her young rescuer. Or Shadow of the Colossus, wherein a bereaved swordsman rides out on horseback to slay somber giants made of earth and stone in order to resurrect a sacrificed girl. Without these pioneering efforts, or equally erudite cult classics Beyond Good & Evil and Psychonauts, games’ cultural impact might be confined to footnotes like “All Your Base are Belong to Us.”

Yet while journalists and game designers continue to heap praise on such recent offerings as post-apocalyptic sci-fi epic Fallout 3 and the Blade Runner-esque Mirror’s Edge, it’s obvious that the virtual literary genre is still young. “More developers are coming to realize that a compelling narrative can support and enhance gameplay,” says scriptwriter Rhianna Pratchett, who contributed to the latter. “As a creative field though, we know there’s a hill we want to climb, but we’re still at the bottom. There’s a long way to go before that kind of dedication becomes industry-wide.”

See Grand Theft Auto IV, a benchmark for complex character development and morally ambiguous plots, which continues to be plagued by a trademark sophomoric sense of humor. Don’t forget horror adventure Resident Evil 5 either, wherein hammy dialogue and one-dimensional villains leave a brilliantly convoluted tale and its arresting backdrops smelling faintly of Velveeta. Still, pointing to well-received titles like Mass Effect and Portal, and the hugely anticipated BioShock 2, every developer we spoke with agrees that cerebral play is just coming into its own.

Or, as Mike Perry, creative director on The Godfather II, puts it, “We’re evolving at a rapid rate, and finding more ways to connect with players than ever. The future of game writing and storytelling is limitless.”