'Elite: Dangerous' is almost too immersive for the goggles it's played on 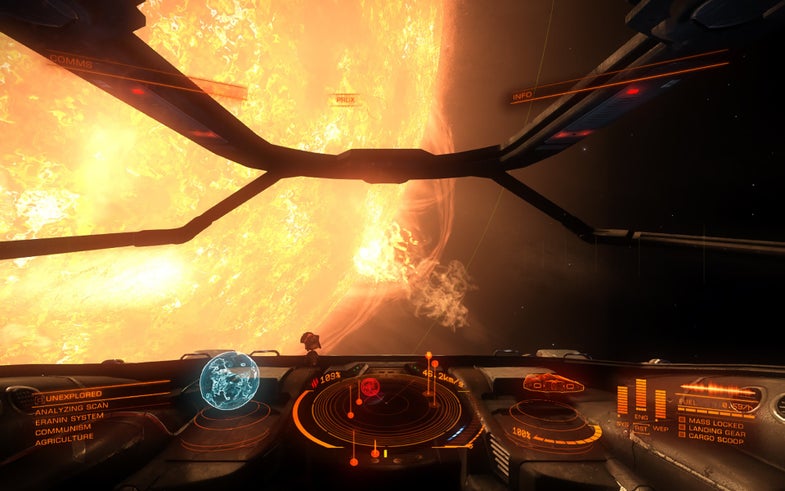 Anyone who’s tried on a consumer virtual reality headset in the last two decades knows how far short that technology has fallen from its promise. A good VR device should track head motion and alter the images relayed to each eye in real time. Anything less than that breaks the illusion of virtual presence; your brain knows how the world is supposed to look when you move your head, and when the effect fails it’s disturbing and even nauseating for some users. So far, that broken reality has been the norm for VR, and the technology has stalled.

The Oculus Rift is supposed to be the system that changes all that. It comes equipped with 3D-stereoscopy, lag-free visuals, and precision head tracking. Of course, techies have followed every detail of the product’s development (and every video of a beta-tester freaking out on the internet) with mounting glee.

So, when I got invited to play Elite: Dangerous on the Oculus Rift Development Kit 2—the most advanced VR headset yet to emerge from the Oculus labs—I’ll admit I was more interested in testing out the hardware than the game. Sitting sandwiched between Elite CEO/designer David Braben (also of the Rollercoaster Tycoon trilogy) and his vaguely Cumberbatchian PR manager, Michael Gapper, on a small couch in a New York City hotel room, I felt a strong urge to blaze through the video game interview to try on the Oculus hardware.

But then Braben started talking about the world he created.

A MMORPG Is Born

At first glance, Elite: Dangerous, which launches December 16, looks like just the latest in a long line of wannabe massively multiplayer online roleplaying games (MMORPGs). While conventional video games can succeed without accumulating tons of fans, an MMORPG lives and dies by its number of users, similar to a social network. You might love the idea of Ello, but if all your friends are on Twitter and Facebook you’re unlikely to make the switch. (In the gaming world, this effect is best illustrated by the bizarre persistence of the original Runescape, a world offering such bountiful pleasures as “hours and hours of hitting rocks with pickaxes”, “mind numbing, redundant sword fights”, and “more hitting rocks with pickaxes”.) Similarly, how likely are you to buy a subscription to a new fantasy world if all your friends are busy slaying dragons in World of Warcraft?

And Elite: Dangerous is entering a space MMORPG market already saturated with an existing product—Eve Online. The multiple-award-winning, 11-year-old juggernaut boasts a universe of more than 500,000 active subscribers and arguably the most complex virtual economy in existence. 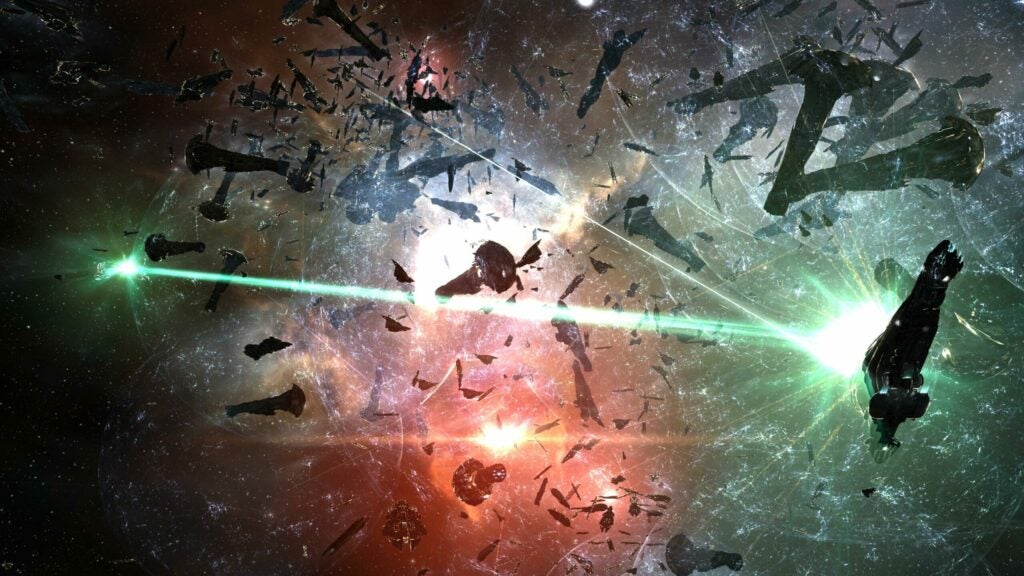 The Battle Of B-R5RB

Elite: Dangerous, despite its pedigree as the fourth installment in the groundbreaking space-economy series that inspired Eve, doesn’t obviously bring much new to the table. Like Eve, players explore a resource-rich galaxy mining, trading, and killing to accumulate enough wealth for starship upgrades. Unlike most games that earn the adverb “massively” in “massively multiplayer”, it failed to secure a major production company’s backing and turned to Kickstarter for support. (They met their £1,250,000 fundraising goal by offering backers early access and in-game rewards.)

Braben comes off more like a research scientist than a video gaming legend. He seems a lot less interested in the awesomeness of player battles than in creating a scientifically and politically realistic universe—at one point becoming so sidetracked by a comparison to the flawed science of tides in the movie Interstellar that Gapper jumped in to steer him back on course.

The game is set in a scale model of the Milky Way, thousands of years in the future. Every one of the 160,000 known stars shows up in its correct position, and the developers built sophisticated mass-distribution software to create the billions of stars that remain undiscovered. The game engine factors in scientific concepts as far ranging as volcanism, gravity, tides, and planetary chemistry to determine the makeup of each star system. Even the gravitational lensing around a black hole made its way into the code.

If Eve Online is the Star Wars of the MMORPG multiverse, Braben wants Elite: Dangerous to serve as its Space Odyssey.

That sci-fi realism extends to gameplay. Ships, asteroids, and other stellar debris move according to the laws of Newtonian physics (with a bit of fudging to allow for faster-than-light travel, Braben acknowledges, perhaps begrudgingly). Space stations rotate to generate centrifugal “gravity,” and exhibit linearly variable forces along their spokes. In flight, skilled players can disable pilot assist systems and fire each of their thrusters individually, executing some spectacular stellar ballet.

What’s most impressive, to me anyway, are the game’s procedurally-generated backdrops. Most video games use digital paintings or rough algorithms to build their skies and horizons. These visuals may be beautiful at first glance, but they’re generally fairly predictable and static. Elite: Dangerous ditches those methods. Orbit Earth in the game and you’ll see the Big Dipper, Orion, and the Pleiades shining against a majestic Milky Way. Head to a nearby star and you’ll discover a similar view, subtly shifted to account for your new position in space. Cross the galaxy and everything moves—in three dimensions—to portray that system’s alien sky.

A fair question would be: why does realism matter? A game is a game. Halo players don’t complain about their “Master Chief” avatar’s unlikely ability to survive falls. Bioshock: Infinite featured some stunningly artistry, though anyone who’s played it through probably noticed its lack of attention to the realities of physics and history (think giant, armed mecha-George Washingtons hunting you through an airborne colonial American city).

But, as the gaming industry enters its fifth commercial decade and appeals to a wider audience than ever, this diverse generation of gamers seeks diverse, layered stories and experiences. If Eve is the Star Wars of the MMORPG multiverse, Braben wants Elite: Dangerous to serve as its 2001: A Space Odyssey. (He made a point of including “The Blue Danube“, the score of the film, in the game trailers.)

All that said, none of that meticulous artisanship would matter if the game wasn’t fun (if we’re being totally honest here, I fell asleep during 2001).

The first thing I discovered when I slipped on the headset? Its incredibly weird to be half-deaf and blind to a roomful of people watching your reaction to their personal passion project. Once I got past the initial claustrophobia though, I was hooked.

For the demo, a Frontier technician dropped my ship in the middle of an icy asteroid field, and I caught myself absorbed in the feeling of exploring space firsthand. The best analogy wouldn’t be to another video game but the spaceflight simulators at NASA’s Johnson Space Center in Houston. The Oculus certainly contributed to that sensation—the perfect head tracking really is an engineering marvel—but I soon found myself wishing I was using the 4K screen on which everyone else in the room was watching my progress. On a screen that close to my face, the black grid of space between pixels wrecked even Elite: Dangerous‘s tailored graphics, and colors swam weirdly out of sync across my field of view. Also, it’s deeply unnerving to watch your avatar’s simulated hands move of their own accord, out of sync with your own. 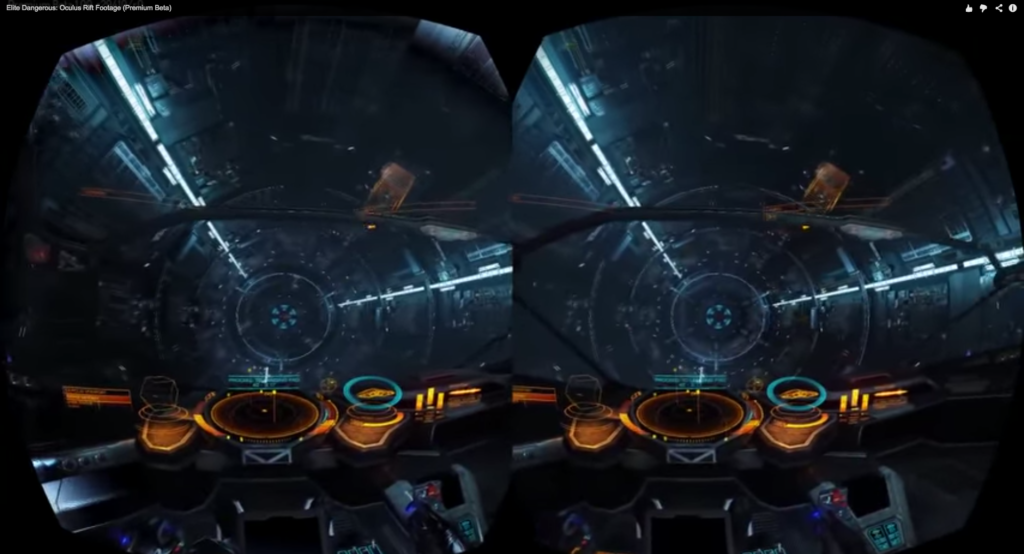 A screenshot of the stereoscopic image for the DK2 that looks, in this writer’s opinion, much better than the reality.

Still, with some prompting from the tech, I found myself engrossed in a one-on-one dogfight with an enemy ship. Dipping and dodging through the asteroid field, picking up a few of the nuances of the ship’s thrusters, my heartbeat rose higher than I can ever remember playing a video game. When my electronic opponent’s vehicle destructed in a flash, I threw my arms in the air, cheering.

Will the science, strategy, and story of Elite: Dangerous attract the playership it needs to survive when the game opens up to general subscriptions? I can’t know. But at the end of a year that saw two sci-fi blockbusters, Interstellar and Gravity, that sold tickets not with little green aliens but science-driven tales of NASA astronauts, its a good bet that plenty of folks are itching to get their hands on a space sim this real.

Braben, meanwhile, is unabashedly proud of what he’s built. “If you had told me when I was 15 that there would be no cities on the moon by now, with the rate things seemed to be going, I would have been really disappointed,” he says. Releasing an army of humans into the galactic future seems like his stab at bringing that fantasy closer. 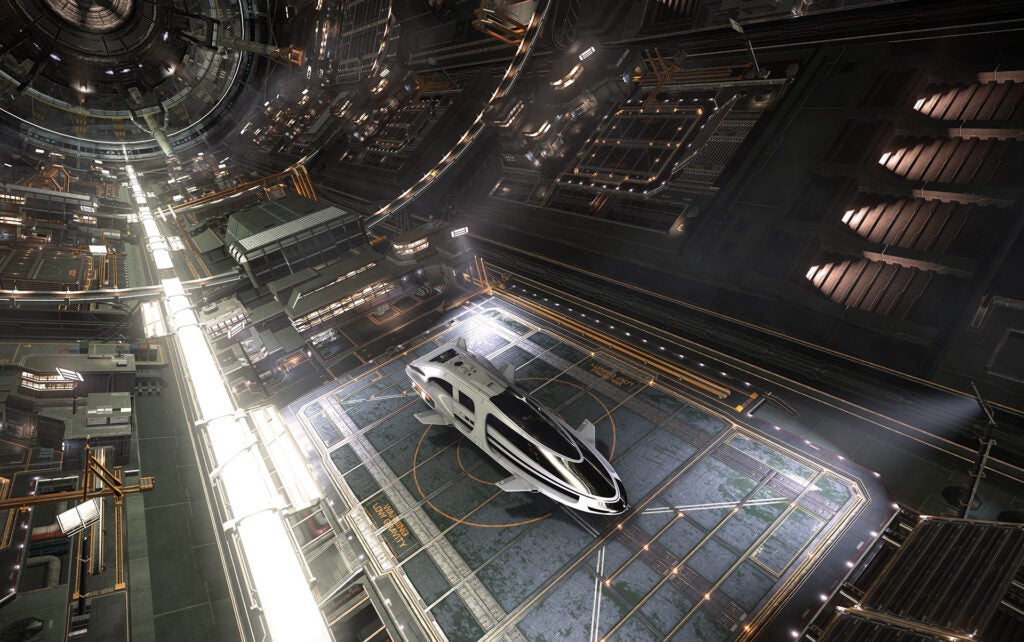 A player ship sits in the microgravity of a slowly rotating space station. 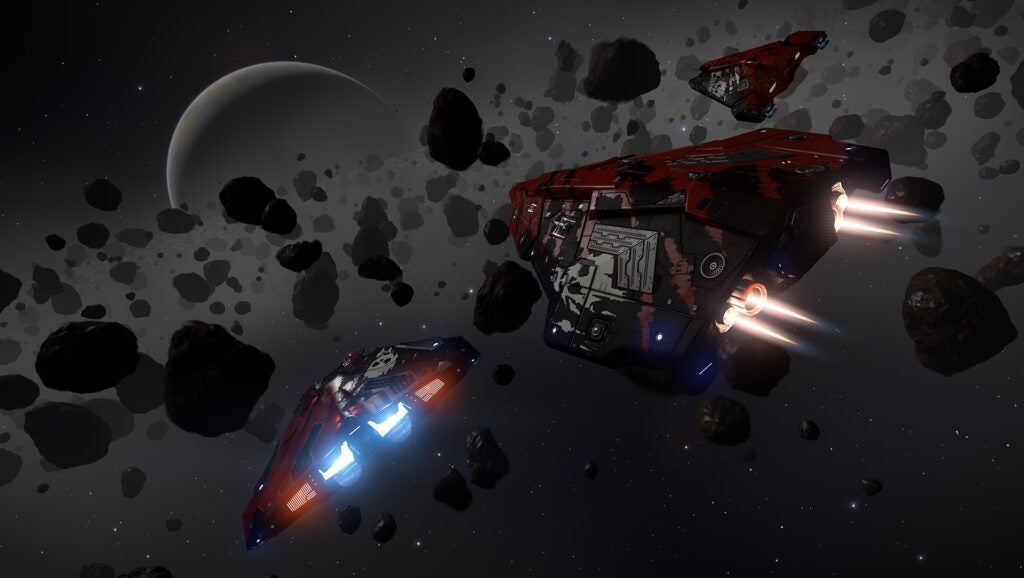 Pirates stalk through an asteroid belt. 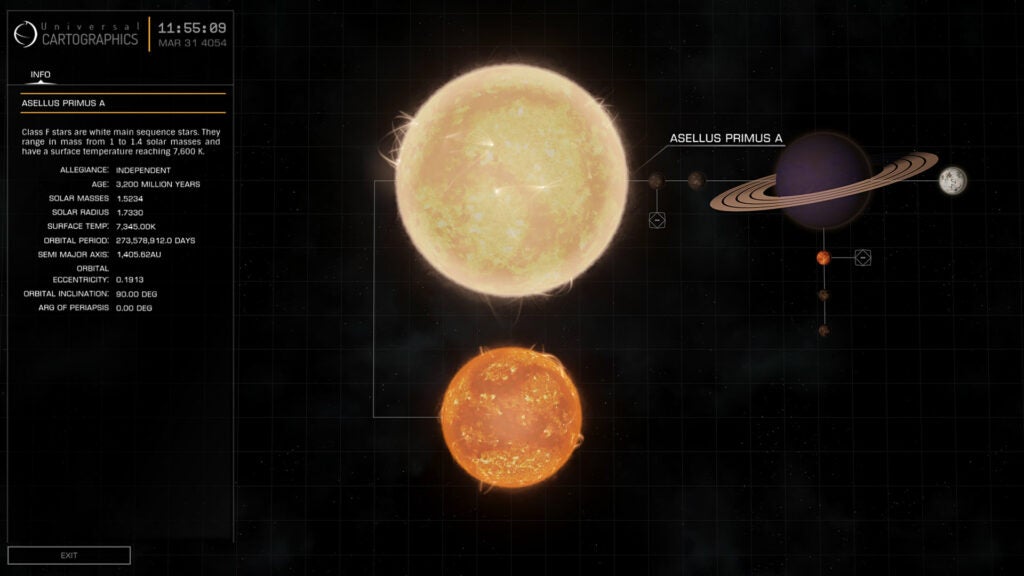 An in-game map of the Asellus Primus system, a real star about 47 light-years from Earth. 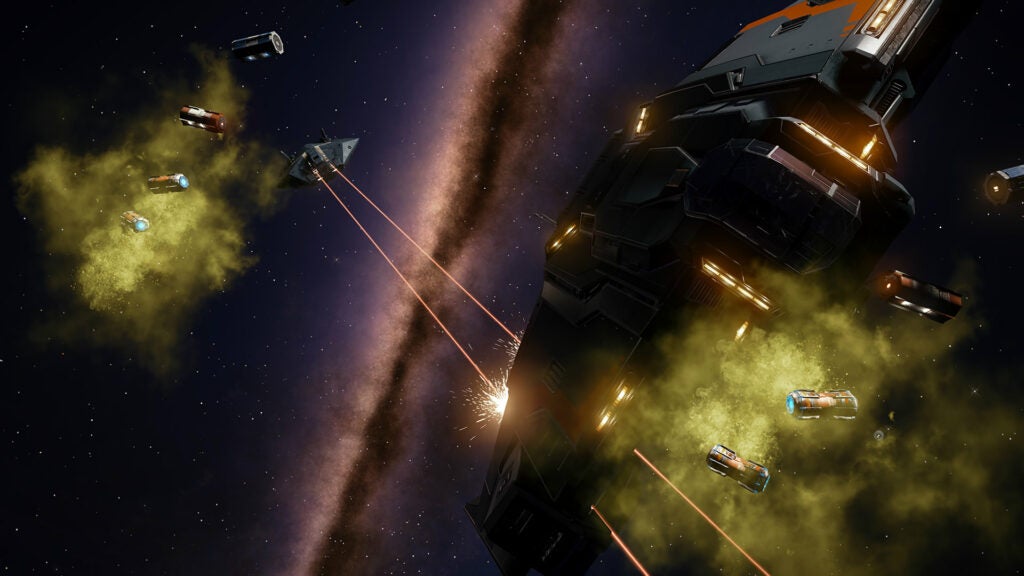 Battling it out with the Milky Way in the background. 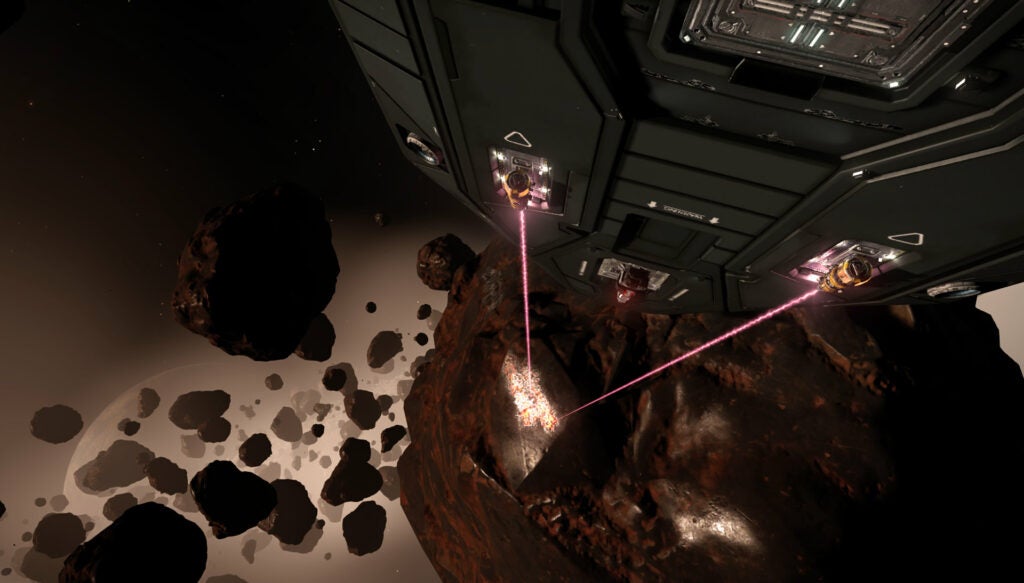