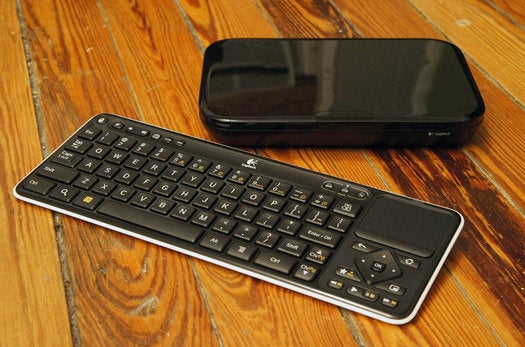 Getting the internet on your TV used to be so complicated that all but the most savvy tech-lovers (or struggling, geriatric WebTV users in 1997) didn’t even bother. But now that we get more of our video from the Web than ever before, the Powers That Be have deemed it time to bring the two worlds together yet again. The first Google-ready home-theater equipment is rolling out now, so we spent a couple days with Logitech’s Google-TV-ready Revue set-top box so see what happens when worlds collide. All told, Google has done what it’s advertised in a more seamless way than anyone has before, but a few hiccups keep it from playing nice with everything you’ll wanna watch.

Google TV is the first search engine for your TV. A Google TV (GTV) capable device is one that will allow you to search and view Web video on your TV without having to connect to a computer. The first such device is the Revue by Logitech. The small Intel Atom-powered box nestles itself between your existing cable box and your TV, overlaying GTV’s engine atop your own cable feed. What’s special, though, is how the overlay is done: Google has not only brought its omnipresent search bar onto your TV screen, but built an entirely new indexing system specifically catered for Web video streaming and searching. Taking listings from your cable company and the Web and marrying them into one source-agnostic results page. “I don’t care where my stream of Community comes from, I just want to watch it now.” That’s the underlying premise of Google’s seemingly seamless integration of two different content sources.

Shows’ Index Pages: When you enter the title of a show into the GTV search bar, you aren’t met with the usual Web-style list of random websites and blogs; what you see, rather, is a pulldown menu of sorted links. If there’s an air date of the series upcoming, it will appear at the top of the list. Following that is a result labeled “series” which sends you into an index page with a show summary and an index of all the current episodes with links to the various sources that carry them. A grid displays what shows you can see on live TV, what you can stream for free, and what you can stream for a price from a service, such as Amazon Video On Demand. Grabbing all those network streams, though, is a trickier proposition (more on that later). 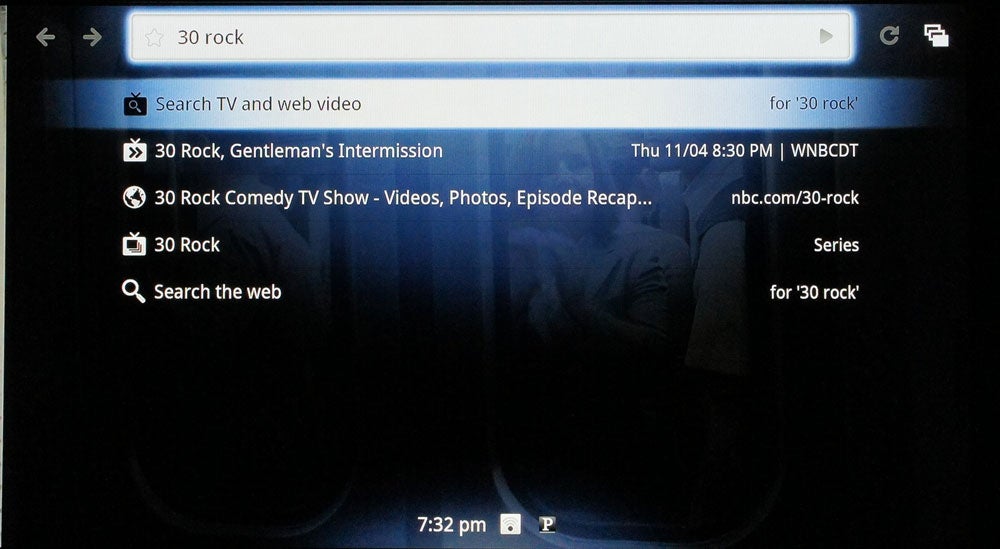 Pressing the dedicated search button on the keyboard pulls up the oh-so-familiar search bar atop whatever screen you’re on.

Smart Display: Even if you’re not searching for a series, GTV’s default engine creates an index page of videos relating to almost any search query (be it an actor, film, place, what have you). Entering “Morgan Freeman,” for instance, brings you to a thumbnail-based spread of movies he’s in that are available to watch (either though channel guides or streamed from the Web). Below that is a listing of Web video clips matching your keyword search, accompanied by thumbnails. You can also, naturally, choose to do a plain ol’ Web search, which will bring you to the regular Google homepage. 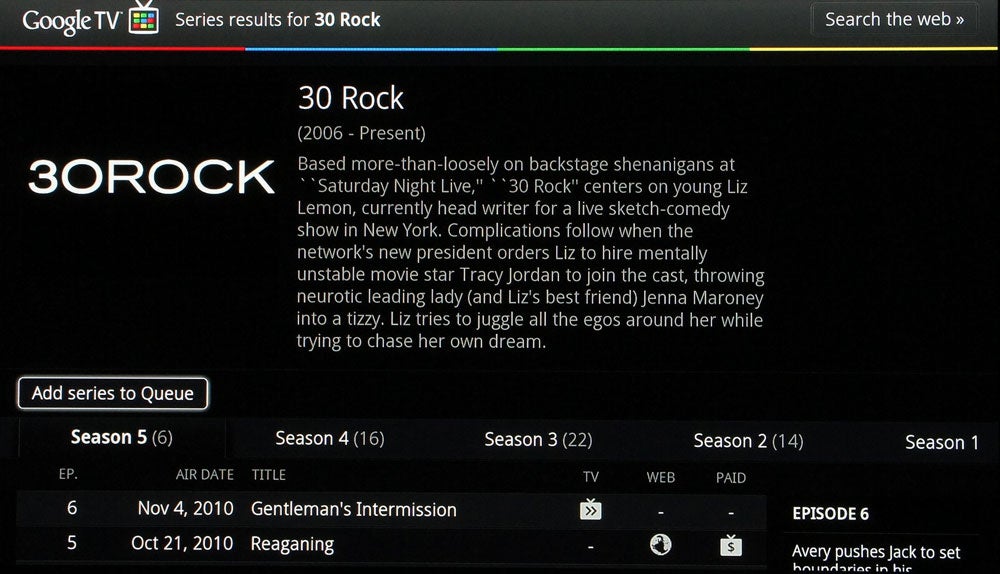 All TV series have their own index pages, with a show summary and an index of all its episodes.

Queue: Think of the GTV queue as a DVR for video streams. When you land on a show index page, there’s an option to “add series to queue.” This will then add any new uploads of episodes of that show to a queue on the GTV home screen to let you know there’s new content ready and waiting.

Picture in Picture: You can do anything you like in the GTV interface and still keep a live TV image in the corner of your screen. Say you’re watching a live NFL game and want to check on your fantasy team: hit the PIP button on the keyboard, fire off a search in the integrated Chrome browser, and check you stats and watch the game on the same screen. 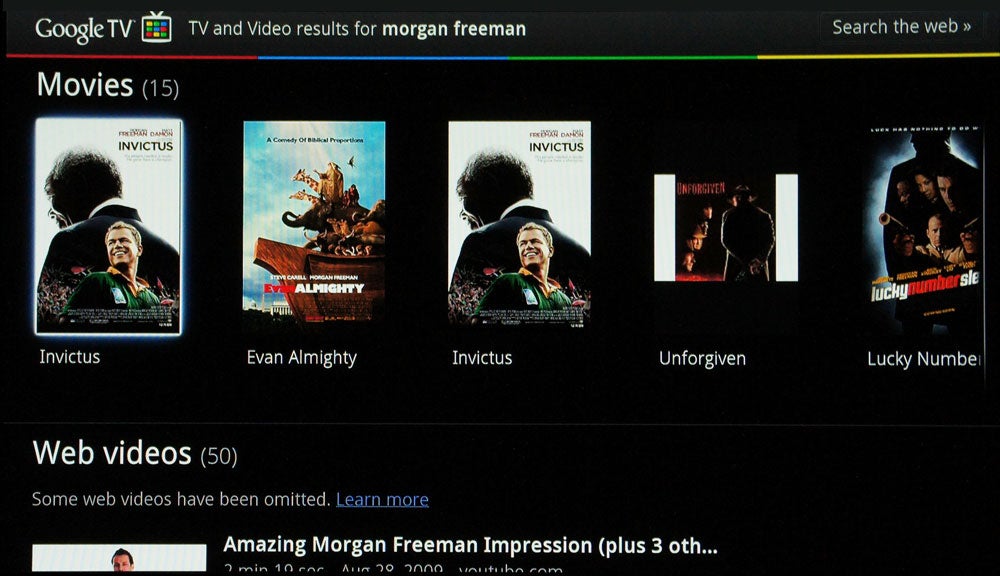 Google TV Ready Sites: Several sites, most prominently the Google-owned YouTube, have re-coded their sites to be GTV friendly (much like sites designed to be easy to use with a Wiimote). Instead of having to browse to them in Chrome, each site has been re-skinned for GTV, using it as a portal. YouTube Leanback, for one, instantly launches videos into full-screen high-def with related-video thumbnails strung across the bottom of the screen.

What’s On: Say you’re in the mood to watch, I dunno, something, but you’re not sure what. The What’s On menu sorts whatever’s on the air right now into categories. In the mood for a movie or football game? Each one is listed individually along with its channel and how much of the airing is left. 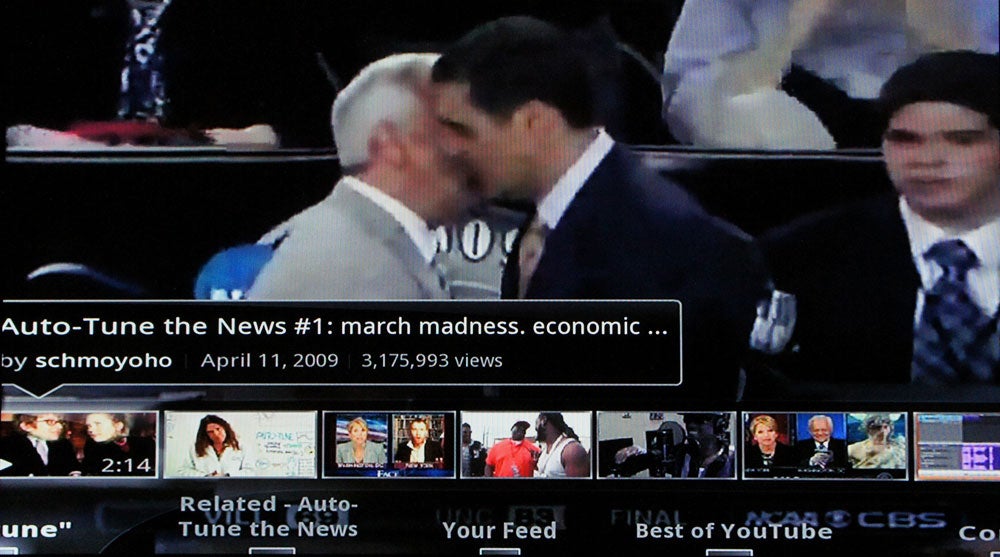 YouTube’s Leanback site has been specially coded for GoogTV; it launches into full-screen HD automatically.

The Keyboard: Kudos to Logitech. Their GTV remote, as all are required to, has a full QWERTY keyboard, but this one is especially comfortable, so much so that I was able to do the lion’s share of my navigating without ever having to look down. The layout of the directional keypad is intuitive, and the integrated search button pulls up the search cue no matter what screen you’re in.

Lack of Network Streams: It makes perfect sense that the major TV networks (ABC, NBC, CBS and Fox) aren’t huge fans of GTV; they want to have full control over their shows being piped into our living rooms–and hopefully make some money in the process. And while watching a free Web stream on NBC.com on your laptop may not seem drastically different than doing it on your Google TV, to the networks that’s a terrifying proposition. Think of it this way: why would anyone even need a broadcast if they can just search and instantly play a free Web stream the day after on the best screen in the house? You don’t even need a DVR to time-shift anymore. So, naturally, most of the major networks have blocked GTV from streaming their Web content, and only sad “this video cannot be played” boxes appear where your Modern Family stream should be. In essence, this is currently hamstringing the very heart of GTV. We hope soon they’ll all find a way to play nice. Oh, the same goes for Hulu, too, kids.

Apps: The same complaint can be made of GTV as can any new platform: there’s not enough being done with it–not yet. Out of the box, GTV has a small suite of apps, and for the most part their content isn’t is particularly robust. Netflix is the main offender; you can only access your instant queue–no search, no recommendations–which is miles behind the leading Netflix integrations on the Xbox 360 and Apple TV. It’s especially sad in comparison to Pandora, which has full functionality of the website. Still, developers are hard at work coding the next-gen of GTV apps, so hopefully this improves soon.

Browsing: While anything that will render in a Chrome browser will display in gorgeous high-def through GTV, using it for general-purpose surfing is not ideal. Sure, we were able to load Facebook and PopSci.com easily enough, but navigating through links with a tiny pointer on a massive screen can be a frustrating experience. Stick to pre-programmed GTV Web-based apps and their more user-friendly large buttons and fonts.

Integration: Almost there… While Google TV can search your guide, unless you have DISH Network, it won’t play nice with your DVR. On our TimeWarner box, it could see upcoming listings for shows, but couldn’t tell us if we had it recorded and saved locally, nor could we tell our box to record a particular show airing right from the Google TV menus.

$300 for the Logitech Revue box and keyboard.

It’ll be interesting to see where GTV goes once its place in the home-entertainment marketplace settles down–along with networks, of course. What’ll be most interesting, though, is to see how developers use its SDK to create new, interactive apps. Given access to closed-caption information, a script could easily be run that live translates all the dialogue into any language Google Translate supports. Or, IMDB entries can be automatically linked to guide listings based on metadata and keywords. The key for those apps, though, is focus; this is not a gaming platform, nor is it a place to deal with text. Google TV is just that: TV from Google, with the TV first, Google second. A strong focus on media, video streams, and dynamic content will be what helps the platform truly shine.