Football in Your Face

3D brings the game closer than ever 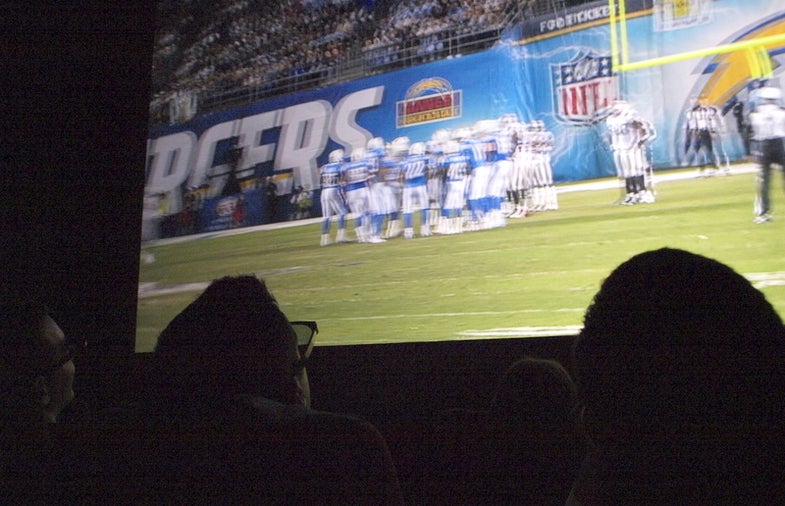 I’ve watched some football over the years, but I’ve never seen an NFL game live from the stadium. And I’ve certainly never stood right on the sidelines or in the end zone when a running back finds a hole in the defense and sprints through for a touchdown — until last night. Of course, until then I had also never seen the screen go blank twice in the first half, suffered from double-vision and eyestrain, or seen frightening images of a hermaphrodite jump out at me.

Such were the high and low points of last night’s game between the San Diego Chargers and the Oakland Raiders — the first NFL game to be shot and broadcast live in 3D. Though there were some glitches, it went pretty well for an experiment that had never been tried before. “This is an alpha test,” said Peter Shapiro, a co-founder of 3ality Digital, the game’s broadcaster. “It may not be perfect, but we hope to change the game.”

It’s not that 3ality hasn’t been working on the technology for a while. They first filmed an NFL game in 3D back at Super Bowl 38 in 2004, with the intent of making a documentary. But the original digital 3D cameras were too big and hard to maneuver, said Howard Katz, the NFL’s VP for broadcasting and CEO of NFL films. “They couldn’t shoot the style we wanted.” (3aility is now on its fourth generation of camera technology.)

But that experience did give 3ality the knowledge and incentive to produce U2 3D, a stunning 3D concert movie that hit theaters in January 2008. Of course with a movie, 3ality had plenty of time to get things right. “It’s one thing to make a film and shoot and then go into post-production and perfect issues like convergence and depth balancing…color matching,” said Shapiro. “Every 3D film that you’ve seen today has gone through months and months of post production. To do it live requires another level of sophistication.”

Considering that, the alpha test went surprisingly well. The biggest problem was with the Technicolor satellite broadcast. It dropped out twice for extended periods — including one time when the screen showed a 3D test pattern that, with our polarizing glasses on, displayed a bearded man to one eye and a woman in the other. (Who thought that one up?)

A 3ality representative dismissed the dropouts as a problem with “2D satellite technology,” unrelated to the 3D broadcast. But that’s a hard one to verify, since the broadcast was doing something very different with the satellite system. To capture 3D images, the company used eight double cameras that mimic human stereo vision. Placed about as far apart as human eyes, the two cameras in each unit photograph the action from the perspective of someone’s left and right eye.

Those two perspectives are sent individually over the satellite as conventional 2D video streams in what 3ality calls a “double bounce.” At the receiving end, a digital projector rapidly alternates the left-eye and right-eye video streams (144 times per second) then passes them though an LCD polarizing filter that switches for each video frame, polarizing the left-eye perspective in one direction and the right-eye perspective in the other. Outfit everyone in the audience with polarizing glasses, and they see in each eye the same views that the original two cameras picked up.

The theater portion was handled by a company called Real D that makes the software, polarizing LCD screen and glasses. Real D equipment is set up in 1,550 theaters in the US, and it has contracts to outfit 5,500 more in the next two years. If you’ve seen any of the recent digital 3D films, such as Journey to the Center of the Earth, Beowulf, or Meet the Robinsons, you’ve probably seen it on a Real D setup (though some also show on film-based IMAX, and Dolby recently came out with its own digital 3D format).

In general, the system worked quite well. Most of the critiques I heard in the audience were not about technology, but technique. Some things look amazing in 3D. Best of all were the instant replays. Watching in 3D showed precisely how a tackle went down, or how the ball got knocked out of the runner’s hand in a fumble, or where the defensive team left a hole that the player shot through for a touchdown. Basically, it was great for the close-up shots.

But often in football, you need the big picture. What offensive formation is a team using? Who was that guy at the end of the line who jumped off sides? The zoomed-out view doesn’t look bad in 3D. It just doesn’t look especially three-dimensional. (Beyond a certain distance, our left and right eyes are seeing pretty much the same thing, and there is little perception of depth.) In their enthusiasm to capture the most “3D” perspectives, the camera operators from NFL films missed some of the shots that would be most interesting to football fans.

Then there’s the problem of priority. In a 2D broadcast, you tend to focus on what’s in the center of the screen — which, if the camera people are doing their jobs, is the significant action. In 3D, you focus on whatever appears closest. So when the cameras were shooting from the sidelines, I couldn’t help but focus on the big orange down marker that popped up under my nose, or the random security guard who was standing in the foreground. There may not be a technological fix for this. It might just require better camera placement and more zooming in to cut off random details in the foreground. (But then, of course, you might lose that big-picture wide perspective again.)

Though far from perfect, the game was still a novel, impressive experience for the handful of people who got to see the limited broadcast at theaters in LA, Boston, and New York. (More exciting than the game itself, in which the Chargers flattened the Raiders, 34 to 7). I’d gladly do it again. And I may get that chance, along with many more people, next month. “We are working on something for January,” said Real D’s president, Joseph Piexoto. He didn’t give many details, aside from explaining that it will be a live event that is “more public-oriented,” meaning for a bigger audience in more locations. But, he said, “Until everything’s signed and sealed, I can’t really say.” 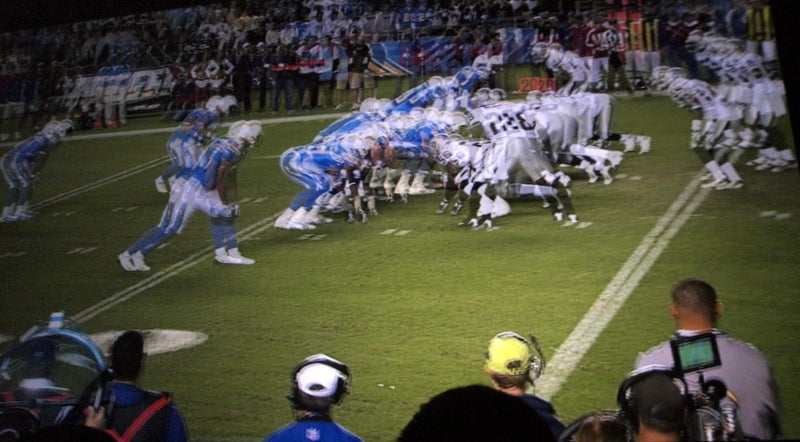 A camera has only one eye, hence the double image showing both the left and right eye perspectives together on one screen. 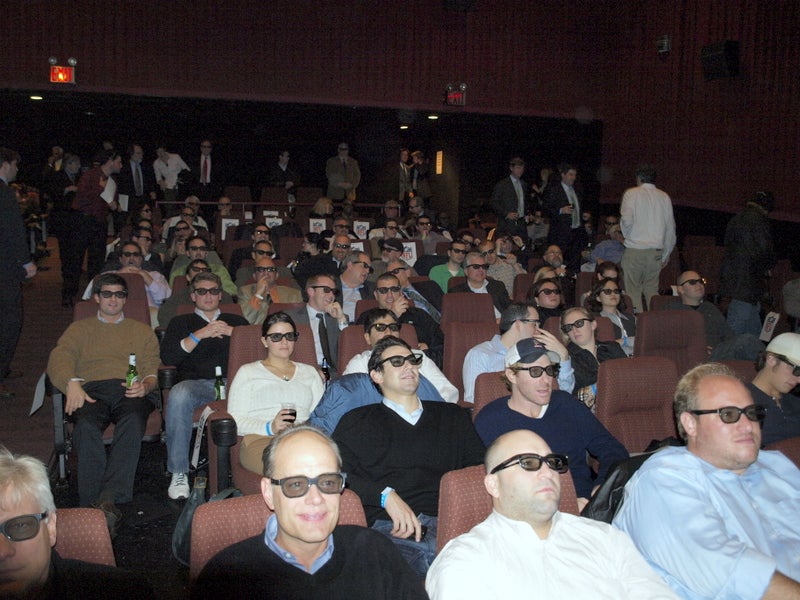 But with polarizing glasses, the two images are split between your eyes, creating the illusion of depth. 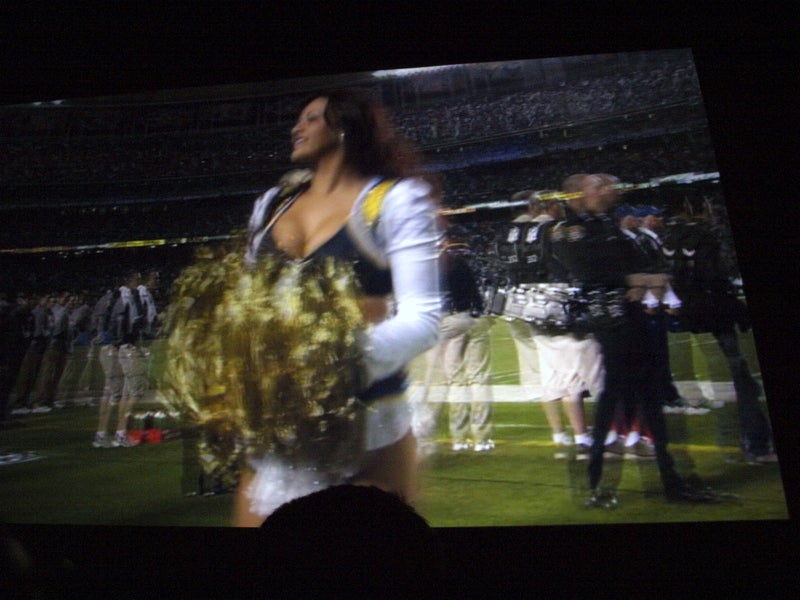 Buxom cheerleaders popping out in 3D were a big hit with the audience. 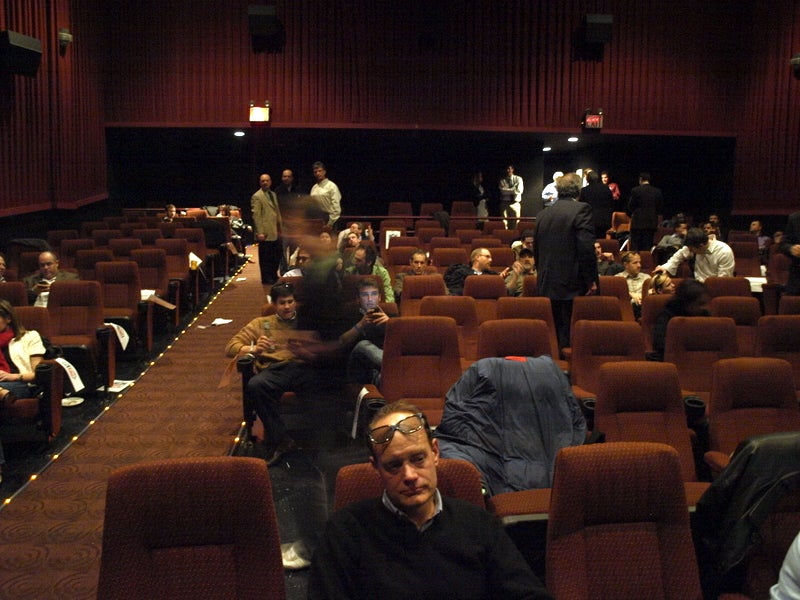 But by halftime, most people had seen enough and gone home.