Freight trains are our future 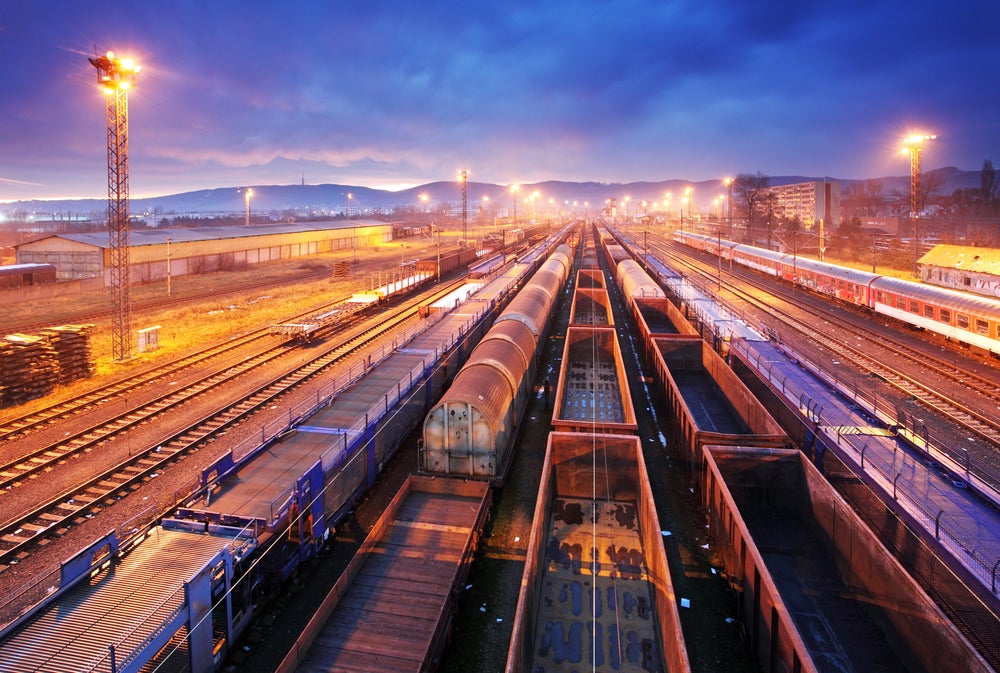 The following is an excerpt from “Power Trip” by Michael E. Webber.

One of the simplest and most powerful ways to address transportation’s energy challenges is to reinvest in freight railroads. Freight transport is a much bigger part of the nation’s infrastructure than most people realize. In 2013, about $50 billion worth of goods was transported as freight cargo every single day in the United States alone. Trucks move 29 percent of the freight ton-miles, but are responsible for 77 percent of the sector’s emissions. Astonishingly, empty trucks account for about one-fifth of the truck miles traveled. Between the rise of Walmart with its truck-based logistical system and the spread of internet-based retailers such as Amazon, highway freight tonnage grew by 45 percent between 2000 and 2014. According to the US Department of Transportation, the existing population of trucks on congested highways already substantially impedes interstate commerce, and projections suggest highway congestion will get much worse in the coming decades.

Mass transit for commuters and high-speed passenger rail get a lot of attention and capture the imagination, but it is the more mundane movement of goods that presents a worthwhile opportunity for system-wide improvement.

Trucks are convenient because they enable flexible point-to-point operation, but they are relatively inefficient, dirty, dangerous, and destructive to our roads. Rather than wait for some still-unrealized technological breakthrough, we could instead expand our national freight rail system. At first blush, it would be easy to believe that freight rail’s day has passed. From its peak a century ago at more than 250,000 miles, today there are fewer than 95,000 miles of track for Class I railroads, as rail lost market share for the movement of people and goods to air travel and the interstate highway system. From 1990 to 2013 alone, the US population increased 28.2 percent while track miles decreased 28.6 percent, despite increases in shipping and freight movement.

That decline didn’t just happen. It was a policy choice carried out over decades. The decision to invest trillions of dollars in the interstate highway system was a vote for trucks over rail. Today, the national freight transportation infrastructure has about $6 trillion in assets, with more than half that total locked up in highways. In contrast with private-sector trucks that operate over public highways (making the interstate highway system essentially a subsidy by taxpayers for trucking companies), the freight railroads are almost entirely private.

Since revenues bottomed out in the 1970s, financial restructuring enabled the railroads to invest in better efficiency. Consequently, revenues and profit have risen for decades despite the decreased trackage available. American railroads have become extremely efficient and productive, moving increasing volumes of freight over a shrinking infrastructure.

Rail moves 40 percent of freight as measured in ton-miles but is responsible for only 8 percent of freight transportation carbon emissions. Even though both trucks and locomotives use the same fuel—diesel—railways emit less CO2 per ton-mile of freight movement because rail is much more energy-efficient than trucking. By one estimate, moving freight by rail instead of trucks could save up to 1,000 gallons of fuel per carload.

And freight rail has the potential to get cleaner more quickly than trucks, ships, or planes. According to the Bureau of Transportation Statistics, the median age of the 25,000 locomotives in the United States is less than thirteen years, so natural fleet turnover patterns offer a chance to bring in newer, cleaner versions. That means the rail fleet can be cleaned through investments in just tens of thousands of locomotives, compared with more than 10 million heavy-duty trucks on the roads today. For instance, switching locomotives to compressed natural gas could reduce emissions while reducing imports of crude oil.

To be sure, trucking is great for the last few miles when delivering goods. That capability is useful, as most of us do not live next to train tracks. But more than two-thirds of freight travels more than 500 miles. Rail transportation is so efficient that even if cargo must travel a longer distance by rail than it would by point-to-point trucking, shipping by rail still uses far less energy.

Transferring freight cargo by rail instead of by truck is also safer. Freight transportation is responsible for approximately 100,000 injuries and 4,500 fatalities each year, and trucks are responsible for 95 percent of those injuries and 88 percent of those deaths. Most of the people killed by trucks are in passenger vehicles sharing the road with 18-wheelers. A study in 2013 concluded that the additional risk of fatalities from heavy trucks is equivalent to a gas tax of $0.97 per gallon.

By contrast, rail transportation is responsible for about 4,000 injuries and 500 fatalities, the vast preponderance of which were from trespassers on the railroad right-of-way.

Not only will roads be safer, but they will be in better condition, too. The Highway Trust Fund that provides money for maintenance and repairs goes broke every year because revenues (collected via a tax on gasoline and diesel fuel) haven’t kept up with expenses. One way to provide the trust fund with enough money is to raise the gasoline tax, set at 18.4 cents per gallon in 1993. Another way is to reduce the wear and tear by removing the heaviest vehicles. Damage to roads scales with axle weight to the third power. So one 40-ton truck causes more than a thousand times the damage of a typical 4,000-pound car. As one seminal study noted, “For all practical purposes, structural damage to roads is caused by trucks and buses, not by cars.”

Until recently, the freight railway network was being stressed on many routes by hauling coal from fields in the western United States to power plants around the country. Coal trains are huge: 100 hopper cars that can each carry 100 tons, all pulled by six locomotives, each with 3,000 horsepower. In terms of ton-miles, coal still comprises the single largest commodity moved by the freight rail system. Coal’s decline in the power sector as it is displaced by cheaper, cleaner natural gas, wind, and solar power opens up spare capacity in the rail system that could be used for moving other goods.

Those railroad right-of-ways from the western coal fields to the East also have potential as routes for alternative energy. Following up on the old idea of lining train tracks with telephone poles, we could couple rail lines with a national high-voltage direct current transmission network, spanning the heart of the windy Great Plains and sunny Southwest, thereby enabling better integration of renewables, cleaning up the power sector further. We could even put those power lines underground to reduce their vulnerability to windstorms. Since the best solar and wind resources are often far from major demand centers like large cities, developing a national grid that can easily move power around would be advantageous.

Not only would a nationally coupled rail and power-line network reduce emissions and spawn more rural economic development, but it would also improve grid reliability. Laying electricity along the tracks also opens up the door for electrified freight trains. Such trains are common in Europe, and it may be simpler to electrify freight rail transportation than to build out the charging infrastructure for electric road vehicles.

The rail system sprawls across the continent, so many of the economic benefits from a return to freight rail would accrue to rural areas. In addition, locomotive engineers make about 30 percent more per hour than truck drivers. Even the other jobs—rail yard engineers, signal and switch operators, conductors, and so forth—pay more than driving trucks. Those higher wages would have economic benefits that rippled out. Seeking job growth for these roles is an enticing idea.

One simple way to encourage the switch from road to rail is to put a price on carbon. A carbon tax would harness the efficiency of markets while sending a price signal that rewards the more energy-efficient and cleaner option of rail transportation. Another approach—one that wouldn’t also put motorists in the crosshairs—would be to raise money for road maintenance via a fee based on miles driven and vehicle weight. That would target the vehicles that do the most damage and stop the subsidy of heavy trucks by the drivers of small personal cars. By more closely aligning the costs with the damage, trucking would lose some of its competitive advantage compared with rail.

A carbon price and update to our gas tax model would likely encourage a lot of switching to rail for freight, but increasing throughput (ton-miles) on rail without other improvements could degrade other key performance metrics such as delivery time and reliability. Since many freight customers are very sensitive to those factors, commensurate investments have to be made in optimizing performance, double-tracking where possible, adding new tracks, and alleviating bottlenecks.

Expanding track miles is an obvious step forward, though not the only one. Adding more sidings or double-tracking at congested zones can facilitate the operation of more trains in different directions and allow trains operating at different speeds to more easily share the same track.

But just laying a lot more track isn’t enough. As a pair of major studies by the RAND Corporation in 2008 and 2009 noted, increasing the national freight rail capacity will require a variety of strategies beyond direct infrastructure investments. Such measures include revising regulations, flexible pricing, deploying new technology, and implementing improved operating practices. For instance, operational enhancements to more efficiently use existing tracks might be just as important as building more miles of track, but those changes need to be informed by more detailed and extensive modeling to identify locations of bottlenecks and to develop schemes that avoid them.

Another way to increase capacity while cleaning up the transportation sector is to enlarge and improve the fleet of locomotives. Incentives for rail companies to buy newer, cleaner, more efficient locomotives would simultaneously clean up and expand capacity. Partly because of this potential, the International Energy Agency noted that the rail sector can play a key role in reducing global CO2 emissions. More routine and detailed inspections of rail systems can also improve safety and throughput by allowing heavier freight loads and faster train movement.

In the end an old idea—moving goods by rail—might be the modern innovation we need to reduce energy consumption and avoid CO2 emissions while making roads less congested, safer, and more enjoyable for motorists.

Adapted excerpt from POWER TRIP: THE STORY OF ENERGY by Michael E. Webber. Copyright 2019. Available from Basic Books an imprint of Perseus Books, a subsidiary of Hachette Book Group, Inc.