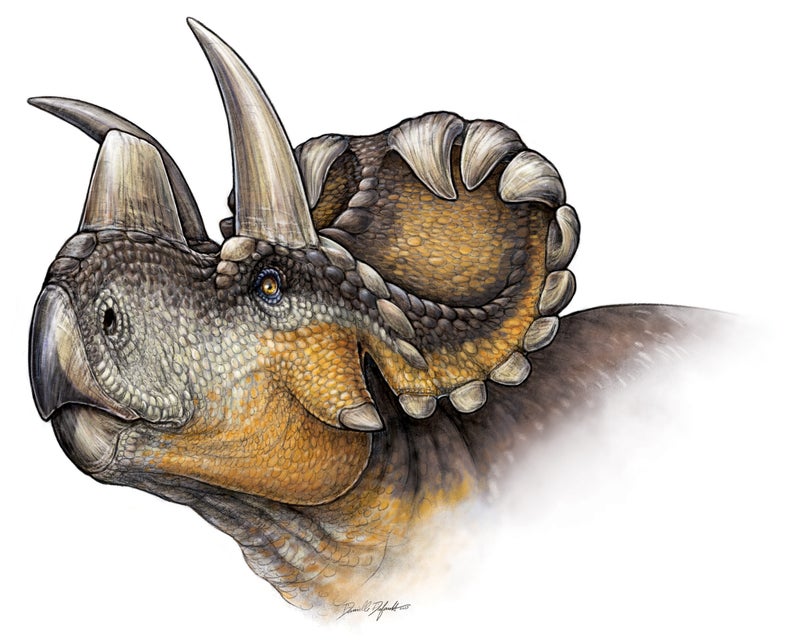 What was 20 feet long, weighed one ton and lived 79 million years ago? A more spectacular cousin of the Triceratops.

In the wake of all the coverage and memes generated by Jurassic World, it’s a great time to remember that paleontologists are still doing incredible work, looking into new dinosaurs through fossils, not genetic engineering (though some are doing that too).

Today, researchers announced that they have identified a new dinosaur in a paper published in PLOS One. The new dinosaur is named Wendiceratops pinhornens after Wendy Sloboda, a fossil hunter who has been discovering dinosaur bones and eggs in Canada since she was a teenager. Sloboda discovered the bonebed where the Wendiceratops fossils were found in 2010.

“Wendy Sloboda has a sixth sense for discovering important fossils. She is easily one of the very best dinosaur hunters in the world,” David Evans, a co-author of the study said in a statement.

As you might imagine from the name, Wendiceratops is part of the same family of dinosaurs as Triceratops.

“Wendiceratops helps us understand the early evolution of skull ornamentation in an iconic group of dinosaurs characterized by their horned faces,” Evans said. “The wide frill of Wendiceratops is ringed by numerous curled horns, the nose had a large, upright horn, and it’s likely there were horns over the eyes too. The number of gnarly frill projections and horns makes it one of the most striking horned dinosaurs ever found.”