Not your rainy afternoon trip to the science museum 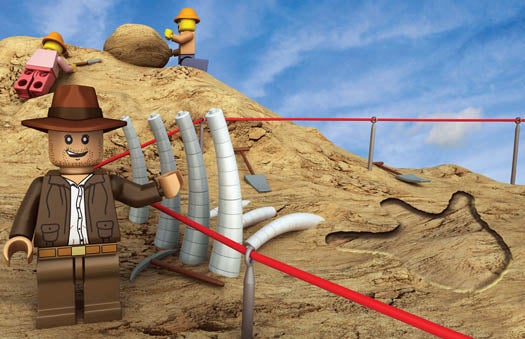 Amusement parks are so bland. This summer, take a brainier vacation— visit a particle accelerator, sail the Pacific aboard a marine research vessel, or watch simulations of epic natural disasters.

South Dakota School of Mines and Technology, Various Locations
The tectonic forces that raised the Rocky Mountains also buried and preserved many dinosaurs. This makes the American West a playground for today’s fossil-hunters. The Field Paleo program at the South Dakota School of Mines & Technology’s Museum of Geology runs several digs and welcomes visitors to participate in trips of four to 11 days. Options include hunting for Ice Age fossils in Oregon, stegosauruses in Wyoming, and marine reptiles along the Missouri River in South Dakota. Working with paleontologists, you’ll learn dinosaur classification and anatomy, and map and preserve your findings.
Trip tip: If you want to look for fossils in other areas, head to pasthorizons.com for more digs around the world.
Info: Trips run May to July; $600–$1,500; South Dakota School of Mines and Technology

Lawrence Livermore National Laboratory, Livermore, Calif.
At Lawrence Livermore’s National Atmospheric Release Advisory Center, scientists use sophisticated computer-modeling techniques to predict and plan for nuclear, chemical or biological catastrophes. Visitors will view big-screen animated simulations of worst-case scenarios, including volcanic eruptions and the meltdowns at Chernobyl and Three Mile Island. They can also take a bus tour of nearby Site 300, where LLNL researchers conduct non-nuclear explosives tests (although they won’t blow anything up for you—we asked).
Trip tip: At the National Ignition Facility, you’ll see technicians at the controls of the world’s largest and highest-energy laser and get the lowdown on the quest for hydrogen fusion.
Info: Free; ages 18 and up; for reservations, call the Public Affairs Office at 925-422-4599; Lawrence Livermore National Laboratory

Head Into the Lab

Brookhaven National Laboratory, Upton, N.Y.
Researchers from some of the dozens of labs at Brookhaven, a U.S. Department of Energy facility, will guide you through the latest developments in medical, energy, environmental and national-security research. Tours run on summer Sundays starting July 17 at the Center for Functional Nanomaterials, where scientists will demonstrate their work with electron microscopes and plasma etchers. Or check out the National Synchrotron Light Source (NSLS), used for revealing proteins and other microscopic structures, and the nearly complete NSLS-II. At 10,000 times the strength of its predecessor, the x-ray will be one of the brightest lights in the world, enabling researchers to see ever-smaller entities in great detail. In August you can enter the 2.5-mile tunnel housing the Relativistic Heavy Ion Collider to get a look at its 1,740 superconducting magnets and two condo-size collision detectors, and follow storm trackers in the National Weather Service control room.
Trip tip: Don’t miss the solar-powered bio-bus mobile lab, where you can get hands-on with sophisticated microscopes on loan from Columbia University.
Info: Free; Sundays, July 17–August 14, 10 a.m.–3 p.m. (first come, first served); Brookhaven National Laboratory 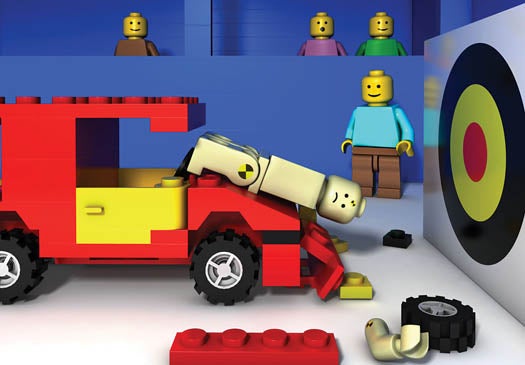 Kettering University Crash Safety Center, Flint, Mich.
At Kettering’s crash-test facility, visitors get to watch something being mercilessly smashed. Here, students and technicians test the strength and durability of automobile seats, seatbelts, airbags and other components. Using a deceleration sled that takes just 100 milliseconds to stop subjects moving at up to 40 miles an hour, researchers create 70 Gs of deceleration—100 times the jolt of braking in traffic. In addition to testing commercial autos, Kettering conducts occupant-safety tests for military transport vehicles and investigates things like how safe it is for a pop star to drive around with a baby in her lap. A workshop for kids allows them to create safety systems for eggs on a mini sled.
Trip tip: Be sure to meet Kettering’s family of crash-test dummies. Peek at the steel-and-rubber innards of dismembered dummies and, when they’re not being hurled into a wall, have your picture taken with them.
Info: E-mail Sheryl Janca or go to Kettering Crash Safety

Kansas Underground Salt Museum, Hutchinson, Kansas
A two-minute elevator ride brings visitors 650 feet belowground into the winding mines of one of the country’s largest salt deposits. At the Kansas Underground Salt Museum, 150 miles of tunnels connect 980 acres of mines, which provide 500,000 tons of road salt every year. On your way through, you’ll meander beneath 17-foot walls of sparkling crystalline salt and learn about the science and history of the mine, which opened in 1923. You’ll see how water droplets collect salt dust that builds to form hollow stalactites, or “salt straws,” which can grow to five feet before falling from the ceiling. Salt being a natural preservative, the tour includes relics such as the world’s oldest-known living organisms—250-million-year-old bacteria—and unusual items miners of yore have left behind.
Trip tip: Adjacent to the museum is a bonus feature: Underground Vaults and Storage, a two-million-square-foot archive that depends on the stable climate to protect seven million boxes filled with documents from around the globe, and the original reels of almost every movie ever made.
Info: Admission is $7.35–$18.25; reservations encouraged; Kansas Underground Salt Museum 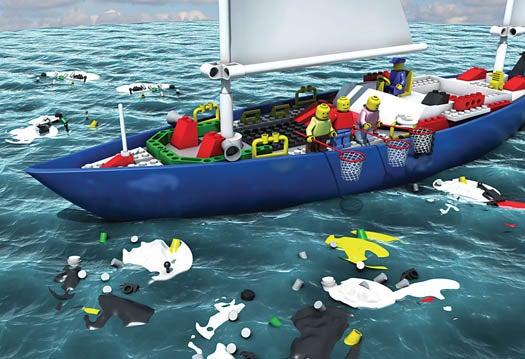 Pangaea Exploration, Various Destinations Worldwide
Explore uninhabited Pacific islands, swim with manta rays, and add to our knowledge of marine ecosystems. For intrepid civilians who want to man rigs and mine data alongside a crew of scientists, Pangaea Exploration sells passage on the Sea Dragon, a 72-foot sailboat used for international research expeditions. The organization offers as many as a dozen trips every year, most of them focused on conservation or remote island surveys. In May, for instance, the crew of the Sea Dragon will perform an environmental survey of the Northern Cook Islands, then assess ecosystem damage in the Northern Line Islands. Spots are also still available—at $10,000 a pop—for the 20-day July 7 voyage to collect and analyze the plastic debris that is polluting the North Pacific between Hawaii and Vancouver.
Trip tip: Batten down. These aren’t luxury cruises—accommodations are spare, and participants must be in good health and able to lift a third of their body weight so that they can handle such crew tasks as manning lines and pulling in the sampling trawl.
Info: Pangaea Exploration 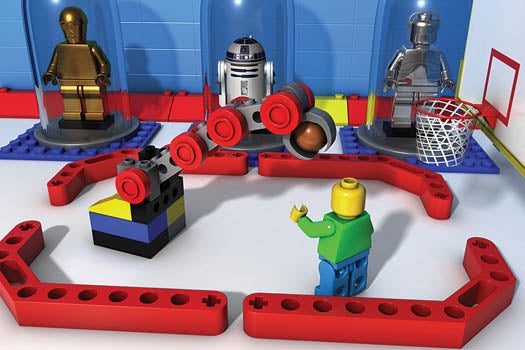 Roboworld at the Carnegie Science Center, Pittsburgh, PA.
Roboworld is filled with robots programmed to destroy you—at party games. With a paddle for a hand, Air Hockeybot 1000 uses an overhead camera to see the puck, while a 32-bit CPU factors in speed, direction, spin and friction to predict where it will go next. StarKick Foosbot operates on a foosball table rigged with infrared lights that let it track the ball. And then there’s Hoops. Originally part of an automotive assembly line, the robo-arm welder-turned-baller shoots free throws with 98 percent accuracy. Challenge him only if you don’t mind being schooled by an automaton. While you’re there, see Cye—sort of a hybrid of a Roomba and a bulldozer—work through an obstacle course, and watch AARON create original paintings.
Trip tip: Also on view are full-size models of inductees into the Robot Hall of Fame, including R2-D2 and C-3PO, several Mars Rovers and T-800, the original Terminator.
Info: Admission is $17.95 for adults and $9.95 for children; Carnegie Science Center

Learn About the Bomb

Oak Ridge National Laboratory, Oak Ridge, Tenn.
Oak Ridge, the Department of Energy’s largest laboratory facility, was built in 1943 as part of the top-secret Manhattan Project. Driving tours of the 58-square-mile compound stop at Y-12 and K-25, two of the original uranium-enrichment plants established during World War II, and the graphite reactor where Enrico Fermi accomplished the first sustained nuclear reaction. Visitors will also swing by the Spallation Neutron Source, which produces the most intense pulsed neutron beams of any facility in the world and is used to study everything from superconductivity to the structure of virus particles.
Trip Tip: The nearby American Museum of Science and Energy features a cross-sectional model of a nuclear reactor, as well as models of nuclear weapons developed at Y-12.
Info: Free tours Monday–Friday at noon, June 1–September 3; Oak Ridge National Laboratory