Strong Hands and Voice Pitch Really Are Signs of Fertility 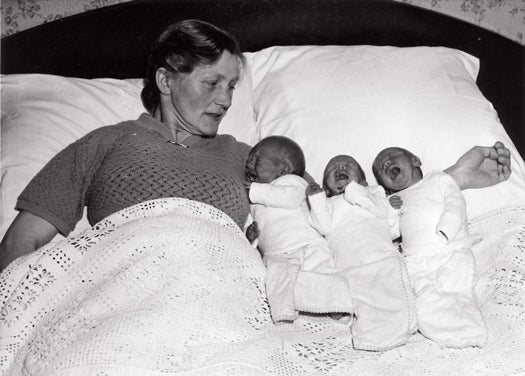 Recent research tells us that the sound of our voices betrays clues about our age, whether we’re menstruating (if we’re female), our sexual behavior and our physical strength. All of these factors, evolutionary psychologists say, are indicators of her reproductive potential. Voice pitch, in particular, has been associated with indirect measures of reproductive fitness in both men and women—men with “masculine” low-pitched voices and women with “feminine” high-pitched voices tend to be rated more attractive and have more sexual partners, for example, and they have higher levels of sex hormones (testosterone in men and estrogen in women).

But there’s been very little research so far on whether the way we speak actually relates to higher fertility, in part because most of this work is done on college students who haven’t started having children yet. In 2007, researchers finally left campus and travelled to Tanzania to study how voice pitch relates to fertility. The Harvard-lead team found that among the indigenous Hadza people, men with low-pitched voices reported having more offspring. This study was a step in the right direction, but it was limited by the fact that without a paternity test, men can’t be sure that the children they’re raising are their biological offspring. In fact, depending on where in the world you look, between 2 and 30 percent of men are—unbeknownst to them—raising children that they didn’t sire.

Outside of the rare maternity-ward mix-up, this isn’t a problem for women, so an international team of researchers decided to shore up the Hadza study findings by looking at voice pitch and female fertility rates in another indigenous African population, the Himba of northwest Namibia. This group has very little contact with western society, which means they don’t use contraception and they still live off the land (more later on why this indigenous lifestyle was particularly important in this study).

Husband-and-wife team Piotr and Agnieszka Sorokowscy, psychologists at the University of Wroclaw in Poland, recorded 54 Himba women counting from one to 10 in Herero, their native language. Each woman’s average voice pitch was measured across her vocal recording. Cross-referencing voice data with number of progeny confirmed the 2007 study linking pitch with fertility: Women with higher voices had more children and grandchildren. “The model predicts that by increasing voice pitch by 40 hertz (say from 180 to 220, a noticeable change in voice pitch for women), reproductive success goes up by 1, which is equivalent to having one child or two grandchildren,” explains co-lead author Nathan Pipitone, a psychologist at Adams State University in Colorado.

The common factor between female vocal pitch and fertility is estrogen, says Pipitone, who has previously studied voices as fertility cues. In addition to having higher-pitched voices, women with high estrogen levels have been shown to experience more regular periods, better rates of ovulation (since ovulating women don’t necessarily release an egg every month), healthier weights and body mass indexes, lower body-fat percentages and more favorable uterine and cervical environments for pregnancy. “We think that this association goes hand-in-hand: Traits that are linked to reproductive potential are also seen as attractive. High voice pitch is a consequence of higher estrogen levels—and men find this attractive,” Pipitone explains.

The male attraction to high estrogen levels is subconscious, he says—”at the level of our nervous system”—and passed down through countless generations of successful reproduction. “Throughout human evolutionary history, males who found higher-pitched voices more attractive probably left more descendants, since high-pitched women had higher levels of estrogen and had more offspring.” Over eons, subconsciously favoring high-pitched voices became the norm for men. (That preference has been scientifically documented; the affinity for the low, sultry female voice portrayed in the media is something we need to learn more about, Pipitone says.)

The team also looked at another proxy of reproductive success in the Himba, handgrip strength (HGS), which is considered a sign of phenotypic quality (i.e. health) in both modern and indigenous populations. On average, individuals with good HGS have healthier weights at birth, and they live longer and have lower risk of cognitive diseases in old age. In men, good HGS has been associated with higher testosterone levels, lean muscle mass and facial attractiveness. “If an individual’s phenotype (traits expressed in the body from genes) is robust, that person has a healthy immune system to fight infection and can do strenuous work under harsh environments, all the while producing healthy offspring,” Pipitone says.

Because HGS is associated with health, the researchers hypothesized that higher strength would predict better reproductive success. The so-called Grandmother Hypothesis, they believed, could explain the association. This idea suggests that living past their childbearing years is an adaptive trait that allows women to help provide for their grandchildren; strong grandmothers will be able to help more, and should therefore have more grandchildren.

Team member Jeremy Atkinson, a psychologist at SUNY-Albany, found that women with higher HGS had more children and “genetic vectors,” the combination of children and grandchildren. When looking at grandchildren alone, they didn’t find the association, which Pipitone believes could be explained by the smaller number of grandchildren in the sample. The findings therefore only indirectly support the so-called Grandmother Hypothesis.

Still, the finding that stronger women have more children confirms that HGS is valid proxy of reproductive success, and it refutes the common assumption that strength is more important for reproductive success in men than in women, especially in an indigenous population, in which the ability to survive depends on physical labor. Among the Himba, men herd livestock while women take care of the day-to-day business of living. “Looking at what these women do is incredible,” Pipitone says. “Walking miles for water, having to dig up tubers in harsh, dry soil, all with children strapped to them.”

“Totally ‘dainty’ females like we see today in modern society have feminine characteristics and most men find these traits attractive, but getting back to how humans have lived over evolutionary history probably tells a slightly different story,” he continues. “A combination of strength and femininity was probably more valuable among early humans.”

Jennifer Abbasi is a science and health writer and editor living in Portland, OR. Follow Jen on Twitter (@jenabbasi) and email her at popsi.thesexfiles@gmail.com.