Which Is Worse: The Study About Women Voting With Their Hormones, Or The Trolly Story About It On CNN?

"There's almost no way to stop [the study] from being spun into the 'war against women' story," coauthor Vladas Griskevicius says. Is he right, or was the study the problem? 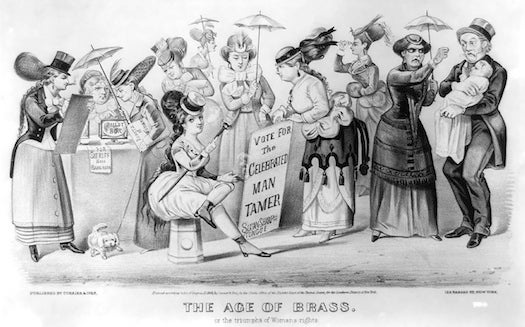 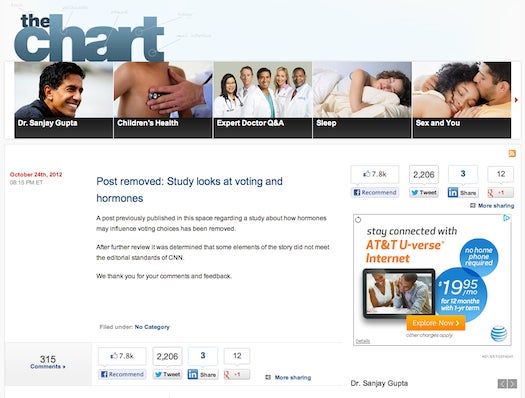 After public blowback over a CNN article about a study suggesting that women vote according to their menstrual cycle, one of the study’s authors, and the journal itself, are standing behind the research–if not the actual CNN story that prompted the backlash in the first place. (That story has since been pulled, but you can still read it here.)

The thrust of the forthcoming study is that single women who are ovulating are supposedly more likely to vote for Barack Obama, while women who are married or in committed relationships are more likely to vote for Mitt Romney. That’s by a pretty wide margin, too, the study suggests: as much as 26 percent. (The full study, “The Fluctuating Female Vote: Politcs, Religion, and the Ovulatory Cycle,” is available here under “Selected Works.”)

Such dramatic findings have raised questions about the validity of the study; some even wonder whether it should’ve been conducted at all. But perhaps the most controversial aspect are the conclusions the authors drew: “We believe that the key difference between these two groups is that the married/engaged women have more invested in their relationship, and therefore have considerably more to lose if their current relationship were endangered,” they wrote. As the lead author, Kristina Durante, was quoted as saying in the CNN article: married/ engaged women are “overcompensating” for those feelings, then going ever-more-certainly for the safe, conservative candidate that represents traditional values. In short: Not only is ovulation causing changes in voting, but it’s because of women’s husbands. Double whammy controversy. It’s the same for single women voting liberal: They’re more open during their ovulation cycle, the authors argue, and not concerned about spousal feelings.

Durante, a University of Texas at San Antonio professor, didn’t respond to request for comment, but one of the co-authors of the study did: Vladas Griskevicius, a professor of marketing and psychology at the University of Minnesota. He stands by the study, but doesn’t feel the same about the CNN article.

CNN gives the most real estate to talking about the study, but is careful to distance itself (multiple times) from the study’s conclusions. You might not have gotten that it if you didn’t read past the headline: “Do hormones drive women’s votes?” After that, it’s mostly detailing the study and quoting multiple researchers who carefully plugged holes into the conclusions. The main conclusion to the answer in the headline seems to be: “Probably not, but one study says yes.” The CNN author, Elizabeth Landau, later tweeted about the outcry.

“It was taken into a media spin of the study,” Griskevicius says. In the context of the article, he says, it looked like the study suggested, “whereas women vote with their hormones, men will vote with their brains.” And that certainly was one of the concerns raised: Paul Kellstedt, associate professor of political science at Texas A&M University, was quoted in the CNN article as saying, “The reader [of the study] may be left with the impression that women are unstable and moody in ways that extend to their political preferences, but that men are comparative Rocks of Gibraltar.”

Griskevicius says there’s plenty of literature to suggest men make behavioral decisions based on changes in hormones–testosterone, specifically–but that it wasn’t what the study was about, and so it wasn’t included. What it was about, he says, was answering a question: Do ovulation cycles have an effect on how women vote? The researchers found that the response was yes, he says, and so they can’t be (or shouldn’t be) held liable for the public outrage that results. It’s “being published in a top peer-reviewed scientific journal,” he says, and went through the normal vetting process for studies like it, so why the anger? “There’s almost no way to stop it from being spun into the ‘war against women’ story,” he says.

They could’ve, of course, included that existing body of research. As for skepticism about how much the cycle could actually influence voting, Griskevicius insists the study–which will be published in the next six to eight months–is sound. The researchers were surprised by the numbers the first time, too, then ran a second study to test them out and got the same results. Which doesn’t really prove anything: That might make the findings less of an anomaly, but it wouldn’t correct for potential problems with the study’s methodology. Susan Carroll, a professor of political science and women’s and gender studies at Rutgers University, is quoted in the CNN article–with some of the most vocal concerns about the study–and expanded in an email about the study’s use of MTurk.

I would also point out that the study apparently analyzes survey data, not data from a lab or field experiment. Since the authors used MTurk, their samples certainly are not random and there is no guarantee that they are at all representative. Although the research is not based on experimental design, the authors apply statistical techniques (ANOVA) generally used for experimental research to the survey data, making the fact that these are survey data less obvious. The use of survey data makes all the more problematic the authors’ failure to apply statistical controls for demographic variables, such as age or income, which may well account for the observed differences between women who are single and in committed relationships, since these variables are not controlled for through experimental design.

It has come to our attention that CNN has reported on a forthcoming paper in Psychological Science, which argues that women’s ovulatory cycles may influence their political decision making. Specifically, the paper offers evidence that ovulating single women tend to report attitudes that are more liberal and more pro-Obama, while ovulating women in committed relationships tend to report attitudes that are more conservative and more pro-Romney. While we recognize that studies of gender and behavior are often controversial, we stand behind the integrity of this study and the journal. The research went through the regular peer-review process before it was accepted for publication. The article is currently in production and will be published in its final form at some time in the near future. We direct further media inquiries to the lead author of the paper, Kristina Durante of the University of Texas, San Antonio, whose comments about the research are hers alone.

“Whose comments about the research are hers alone”? Uh-oh. That doesn’t sound particularly good for Durante, even if the journal does stand behind the facts in the study.

A word on peer review: It’s the best process we have for making sure only the most scientifically valid studies make it into publication, but they’re emphatically not a full endorsement from the scientific community. There are plenty of other studies that make it through review–into other top journals, too–and still end up getting plenty of flak after publication (or, in this case, before it). In that sense, CNN probably doesn’t deserve the heat it’s getting, or the journal at least deserves to be getting more.

CNN, for the record, didn’t respond to requests for comment about why, exactly, the article got pulled. All we know on that end is what’s pasted where the story used to be:

A post previously published in this space regarding a study about how hormones may influence voting choices has been removed.

After further review it was determined that some elements of the story did not meet the editorial standards of CNN.

We thank you for your comments and feedback.