An electronic dog nose that locates the bloodsucking pests in minutes 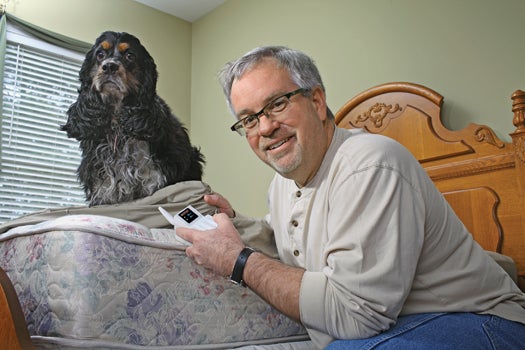 Chris Goggin doesn’t like the title “inventor,” despite the fact that nearly two dozen patents list him as one. He prefers “innovator.” Either way, the Wilmington, North Carolina, mechanical engineer and former product developer — his résumé includes military missile electronics, the George Foreman Spin Fryer, and fuel-tank mechanisms for the F-22 Raptor jet recognizes the need for a new device when he sees one. Two years ago, as more and more people began waking up with itchy, red welts on their body, he realized the world needed a cheap and effective way to detect bedbugs.

The notorious insects, which reemerged in the U.S. about 10 years ago after a 50-year hiatus are extremely difficult to find. They can hide in the folds or cracks of nearly any object. Unlike cockroaches and mice, bedbugs don’t respond to poison-laced baits or bombs. Exterminators must deliver poisons more directly, so pinpointing the insects’ exact location is vital in stamping out an infestation. During a typical inspection, an exterminator may spend up to an hour per room seeking bedbugs out. Goggin’s Bed Bug Detective does the same job in 15 minutes.

The device replicates the way dogs pick up scents, enabling it to sniff out bedbug pheromones, chemicals that insects use to communicate with one another. Dogs’ olfactory system allows them to recognize even the faintest of scents. In recent years, well-trained bedbug-detecting pups have proven their ability to recognize bedbug pheromones with 98 percent accuracy in a controlled study. Goggin’s cocker spaniel, Nina, acted as a model by lending the device her unique “sniff cadence,” the rhythm dogs use to breathe in an odor. The snuffling pulls a scent into the smaller of a dog’s two olfactory chambers; over time, faint aromas build up in the chamber and become recognizable to the animal. 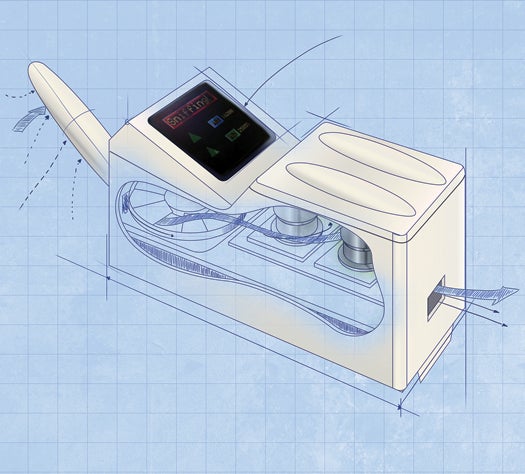 How It Works: Bed Bug Detector

A fan sucks air in through seven small holes in the wand. The air comes into contact with three sensors capable of detecting a bed bug’s unique aromatic signature, a combination of pheromones, CO2 and methane. Software monitors and adjusts the system, and a color display shows when the user is getting closer or farther from the source.

Exterminators in the U.S. currently employ around 200 dogs, a number that’s on the rise. But the training and care for a dog can run a pest-control company between $30,000 and $70,000, according to the National Pest Management Association, a cost that’s generally passed on to the customer. Since training isn’t regulated, some dogs do not learn to find bedbugs adequately. Those that do can locate an infestation to only within a few feet, which still leaves a lot of space that must be searched by hand. Dogs also don’t distinguish between male and female pheromones (egg-laying females pose the highest infestation risk) or sense other signatures such as the insects’ odorless carbon dioxide and methane emissions.

Goggin’s electronic version uses CO2 and methane sensors, as well as a proprietary pheromone detector, to pinpoint bedbugs to within one square inch, from a distance three times as far away as a dog could. The device can also tell the bugs’ sex. The handheld unit will go on sale this year for $200. Goggin says a new model that works for a wider variety of pests, including cockroaches, ants and mice, is on the way.

UPDATE, September 2012: The detector, called The Bed Bug Detective when this article was first published but more recently sold under the trade name The Electronic Dog Nose, claimed to detect bed bugs through a proprietary set of sensors. These sensors, said Goggin, were chemically sensitive to the bugs’ pheromones and expired CO2/methane. The device is intended to mimic the noses of specially trained bed-bug-sniffing dogs (although it isn’t entirely clear what exactly the dogs smell when they identify bed bugs).

Since the article published, several bed bug experts, including entomologists and pest control operators, have come forward with concerns about Goggin’s claims. One has run tests on the product with negative results. Others remain highly skeptical. Consumers have also written the magazine with complaints on the product, mostly noting unfulfilled orders and slow responses from the company.

Because of these reports, Popular Science requested a unit last March for independent testing. We are still waiting on it, although Goggin says it will arrive within the next 10 days. Until we have the unit in hand and have had an independent researcher test it, we can’t verify the inventor’s claims. Readers should not take our article as an endorsement of The Electronic Dog Nose or any other bed bug sensing device sold by Mr. Goggin.

If and when Popular Science receives a unit and has it tested, we will publish a follow-up.