2011 Invention Awards: A Pen To Screen for Disease 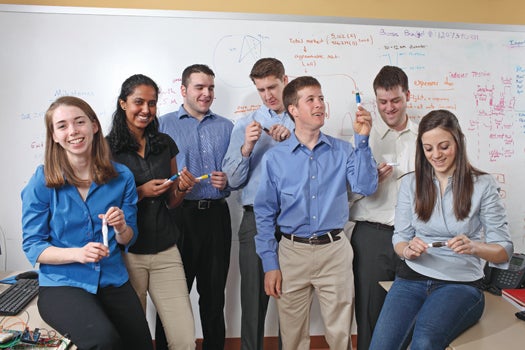 A $1 marker pen designed by Johns Hopkins students is filled with enough reagent to administer up to 400 prenatal disease tests. John B. Carnett
SHARE

On a February night last year, Sean Monagle got the phone call he’d been waiting two months for: Some 100 urine samples from pregnant women were ready for his analysis. A technician delivered them to his dorm, and Monagle, then a senior at Johns Hopkins University, raced off to his lab. He knew this was his chance to test his potentially lifesaving invention.

Every year, a combined 6.3 million pregnant women and newborns die from pregnancy and childbirth complications. Ninety-nine percent of maternal deaths occur in developing countries where most women receive little, if any, prenatal care. So Monagle, now a graduate student at the university’s Center for Bioengineering Innovation and Design—along with his engineering classmates Maxim Budyansky, Sherri Hall, Matthew Means, Shishira Nagesh Mary O’Grady, Peter Truskey and James Waring—designed a pen that can identify prenatal diseases early, accurately and far more costeffectively than other methods.

In the U.S., the most common way for doctors to screen expectant mothers for preeclampsia and related complications is with a 50-cent dipstick. But in developing countries, dipsticks are too expensive for widespread use. With their marker, Monagle and his colleagues created a prenatal test that’s simple enough to be used and interpreted by anyone and costs only a third of a cent per use. 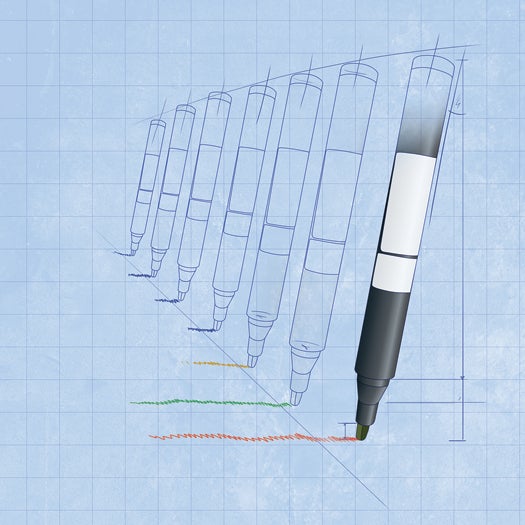 How It Works: Safety Pen

To administer a test, the user draws a line and squeezes a drop of urine on it. Each marker will be color-coded for a different disease.

That night in his lab, Monagle was testing for preeclampsia and related disorders. The condition causes 76,000 maternal and 500,000 infant deaths every year, yet it’s easily treatable if detected early. He drew a yellow line on a piece of filter paper with the pen and squeezed a drop of urine from one of the vials onto the paper. The test strip turned cobalt blue. Chemical reagents he had mixed in the marker’s “ink” (a liquid solution containing a buffer that the students formulated) had reacted with high levels of protein in the urine, a sure sign of preeclampsia.

The students, also including Britni Crocker, Elaine Yang, Ezra Taylor, and Thembi Mdluli, are planning to make color-coded kits to screen for several conditions, including diabetes and urinary tract infections. “We can make a significant difference if we don’t wait for women to come to healthcare facilities but rather take some of this lifesaving care to them,” says Harshad Sanghvi, the medical director of Jhpiego, the nonprofit organization that challenged Monagle’s class to develop a low-cost prenatal testing tool.

Jhpiego, funded by a $100,000 award from the U.S. Agency for International Development, recently began a study of the marker-based preeclampsia test in Nepal. The results could have wide-reaching benefits, says the agency’s chief innovation officer, Maura O’Neill. “If we are going to make dramatic improvements in health-care delivery, not only in the developing world but in the developed world,” she says, “this is the kind of breakthrough that we’re going to need.”