Gray Matter: Calcium Carbide Reactions Can Light Up a Room—or Fill it With Noise 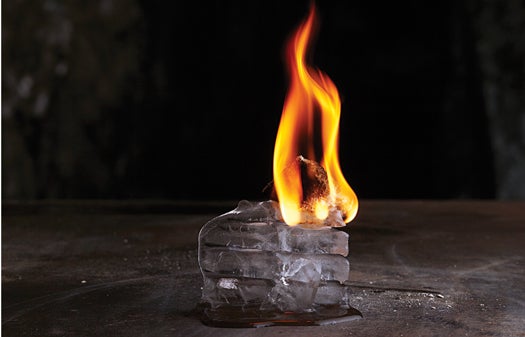 Pushing back the night with light of our own making was the first and greatest of humankind’s achievements. What a thrill it must have been to discover that the setting sun no longer had to mean darkness and fear. We’ve come a long way since that first campfire, but it’s just recently that technology has topped the most advanced form of open-flame light. 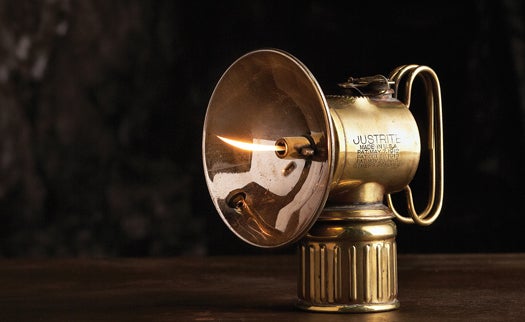 More like a blowtorch than a candle, the flame from a carbide miner’s lamp is almost impossible to blow out.

As a portable light source, only the LED flashlight is superior to the carbide miner’s lamp, which had been the standard for brightness, weight and reliability since the early 1900s. Carbide lamps have an upper chamber full of water and a lower chamber full of rocklike calcium carbide (CaC2). A valve lets the water drip onto the CaC2 at a steady rate. When water hits carbide, it produces acetylene gas, which is directed to a nozzle in a parabolic reflector and then lit manually. Burning acetylene is extremely bright, and a cave explorer can keep a light going for days with just some water and a bag of what look like ordinary stones. 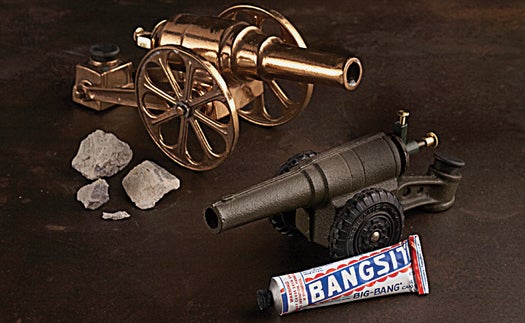 Mixing acetylene with air also creates very loud bangs. This is what made a certain toy cannon so attractive when I was a kid. Powered by “Bangsite” (the toy maker’s name for powdered calcium carbide), the cannons had a breech-load mechanism that dumped the compound into a water reservoir as it was locked in place. A firing plunger lit the gas with a flint.

I never did get one as a kid, and when I showed my dad the one I got for this column, he said that he’d always wanted one too! So kids, take heed: When pestering your parents for loud, dangerous toys, sell it as a chance to finally realize their childhood desires.

Faulty seals on old carbide lamps or Big Bang toy cannons bought online can allow acetylene to escape from the chamber, resulting in fire where it does not belong. Also, cannons can cause hearing loss if misused.