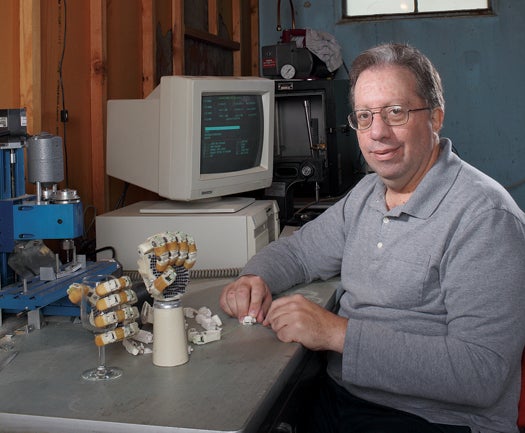 Prosthetic hands typically come in three varieties: purely cosmetic models; hooks and other low-cost mechanical appendages that provide a limited range of motion; and electronic versions that better mimic natural hand movements yet can cost tens of thousands of dollars. Mark Stark’s prosthetic incorporates the best elements of each. Although its minimalist plastic assembly is nearly as light and inexpensive as a common steel hook, it looks and moves like a high-end electronic hand.

Stark, who makes his living designing valves for dryers and other appliances, got into prosthetics in part to help his friend, Dave Vogt, who was born without a left hand. Stark’s creation is electronics-free, but its fingers each have three knuckles (two on the thumb) that bend separately to conform to anything the wearer grasps, including irregularly shaped objects that a hook can’t hold.

Hooks attach to a socket at the end of an amputee’s arm and are operated by a cable that runs up to a shoulder harness. When the wearer shrugs his shoulders, the cable pulls the hook open; when he relaxes, the cable slackens and the hook closes. The Stark Hand screws into the same socket-and-cable system but adds a lever on the palm that connects to five more cables, each running up the back of a finger. A shoulder movement triggers the lever to tug all five fingers open at once, and the individual cables let each finger rebound on its own. Springs in each joint contract until each finger comes to rest on an object, so some fingertips can curl around, say, a wineglass stem while others grasp the cup. The springs exert a level of pressure gentle enough to hold an egg but strong enough that you can lift a chair. 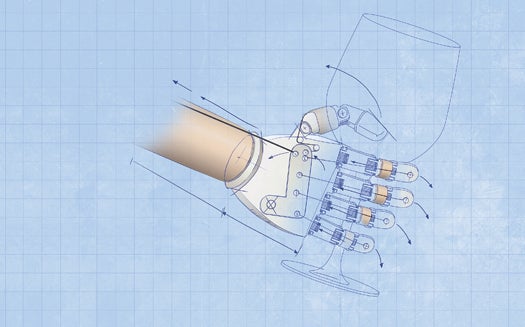 How It Works: The Stark Hand

The prosthetic hand attaches to a cable that runs from a shoulder harness worn by an amputee. A lever on the palm opens all five fingers at once, and separate cables in each finger and springs at each knuckle allow the fingers to close individually and bend around objects with a secure grip.

In 2004, Stark constructed a proof-of-concept from hardware-store supplies and gave it to Vogt to try out. Within an hour, Vogt caught a ball left-handed for the first time in his life. Since then, he has helped Stark test and improve four more prototypes. Stark designed stronger, compact springs, re-engineered the fingers into a few easy-to-manufacture shapes, and set the thumb at a new angle to better replicate a real thumb. He also strengthened the joints in the hand against side impacts after Vogt broke a prosthetic knuckle when he hit something while swinging around on the dance floor.

Vogt now wears the hand everywhere except to his job as a machinist, where he has to do heavy lifting for which a hook still works better. A more durable production version, which will use tougher plastics and sleeker parts, could be on the way as early as this winter. Edison Nation, a company that helps inventors develop their ideas, recently selected Stark’s hand for commercial development and is now in talks to license it to a major prosthetics manufacturer.