In part two of our three-part Hackintosh guide, we'll walk you through the most complex step: selecting all the individual components for your homebuilt OS X PC 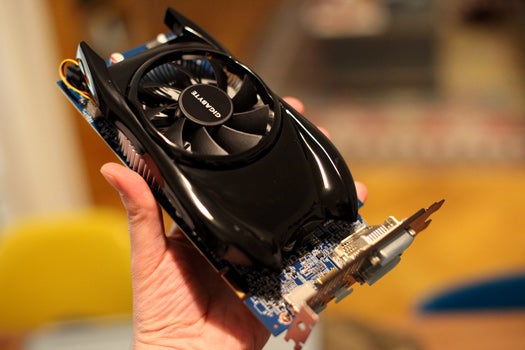 OK, so you’ve decided to build a Hackintosh PC from scratch. Here in part two of our three-part Hackintosh guide, we’ll ease the confusion of what could be the most time-consuming and arduous part of the entire process: browsing hardware catalog sites for hours trying to choose the components that will become your new machine.

Choosing hardware for your Hackintosh is confusing because for each primary component–your motherboard, CPU, graphics card, memory modules, optical drive, and anything else you choose to install–there are literally thousands of choices. So let’s narrow that down, shall we? The mission here is to choose components that OS X will recognize and accept with little or no custom configuration.

The most important two components by far–95 percent of the compatibility battle according to Tonymac, the author of the Hackintosh-enabling software we’re using for this guide–are the motherboard and graphics card. The motherboard is important because it presents yet another subset of even more choices. Motherboard manufacturers choose from several different CPU sockets, network controllers, audio chipsets, USB interfaces and more for each model motherboard they produce, each with its own degree of OS X compatibility. And graphics cards can also be powered by a dizzying variety of chipsets from both Nvidia and ATI/AMD, each requiring specialized drivers to tap into their full capabilities.

Thankfully, the community that has formed around MultiBeast has done almost all of the work for you by documenting specific hardware setups that have been proven to work well. On the forums, and on tonymacx86.com, there are many complete system configurations with confirmed support, spanning the full range of power levels for every budget. Now, you just need to choose which system model to follow! Which can be harder than it sounds. 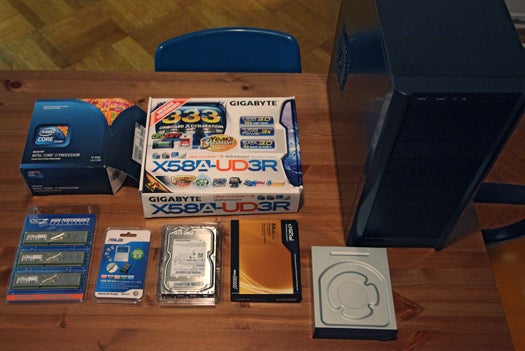 Hardware on the Table

Not pictured; my graphics card. Otherwise, this is all you need to build a Hackintosh

For my build, I followed this guide originally produced by MacMan, Tonymac’s co-developer who now maintains MultiBeast (MultiBeast, if you recall from part one, is the software tool that makes this all possible). I adhered to my general computer-buying dictum and went for as much power as I could afford at the time, so I opted for one of Intel’s most powerful non-server processors in the 3.06 GHz Core i7 950. Add to that 6GB of RAM, a solid-state startup drive, and a powerful graphics card, and we’re talking about a pretty powerful machine. The complete system, including a new 23″ LCD monitor, rang up to a grand total of $1,295.86 on Newegg.com in December 2010 (not including rebates). Compare that to a $2,499 price tag on a similarly equipped Mac Pro (without monitor and SSD). Not bad at all.

For a closer look and specific notes on each component I used, check out the gallery below:

If you’re looking for a less powerful, cheaper machine, or something that fits in a smaller enclosure, there are numerous such guides in Tonymac’s forums and on his site. For fear of this guide’s scope spiraling out of control, I’m going to stick mostly to this set of hardware. But before we get specific, we’ll cover some of the general concepts surrounding what types of hardware are best suited for Hackintoshing. So if you need to deviate from my system here, you’ll be prepared.

A simple rule to follow in choosing hardware is that if the component has been used by Apple in an iMac or Mac Pro, chances are it will do well in your Hackintosh system. For instance, the current line of Mac Pros use an ATI Radeon HD 5770 graphics card, so I went with a card that uses the same Radeon 5770 chipset. If it’s in one of Apple’s machines, there’s a good, reliable device driver for it somewhere–most likely built into OS X itself. So that’s good.

An important part of the Hackintosh configuration process (which we’ll cover in the third and final installment tomorrow) is employing a file called a Differentiated System Description Table (DSDT). A DSDT is essentially a roadmap of your motherboard that OS X reads to know what hardware you have inside your machine, and how to use it. Each motherboard has a unique file, which also depends on the revision of the board you have and the firmware or BIOS version you have installed. Yikes! Luckily, it’s easy to check which version of the motherboard you have, which is as much figuring out as you need to do. Tonymac’s DSDT database has pre-configured files to download.

The Tonymac folks tend to lean toward Gigabyte brand motherboards, and the DSDT files for most of the popular Gigabyte boards have been tested and confirmed in the database. So unless you’re prepared for some complications, stick with Gigabyte for your motherboard.

One confusing part about choosing a graphics card is that there isn’t just “one” Radeon HD 5770 card made by ATI to buy. ATI makes the chipset, which is then used by a huge number of manufacturers (like Gigabyte, Asus, etc) on cards of their own design. So once you’ve picked a chipset, you still have to figure out which card to buy.

The trick is staying close to ATI’s or Nvidia’s “reference design”–more on which can be read here. But if you stick to the Gigabyte Radeon HD 5770 card I used (the one that looks like a Batmobile!) you should be fine.

You want one! See the component list for more on that. 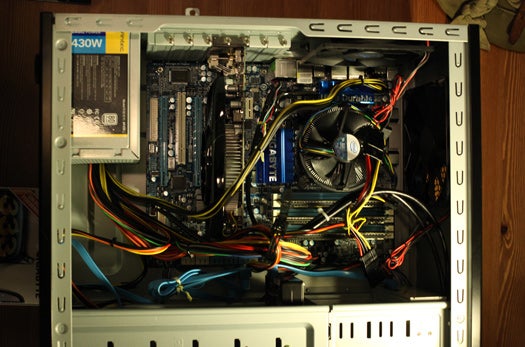 A look inside once all components have been installed.

Thankfully, building your Hackintosh is just like building any other Windows PC–you don’t have to do anything special. If you’ve never done it before, you’re going to have a fun time, I can pretty much guarantee. You’ll be best served by reading the manual for each component to make sure everything is installed according to plan, but in general, every component of your machine needs a power connection and a data connection. And there may be a few screws to anchor it in place. That’s it–truly nothing to be intimidated by.

Power connection wires emerge from the power supply inside the case, and generally speaking, if the connector fits in the plug on the back of your component, it’s the correct one. Hard drives and disc drives almost all use a SATA power connector, which looks like this. If, like me, you want to install a few extra hard drives, you might need some Molex to SATA power adapters to mate your power supply’s old Molex leads to a SATA drive. Beyond that, your graphics card will have a dedicated power lead from the power supply, as will the motherboard. The instructions should indicate which is which clearly.

For data connections, you’ll use SATA data cables (these come packaged with your motherboard) for disks and drives, and your graphics card, memory modules, etc. will pop into the motherboard’s dedicated slots.

Be prepared to troubleshoot. When I first turned my machine on, I didn’t get any video. After restarting with each of my three RAM modules installed individually to check for bad RAM (a frequent issue), I realized that I had neglected to connect my video card’s power cable to the board. Whoops! Luckily, this was easily fixed. If you run into problems, try to isolate each potentially problematic component until you find the culprit.

If this is your first time building a PC, I wholeheartedly recommend Lifehacker’s excellent guide for beginning PC builders for more guidance.

And that should about cover the hardware end of it. For a closer look at the components I used for my system, see the gallery here. And stay tuned for Part 3 tomorrow, where we install and configure OS X (yesterday’s part one can be found here). Happy hackintoshing! 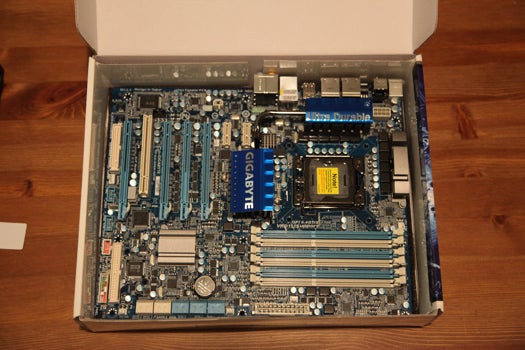 This is one of the more widely used motherboards for Hackintoshing. It uses Intel’s LGA 1366 socket, which means it will only accept Core i7 processors, which tend to be faster and consume more power. It has USB 3.0 and a fast 6gbps SATA bus. But perhaps most importantly, its onboard audio and LAN chipsets made by Realtek have excellent driver support. 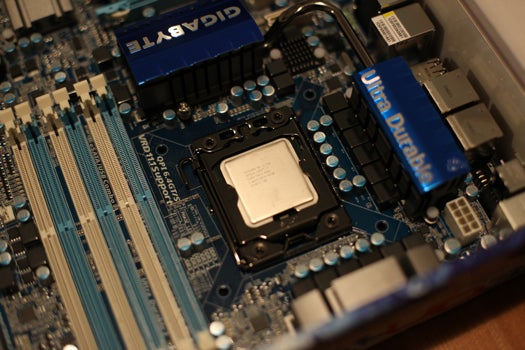 This is one of the fastest Core i7 processors Intel makes for under $300. Which processor you buy is mostly a budgetary consideration, so long as you don’t venture into the newer Sandy Bridge CPUs just yet. Apple’s own desktop machines are only just now getting Sandy Bridge processors, so the Hackintosh community will need time to add support for the latest and greatest. Another note regarding CPUs: You’ll hear a lot of gripes about the heatsink fan Intel ships with their processors, but I’ve used the stock fan in my system to no adverse effects. If you plan on pushing your machine hard, though, you may want to get an aftermarket CPU cooler like the Scythe Mugen. 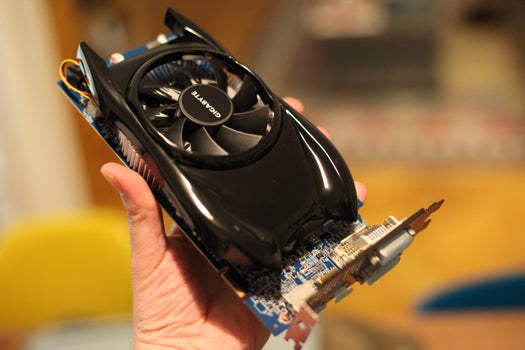 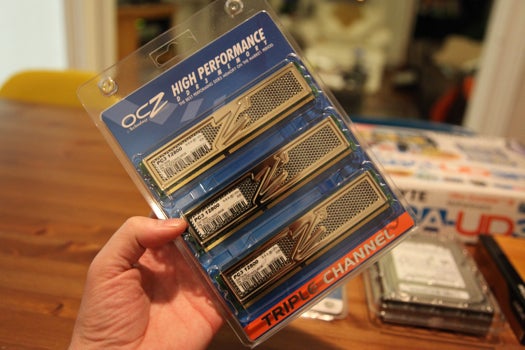 The RAM I used has since been discontinued, but RAM is fairly generic in terms of Hackintosh compatibility, so long as it works with your motherboard. I’d stick to the speed and voltage specs of these sticks, though. Others have had success with this still-available set from Corsair. 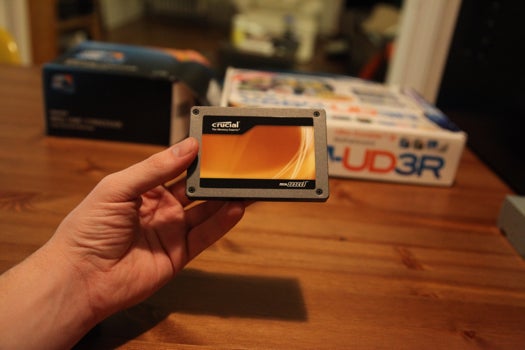 I can’t recommend highly enough getting a solid-state drive to serve as your main system and applications disk. The speed gains are incredible, and you don’t need much storage space if you elect to store all of your user data on a more spacious conventional drive. I have what I imagine is a fairly standard number of applications on my machine, and I’ve only filled about half of the 64GB. Lots of modern cases have built-in mounting points for smaller SSDs, but if not, you may need cheapo brackets to install the SSD into one of your case’s 3.5-inch drive bays. 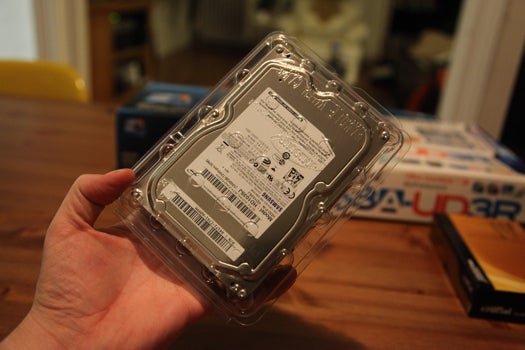 There are no compatibility issues with hard disks, so buy whichever drive you want. You can also install as many as you want–I have another 500GB drive for Windows. 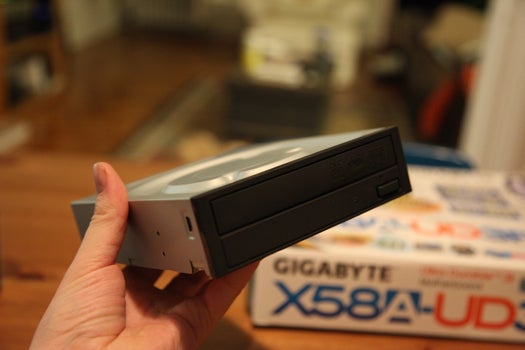 This is the only DVD drive you’ll see in most Hackintosh builds. There may be issues with others, but there’s no reason not to go with this Sony, which is 20 bucks and available everywhere. 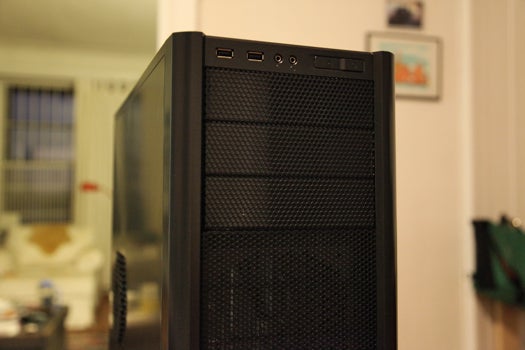 Much of the homebuilt PC industry is geared toward your more hardcore gamer types, who tend to favor some fairly elaborate case designs. So if your tastes lean more toward something simple and clean, your options are somewhat limited. I like the Antec 300 though–it’s priced right, and doesn’t have tons of blinking lights or elaborate air ducts. A note on power supplies: Most Hackintosh builds you see documented will include a much more powerful power supply (sometimes as high as 800-1000 watts). My Antec 430W supply, though, has proven more than adequate for driving an SSD, two hard drives, an optical drive, my Radeon 5770 and a power-hungry 130W Core i7 processor. But if you’re planning on an elaborate dual-graphics-card or overclocked setup, or think you’ll require some additional fans and cooling systems, you may want more power.
Apple
apples
feature
hacking
Hackintosh