How to get rid of fleas

Protect your pets and your pelt. 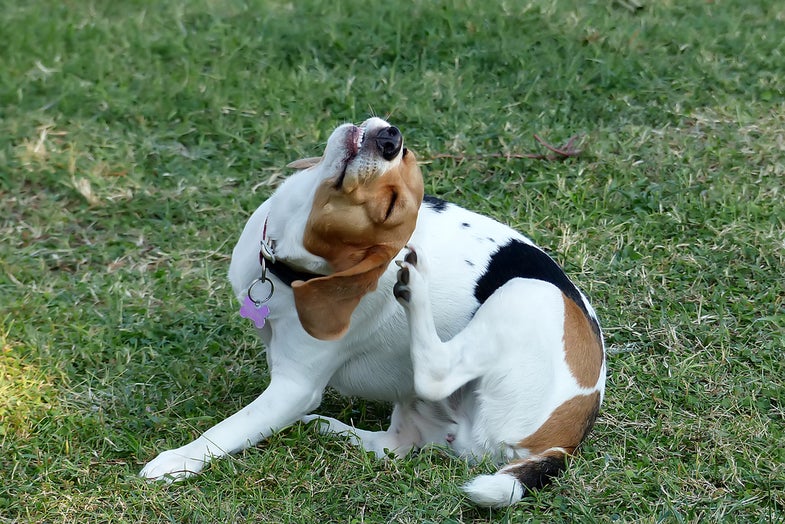 When the leaves start to turn, fleas suddenly seem to show up everywhere. If they establish a beachhead inside your home, you’ll have much more trouble getting rid of them. Here’s how to keep the biting bugs off your turf.

Why do fleas appear in the fall?

Fleas go through four life stages. First, there’s the egg—one female can lay a hundred to several thousand over the course of her life. These 0.02-inch-long ovals can stay alive for up to a year, but they really thrive in the hot summer months. So as we get into the dog days of August, the ova start to hatch into larvae.

These baby fleas have an appetite, and they can eat any organic material, including their fellow eggs (if they don’t hatch fast enough). The larvae prefer dark and humid spaces, so they’ll hole up under your bedding and carpets, munching away. As they’re only 0.06 to 0.16 inches long, they’re also hard to spot unless you have a flashlight.

Once the larvae eat enough, they wrap themselves in cocoons and become pupae, which are almost as tough as flea eggs. They usually remain in this stage for about seven to ten days if they know prey is close, but they can remain wrapped up for weeks if need be. They won’t hatch until they sense a trigger that indicates animals are nearby. These cues can include elevated carbon dioxide levels, increased heat, or even vibration. Once the wrapped-up bug detects a nearby trigger, it will emerge as an adult.

Now, during the cooling fall season, you find an infestation on your hands. To get rid of it, you’ll need to clean not just your house, but your yard and family as well. 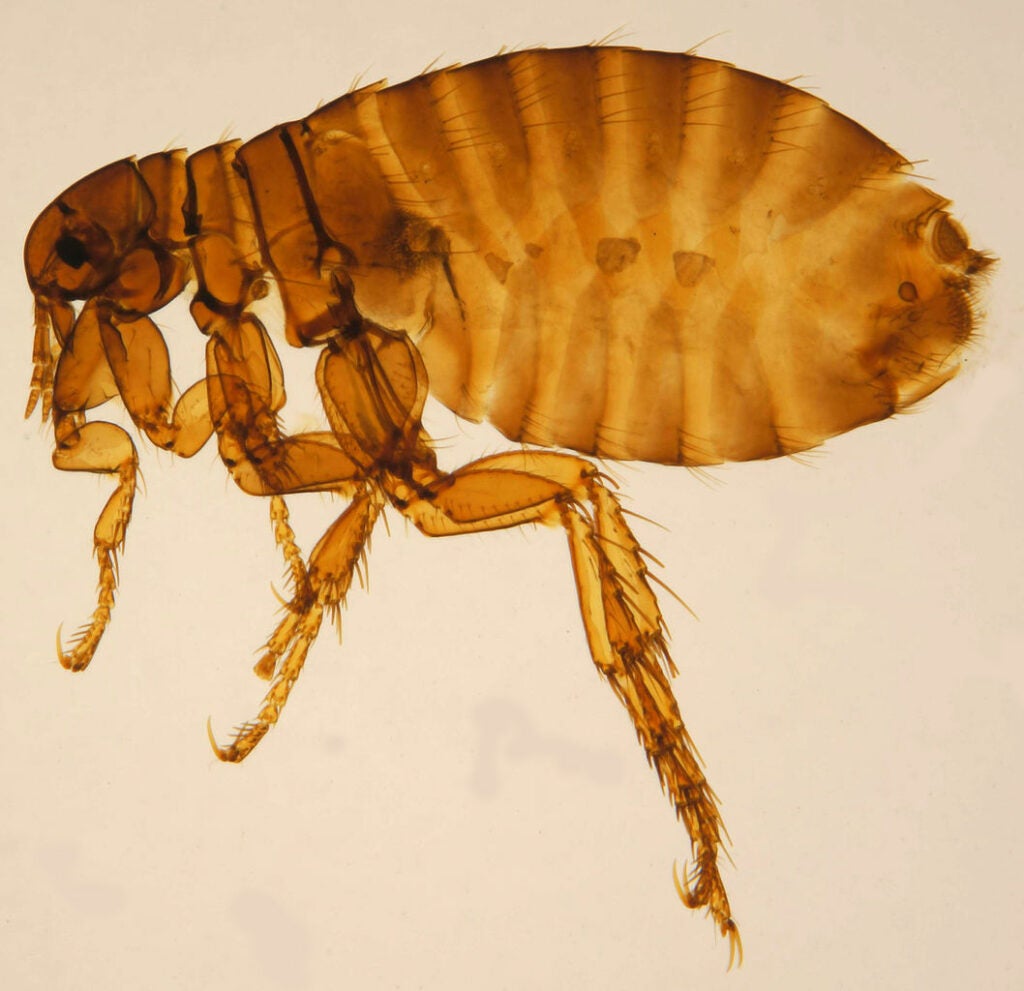 This adult female Pulex irritans, better known as a house or human flea, grows to lengths of about 0.06 to 0.16 inches.

Find out how they got in

As with any pest infestation, you start by finding the vector that brought in the bugs.

“Most often, fleas come in on animals,” says Todd McNamara, operations manager for Green Planet Pest Control. However, don’t jump right to blaming Fido or Sylvester. If you or a family member handed a flea-infested animal, you might have brought the bugs in yourself. An infestation can also occur when a wild animal, such as a raccoon, takes up residence somewhere in your home or on your property.

Once you’ve figured out where the fleas came from, you can remove the source.

Just tackling the animal or person that carried the pests won’t be enough. Flea eggs can easily fall off the host onto the ground, which means you’ll need to treat any spot the vector walked through, lay down, sat on, or otherwise touched.

Wash bedding, including pet beds, and clothing in hot water with a strong detergent. Once that’s done, you can focus on the rest of your home.

For many, the first defense against fleas in the house is a flea bomb. Also called foggers, these devices cover every surface with a coating of pesticide. This creates a few problems, such as forcing your family to leave the house for the duration of the treatment. Foggers also only cover surfaces, and they have trouble reaching those dark, damp places where flea larvae like to hang out. As a result, you may have to set off multiple flea bombs. As a final blow against foggers, the pesticide they deposit will disappear once you vacuum or dust, destroying that temporary protection.

So we don’t recommend that you rely on a flea bomb. Instead, clean your house thoroughly with a vacuum and a steam cleaner.

Your vacuum cleaner is, by far, your most effective weapon against this type of pest. A 2007 study conducted by Ohio State University found that the combination of mechanical abuse and lack of oxygen killed fleas at all four stages of their life cycle. In fact, this is so effective that you should vacuum even if you’re also taking other steps.

“The thing that often gets most overlooked is the vacuuming,” says McNamara. “Even while having your home professionally treated, it’s important to vacuum before the service—to stimulate the fleas and get them up and moving so that they come in contact with the products being sprayed—and after the service as well.”

Before you vacuum, you should prep your machine. Switch it to its most powerful setting and put the brush at maximum so it can clean out crevices. Drop a flea collar or a similar control device into the canister or bag to kill any pests that survive their trip into your vacuum’s innards.

In addition to your floors, remember to treat your movable furnishings. Remove any rugs and curtains that you can and give them a thorough shampooing or vacuuming. You should do the same for upholstered furniture. Steam cleaners can kill any larvae or pupae that the vacuum didn’t catch. You should focus in particular on any places your pet or family member has been—that’s where you’ll find the highest concentration of fleas.

Finally, before you put back your rugs and other coverings, apply an anti-flea spray such as methoprene or pyriproxifen. Methoprene breaks down more quickly in sunlight, so reserve it for dark places. If you prefer not to set down pesticides, you can shake some salt into furniture crevices and under rugs: It dehydrates insect larvae.

If fleas have infested your yard, then you’ll quickly track them back into your nice clean home. As your next step, you have to get the pests off of your lawn. While you work, wear long pants, long sleeves, and gloves to keep the biters from attacking you or hitching a ride back into your house.

Fleas spread in a yard much the same way they do indoors, so you can impede them by keeping your grass short and your trees trimmed. Clear away any debris, such as piles of leaves, that might offer a dark and humid hidey-hole. If you have a compost heap, you might want to leave that in place, but at least fence it off to keep your pets away. Bag up or burn clippings and trimmings as quickly as you can.

Next, look for shady or warm spots where your pets like to hang out. If possible, fence off these areas and then treat them with flea sprays or diatomaceous earth (DE). DE works by dehydrating insects, so you should only use it in areas that won’t see a lot of rain or moisture—once it absorbs water, it loses its effectiveness.

As you explore outdoors solutions to your infestation, you may see that some people recommend more natural products like cedar chips or nematodes. While there is some evidence that fleas avoid any essential oil, including cedar, the dosage is a problem: To really stop fleas with cedar chips, you’d need to apply them everywhere fleas not only are dropped, but where they might spread after they hatch, which is often your entire yard. Instead, consider limiting cedar chips to those dark and humid flea-friendly areas—like under your porch.

As for nematodes, some of these roundworms indeed eat insects. But they don’t discriminate between fleas and other, less harmful bugs. You may end up replacing your flea problem with an infestation of nematodes. If you want natural pest control, you should consult with a professional.

Flea infestations are itchy and uncomfortable, but easy to prevent. With a little science, and a little patience, you can get rid of these bloodsuckers.