You Built What?! A Supersize Robotic Chess Set

Inspired by Harry Potter's magic chessboard, a Lego roboticist takes his creations to the next level 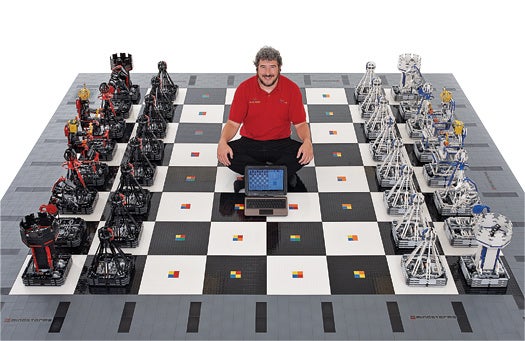 A veteran designer of Lego robots (he built one that plays Connect Four), Indiana programmer Steve Hassenplug was looking for something still grander. When he watched the first Harry Potter movie with his kids—the one with the magic chessboard and eight-foot-high knights—he knew he had found it. The massive “Monsterchess” set he created from more than 100,000 Lego pieces, however, required plenty of wizardry of its own.

Hassenplug and his friends John Brost, Ron McRae and Bryan Bonahoom started with the board. They chose standard Lego baseplates for each square and persuaded Lego to provide the rest of the parts free as a sponsor. Hassenplug designed the robotic bases for each piece, placing caster wheels in the four corners for balance, plus two drive wheels powered by separate electric motors from Lego’s Mindstorms robotics kit. If one wheel runs forward and the other in reverse, the base, and the one-to-two-foot-tall piece on top of it, spins in place. McRae, who once built a working Lego ATM, took the lead on the custom software. A touchscreen PC connects the entire board via Bluetooth and can tell up to seven pieces at a time where to move.

Most of the pieces have moving parts, including the kings and queens, which point their scepters, and the knights, which kick their forelegs. The group found that this can influence gameplay — at one convention, a young woman ignored a clear checkmate because she wanted to win with her rook, which fires a cannonball. The pieces are up to two feet tall and sit on wheeled bases with motors that control their moving parts.

Aside from the pawns, the Brost-designed chess pieces all have at least one moving part, so Hassenplug added a third rechargeable-battery-powered electric motor to the bases. Besides the rook’s cannonball, the knight’s forelegs, and the king and queen’s scepters, the bishops hold “candles” that flash with light. The queens also have different head pieces (conceived by Hassenplug’s wife and her friend, because they didn’t think two women would want to dress alike). Brost modeled most of the other pieces on standard chess designs but gave the knight a full horse’s body, which, Hassenplug says, “gets more comments than all the others combined.”

Players make their moves on a simple graphic interface, designed by the team, that shows the gameboard. A touchscreen PC directs all the changes in position that the pieces make. The group found software online for a chess-playing robot and added code to make it control all 32 pieces. They also downloaded a chess engine to act as a computer opponent and programmed a logic system so the user interface would display only valid moves. When a player selects a move, the PC communicates with the robotic piece, and it begins to roll; the pieces standing in its path make way. Players can take each other on, play against the computer, or even have the system demonstrate famous matches on its own.

Each piece needs to know where it is on the board and in what direction it’s facing to get to the correct square. A compass would be unreliable, Hassenplug figured, because all the electronics might disrupt it. Instead he added color sensors to all the bases and small four-color squares in the center of each space on the board. One section of those four-color squares is the same color on every space, which allows the robot to determine its orientation. The rest of the colors vary, and this information is stored in the PC. By reading these unique identifying color combinations, the piece can communicate with the PC and orient itself. 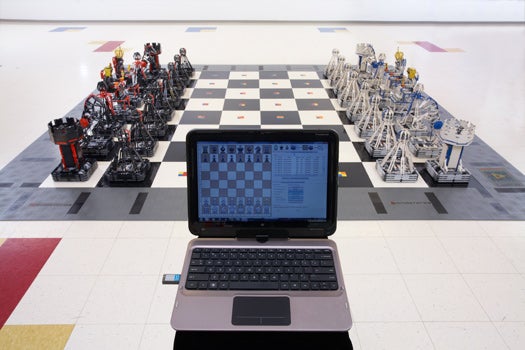 The “Monsterchess” Set Is Controlled By This PC

The PC is connected to the board via Bluetooth and can tell up to seven pieces at a time where to move. 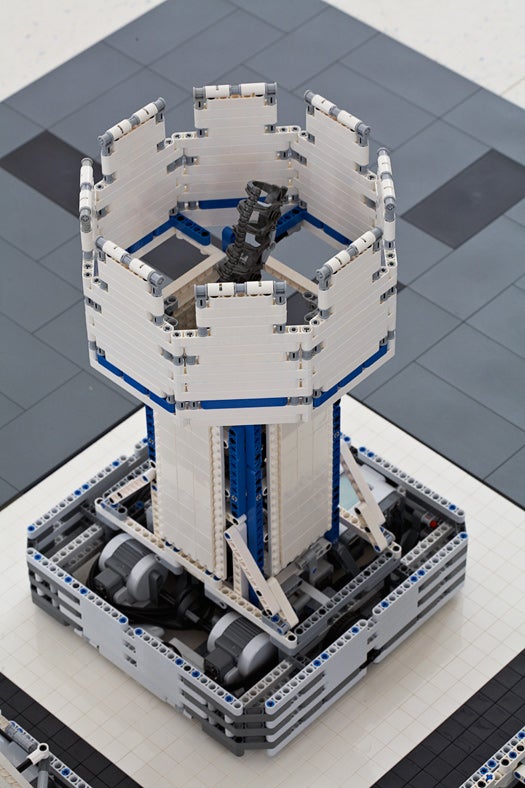 The rooks are equipped with the ability to fire cannonballs. 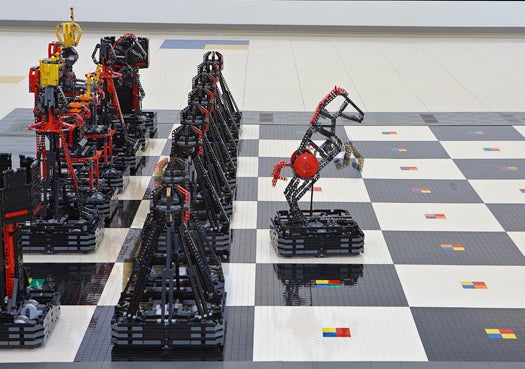 The Black Team On The Offensive 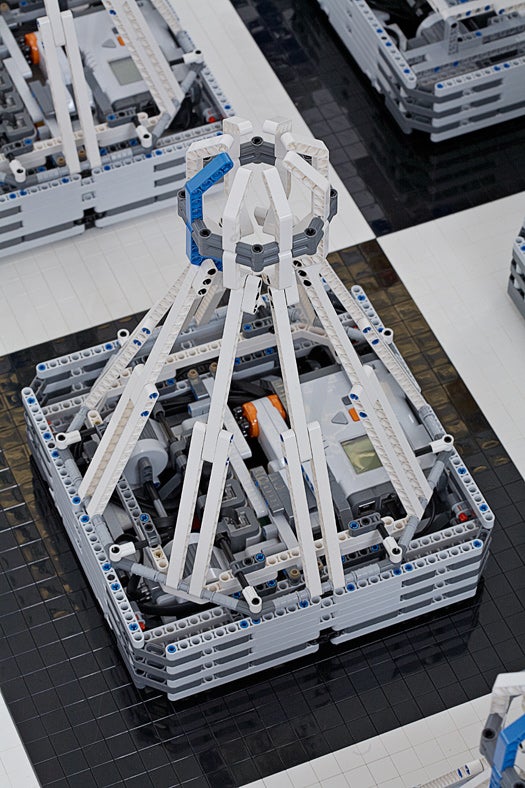 Portrait Of A Pawn 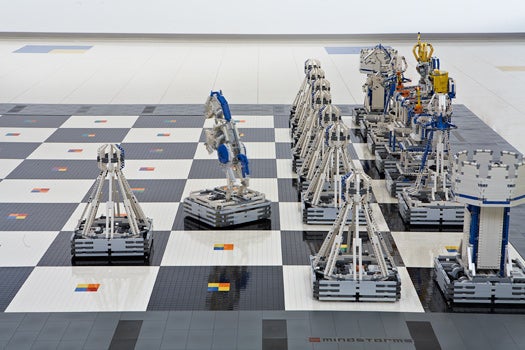 The White Team Mounts An Attack 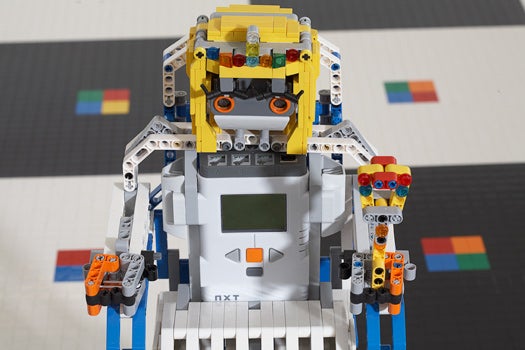 A Queen, Complete With Lego Eyelashes

Kings and queens are able to point their scepters.
chess
DIY
november 2010
robots
you built what