Germany’s Festo is no stranger to robots that mimic animal biology, but its new elephant trunk-inspired robot arm is more... 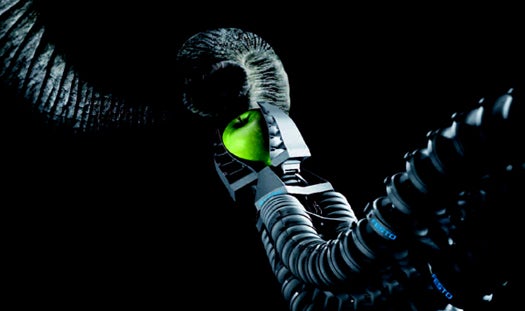 Germany’s Festo is no stranger to robots that mimic animal biology, but its new elephant trunk-inspired robot arm is more concerned with the fragility of human physiology than the strength of the elephant. The arm – known as the Bionic Handling Assistant – is certainly strong and flexible like the appendage it’s modeled after, but it’s also safe for humans to work with, employing a battery of resistance sensors that make human-machine interaction less of a safety hazard.

Safety fears have been a major obstacle keeping the personal robotics revolution from fully blooming, as it can be dangerous for humans to work alongside large, strong robots that could potentially injure them. After all, robots don’t know pain and have trouble assessing dangerous situations in which their actions might harm a human being. In industrial settings, this often keeps robots cordoned off in their own spaces where they can’t accidentally hurt someone.

So Festo set out to create an arm that is both strong and dexterous as well as safe for humans working alongside it. Using 3-D printing technology, the engineers (and their partners at the Fraunhofer Institute) created lightweight and soft trunk segments that are powered by pneumatic artificial muscles that drive some serious force underneath. The trunk segments are littered with resistance sensors that help it to be aware of contact with people and objects around it. A three-fingered gripper at the end is also designed to need little force to grasp a range of objects.

The result is a multifunctional gripper ‘bot that could be applied to a range of industrial applications, as an extra set of hands on the lab bench, or even as an assistant in the operating room. And since it can interact with other Bionic Handling Assistants to pass objects back and forth, multiple robo-trunks could be deployed in arrays that assist both humans and each other. No word from Festo on whether it will work for peanuts.