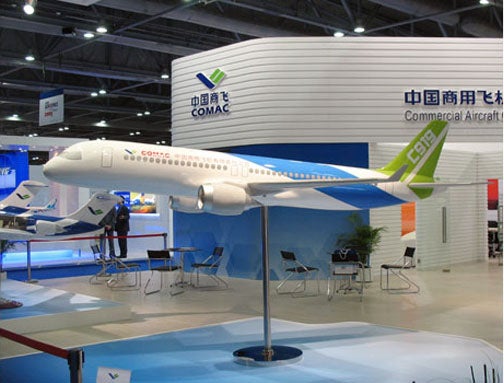 It’s been a tough couple of weeks for the world’s two premier builders of large commercial jets. An Airbus A380, the new crown jewel in Airbus’s fleet, suffered an engine explosion after taking off from Singapore earlier this month, forcing a harrowing emergency landing. Then a test-flight of Boeing’s 787 Dreamliner had to make an emergency landing after smoke filled the passenger cabin. But if the Big Two thought things couldn’t get any worse, they were wrong: China today unveiled the first full-sized models of its own large jetliner, the C919, a 156-seat passenger aircraft that will go toe-to-toe with Boeing and Airbus’s offerings by 2016.

The C919 isn’t a massive superjet like the Dreamliner or the double-decker A380, but a high-capacity, domestic-haul jet that will stack up against Boeing’s 737 and Airbus’s A320. With China itself being the world’s fastest-growing aviation market, that’s a tough pill to swallow for Boeing and Airbus. China will need an estimated 4,000-plus jets over the next 20 years, costing some $480 billion. Boeing and Airbus currently share the Chinese market fairly equitably, but that won’t be the case should the C919 prove successful.

And that is an “if.” Building jetliners is by no means child’s play, and the challenges of building and maintaining large passenger airplanes explains why there are so few players in the arena to begin with. But China isn’t starting from scratch. Although the C919 design belongs to Commercial Aircraft Corp. of China, the guts of the plane will come from some of the West’s biggest aviations technology company’s, including Honeywell, GE Aviation, and Eaton Corp.

China is leveraging its massive market to bring to bring the best in aviation technology to its shores by forcing Western companies who want a piece of the action to form joint ventures with Chinese companies. It’s a slick move; China offers access to its vast marketplace (THE marketplace of the next few decades), and in exchange Western companies supply technologies to Chinese companies that may one day be direct competitors.

But before we chalk up aviation as another industry the U.S. and Europe have lost to China, the C919 will have to fly. This isn’t China’s first attempt at getting into the aircraft game, but thus far Boeing and Airbus – with years of experience making massive metal tubes climb into the air – have remained atop the big jet business. China has a savvy plan to pull technologies into its orbit, but whether or not it can make a 156-seater fly in just five years is another challenge altogether.