Every now and then a DIY project surfaces on the Internet that’s so cool we have to share it, especially... 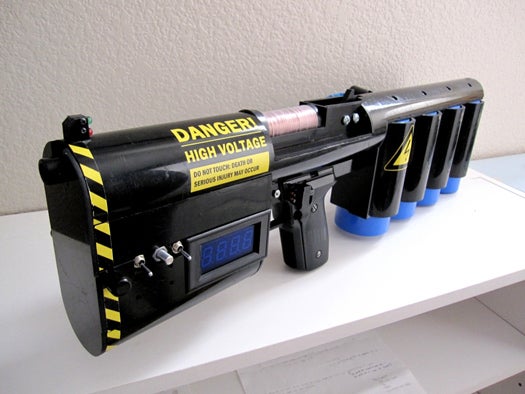 Every now and then a DIY project surfaces on the Internet that’s so cool we have to share it, especially those we should probably recommend you not try at home. YouTube user Larsplatoon’s 1.25 kilojoule coilgun is exactly this kind of project. We’re not even sure where this battery-powered projectile slinger falls with respect to your state’s gun laws, but perhaps the best advice we can offer is what’s plastered to the side of the coilgun’s receiver: “Danger. High Voltage. Do Not Touch. Death or Serious Injury May Occur.”

The 2-year on-and-off project packs a 12-volt high drain battery, four huge capacitor housings in the stock, and a charging circuit in the foregrip. A voltage regulator board salvaged from old cell phones keeps the thing from overcharging itself, and a standard trigger mechanism switches the power from the charger to the gate that dumps all the energy stored up in the capacitors to the coil, which generates a magnetic field strong enough to hurl a metal projectile downrange.

In other words: flip the charging switch, watch the capacitors charge up, and when the light switches from red to green, fire away. Larsplatoon claims in the video caption that the energy stored in the capacitors is 78 times the lethal amount for human beings. We haven’t tested the thing ourselves, but the video below speaks for itself. Destruction begins around 2:50.