A Husband and Wife Build a 19th-Century Wooden Submarine

The Argonaut Jr. 2010 drives along the seafloor 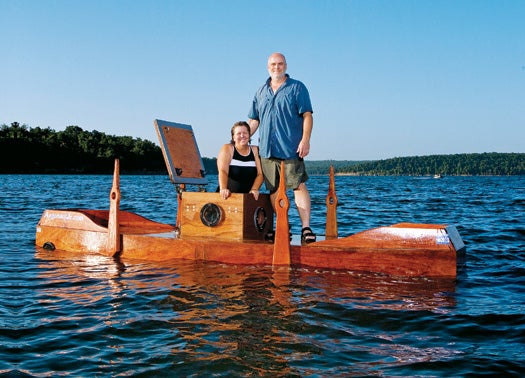 Doug and Kay Jackson built the Argonaut Jr. submarine with the help of friends in their front yard in Tulsa, Oklahoma. The sub is a wooden replica of Simon Lake's 1894 sub originally constructed in New York City. Benjamin Sklar for Popular Science. Benjamin Sklar
SHARE

In 1894, American inventor Simon Lake designed the Argonaut Jr., a wheeled vehicle that would drive along the seafloor, the only way to reliably navigate underwater at the time. The unusual concept has inspired sub aficionados ever since. Among its fans are Doug and Kay Jackson, married DIYers from Tulsa, Oklahoma, who in June built a watertight replica from lumber, lead and enough marine epoxy to overflow a bathtub.

Because no pictures of the Argonaut Jr.’s interior remain, making an exact replica would have been impossible. Instead, the Jacksons added a few modern touches while staying faithful to the basic design. Like its predecessor probably was, it is an ambient sub—it keeps the air pressure inside the cabin equal to the water pressure outside. Doug designed the narrow, tall sub using CAD software. The curved part of the frame is mostly 1×4 beams, while the underside is steel. For the rest of the hull, the couple found that four layers of quarter-inch-thick plywood pressed together by epoxy was the best mix of strong and cheap. For the 40-inch-tall, 4.5-inch-thick wheels, they cut and sandwiched together three layers of lumber and added leftover treads from a local tire shop.

The initial test dive started poorly when the trailer carrying the sub broke loose and careened into the lake. But the Jacksons recovered, poured a celebratory beer on the hull, closed the hatch, and took the Argonaut Jr. 2010 for its first successful drive, 10 feet below the surface of the water. 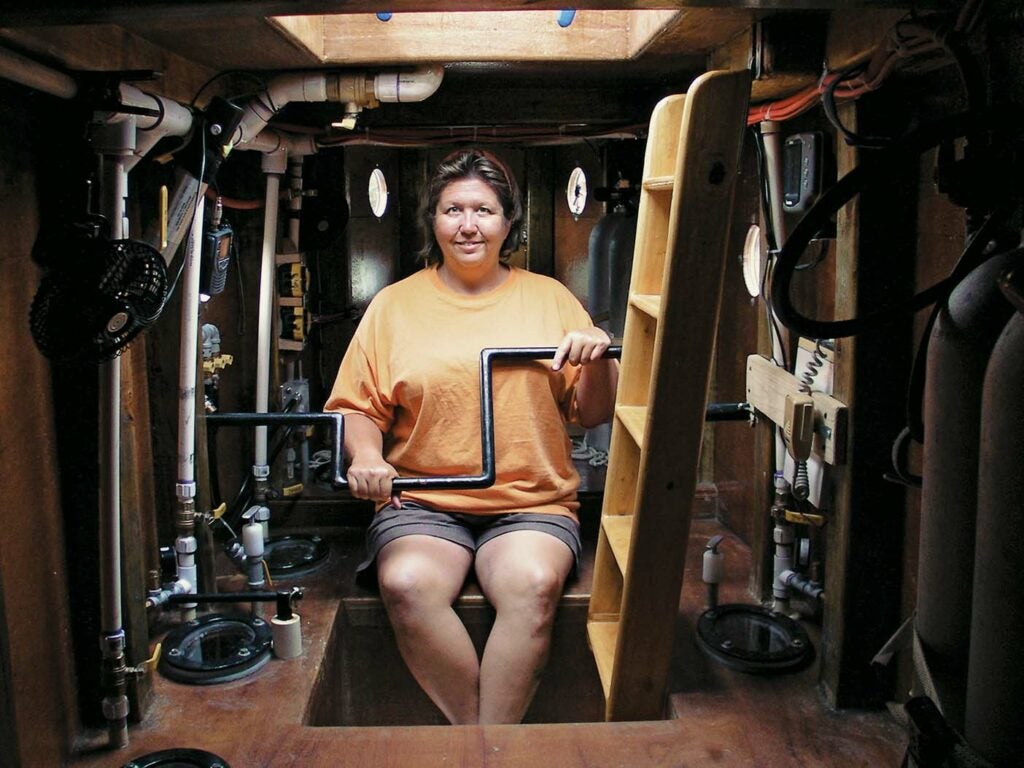 The sub’s cabin has standing room for only two people.

DESCENT
The operators lower a pair of anchors to the seafloor and, from the sub’s single cabin, open a series of valves linked to six ballast tanks. Water floods the tanks, making the vessel heavier. An electronic anchor-winch controller winds up the cable, further pulling the sub down. As Argonaut Jr. descends slowly, an automatic air-pressurization system retrofitted to the craft draws air into the cabin from scuba tanks, equalizing with the ambient water pressure.

ASCENT
To surface, the operators drop the anchors (stored outside) again. Once those hit the floor, the sub rises. The Jacksons let out more cable and open valves that release compressed air into the ballast tanks, gradually expelling the water and making the sub more buoyant. “You open or close valves, and you go down or you go up,” Kay explains. “It’s really simple.”

DRIVING
The Jacksons welded a trolling motor normally used for small fishing boats to the steel-pipe-based tiller. By turning the tiller’s handle, they redirect the motor’s propeller and turn the sub. They can also use a hand crank to drive the craft. The drivetrain consists of 30 feet of roller chain and matching sprockets, custom-cut from steel plates on their CNC machine. A dozen turns of the crank moves the sub about 10 feet.

SAFETY
The Jacksons received help from sub experts on the Internet, many of whom urged them to install a drop-weight system for emergencies. They ended up cutting or casting 3,500 pounds of lead blocks that fit jigsaw-like into the exposed steel frame on the bottom. If they need to ascend immediately, they can turn a handle that releases all the blocks at once. With 3,500 pounds shed, the sub, weighing a scant 1.25 tons, rockets up to the surface. The sudden change in pressure could cause the sub to explode, though, so Doug says that in all but the direst circumstances, “I’d swim out and leave the sub on the bottom.” 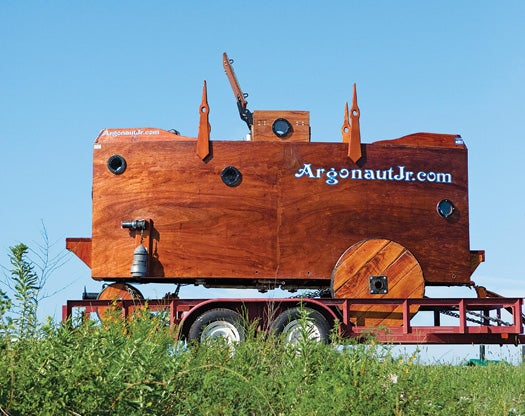 Doug and Kay Jackson built the Argonaut Jr. submarine with the help of friends in their front yard in Tulsa, Oklahoma. The sub is a wooden replica of Simon Lake’s 1894 sub originally constructed in New York City. Benjamin Sklar for Popular Science

DIY
October 2010
submarines
you built what?!