Video: Scan and Mold Yourself at Home with a Budget DIY 3-D Scanner 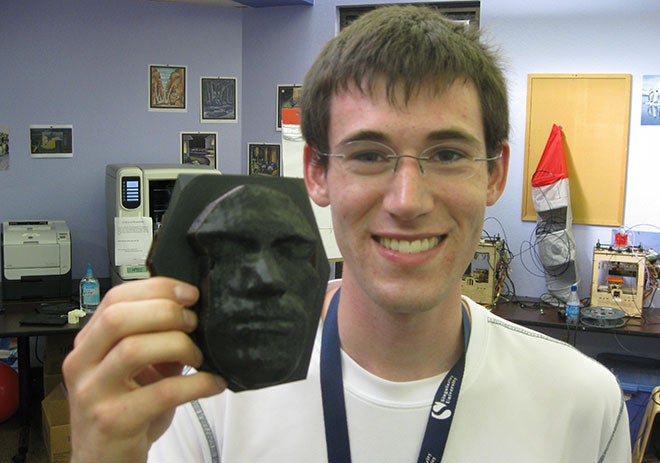 With little more than a laser, a webcam and a MakerBot, you can make a 3D plastic replica of your face — or anything else you might want to copy, just in case.

A research engineer at NASA’s Ames Research Laboratory has built a cheap 3D scanner that might go on sale this fall through the MakerBot store. You can sign up for updates on builder Andy Barry’s Web site.

As shown in the above photo, Barry used it to make a nice carbonite mask of himself. He says it could be used to create plastic replicas of anything that can be placed in front of a Web cam, including damaged plastic goods that you’ve glued back together.

The MakerScanner involves a laser and a camera that are offset at a distance. Then you place an object at a third point between them, forming a triangle. The laser sweeps a red beam across the object and as it is moved closer to the camera, the beam appears shifted to the side, as Barry’s Web site explains.

That redshift provides some information about the depth of the object, which a computer can use to calculate the object’s thickness.

Barry says the technology already exists, but he wants to make it smaller, cheaper and accessible to anyone. He built his first prototype in three weeks during the beginning of his senior year at Olin College of Engineering, according to
Gadget Lab. This summer, he’s been improving the design at Ames’ Autodesk Innovations Lab and using it to scan people’s faces.

This video shows point cloud data gathered from two separate scans of a nautilus shell, with the color information removed.