Build A Keyless Car Unlocker Out of a Cellphone

Locked your keys in the car again? No problem— now you can open the doors using your phone 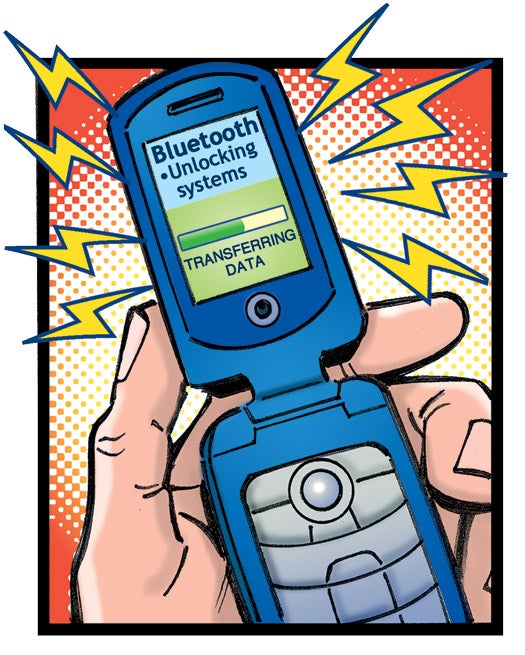 Sending a photo to the printer triggers the system to unlock the doors. Peter McDonnell/Linda De Moreta Represents
SHARE

Car Keys on the Front Seat

Drive for long enough, and eventually you’ll experience it: that helpless feeling that comes when you discover you’ve locked your keys in your car. Before it happens again, install a system that unlocks your car doors with your cellphone. The setup involves using the Bluetooth module from a cheap wireless printer, which receives a command from your phone and sends it to a switch connected to your car’s spare electronic key fob. Instead of telling the printer to print a photo like it normally would, the phone signals it to trigger the unlocking mechanism. Stash the system under a seat (plugged into a lighter socket for power), and a few keystrokes will pop open the doors from up to 10 feet away.

Sending a photo to the printer triggers the system to unlock the doors.

2. Route two wires into the printer via the paper exit slot. Solder one to the “TP14” solder connection point on the circuit board, and the other to any ground point on the board.

3. Reassemble the printer. Slide the two wires through the paper exit slot. Solder the other ends of those two wires to each one of the coil prongs on the relay. Solder two different wires to the remaining switch prongs of the relay.

4. Open the key fob and locate the button that unlocks the doors. Solder one relay wire to each pole of the switch. Reassemble the fob. Connect the printer’s power supply to an inverter, and plug it into your lighter.

5. Turn on the printer. Enter passcode 6000 to pair your phone with the printer. Send a photo via Bluetooth, and the relay will trigger the key fob to unlock your car’s doors.