Video: Kenyan Tinkerer Builds a Plane From Scratch, Aims to Fly Next Week

A Kenyan backyard tinkerer could become his country’s version of the Wright brothers next week. Gabriel Nderitu, an I.T. worker... 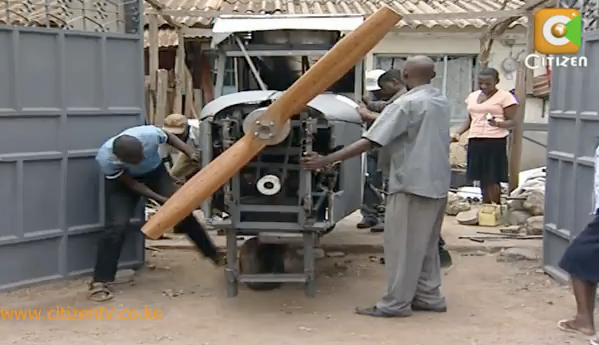 A Kenyan backyard tinkerer could become his country’s version of the Wright brothers next week.

Gabriel Nderitu, an I.T. worker with no background in aviation or engineering, put together a hand-built airplane and is planning a test run above the city of Kitengala.

In the video below, a rooster crows as Nderitu and some friends work in a dirt yard to put on the airplane’s finishing touches. Nderitu, 42, spent six months doing research on the Internet and about a year building his two-seater plane from scratch. It involves a Toyota engine driving a 74-inch wooden propeller. The engine turns up to 4,000 rpm and works through a reduction belt drive, according to AVWeb, an aviation site.

Five men helped with welding and assembly, and Nderitu used aluminum sheeting to build the wing and ailerons. He acknowledges he didn’t try to reinvent the wheel — he just studied airplanes and tried to copy them.

Nderitu said he was interested in aviation as a child: “Maybe it was a missed career which I’m trying to re-create.”

The plane weighs about 1,700 pounds when fully assembled, and the entire thing comes apart, making it easy to transport — in the video, Nderitu and his friends push the fuselage through a metal gate, kicking the wheel to align it properly. Two Kenyans have reportedly tried making aircraft before, but if Nderitu’s airplane flies, it will be a first for the country. He says he wants to complete the plane whether it flies or not, however.

“If a guy says that ‘I want to build an aircraft’ it seems like he’s from the moon, or from somewhere. And if it happens, if it at least lifts off, even if it is three feet, it shows that you have gone somewhere,” he says.