Build Your Own Kamikaze Go-Kart

We show you how to add remote control to any project, large or small 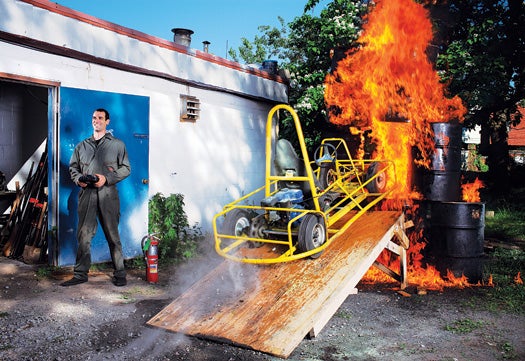 You may associate remote control with the urge to jump little R/C cars through walls of fire in your backyard, but that’s just the beginning of what you can do with the technology. Once you’ve mastered the basic concepts, the same parts and techniques used in toys can be used to control machines big and small, practical and absurd.

The basic R/C setup consists of a transmitter, a receiver, and several actuators on the receiving end—either servos (electric motors that rotate to a specified position or speed) or relays (which turn electrical components on and off). Commands from the transmitter about position, speed of rotation, or simply “on” and “off” are sent to the onboard receiver, which decodes them into a signal that can be interpreted by the connected servos and switches.

Although most of the parts of a hobby R/C system can be used in something larger, big machines like a lawn tractor or an excavator often require more torque than a hobby servo can provide. Those machines call for a high-powered super servo. Commercial models exist in the $500 price range, but you can make your own version for $75 or less. In fact, I just did. Some friends and I built gas-powered bumper cars several years ago, but at the insistence of our internal organs, we had had to set them aside. Now, using the DIY super servo for the steering and a hobby servo to control the throttle, the carts have a new life in R/C form. They’re just as much fun as our original bumper cars, with none of the spinal trauma. And I can do flaming-obstacle jumps on a much bigger scale than ever before.

1. Pulse-width modulation signals indicating servo position or whether the relay switch is on or off are transmitted via radio signal to the receiver.
2. The receiver onboard your R/C project receives the radio signals and translates them into an appropriate set of commands for each servo channel.
3. Signals from the receiver tell the servos and relay switches what to do. Potentiometers use position feedback to ensure that the servos are close to the position requested. 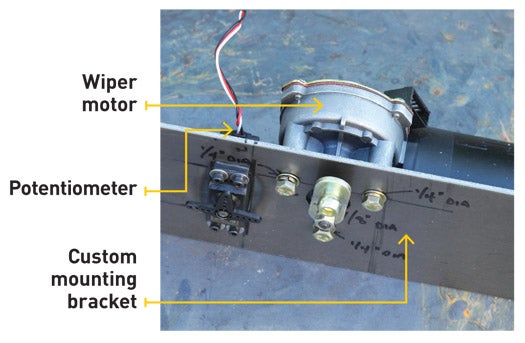 Hobby servos are great, but sometimes you need more power. You can make a DIY super servo using the windshield-wiper motor from a car. Here’s how:

1. Get a wiper motor. Try MonsterGuts.com, which sells a 12-volt DC motor for only $16.
2. Attach some means of feedback to measure the position of the motor’s shaft. I used a Futaba s3003 hobby servo ($11; TowerHobbies.com) rewired to act as a potentiometer, but a 5K potentiometer from RadioShack would work equally well.
3. Connect the motor, the feedback potentiometer and the R/C pulse-width modulation signal to an appropriate motor-controller board. The Pololu Jrk 21v3 ($50; pololu.com) is a good choice.
4. Some basic calibration should give you a DIY super servo capable of around 15 pound-feet of torque, enough to control just about any midsize machine. If even that isn’t enough, you can build your servo with a larger gear motor and motor controller.