You Built What?! A Propane-Powered Fireball Gun

The model shoots fireballs 20 feet into the sky 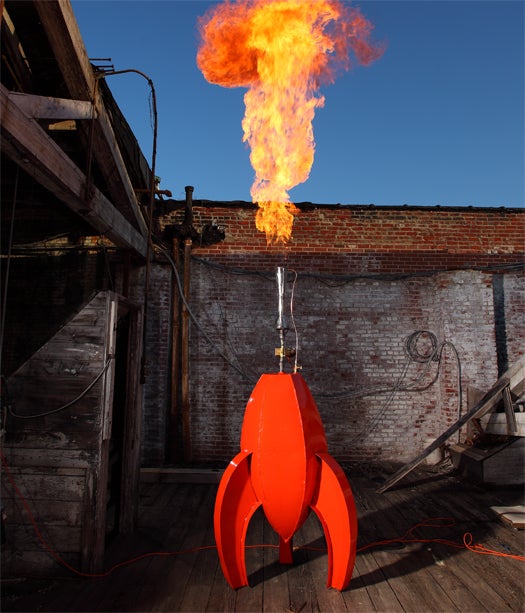 Fire enthusiasts have long used propane “poofers” to shoot huge fireballs for oddball art projects and theatrical special effects. As someone who has always been, as my grandfather puts it, “interested in exothermic reactions,” I’ve seen and built my share of them, too. But this time around, I decided to try a new approach that incorporates some striking visual elements as well as a bit of science.

My new model has a cone-shaped mixing burner known as an inspirator, which uses the pressure of the escaping propane to form a vacuum that draws in atmospheric oxygen. The mixture creates more-complete—and louder—combustion, producing a sound like a rocket launch and a ferocious column of flame reaching more than 20 feet into the air. Combining that burner with a valve that opens instantly when electrical power is applied gave me the ability to send up one intense flame after another, with just the push of a button. The final touch was a Buck Rogers–style gas tank.

It took 40 crazed hours of near-nonstop parts acquisition and construction at my shop and testing in a friend’s partially collapsed warehouse to finish the poofer. Why would I go to all that trouble just to shoot fireballs over the Philadelphia skyline? The better question is, why not? 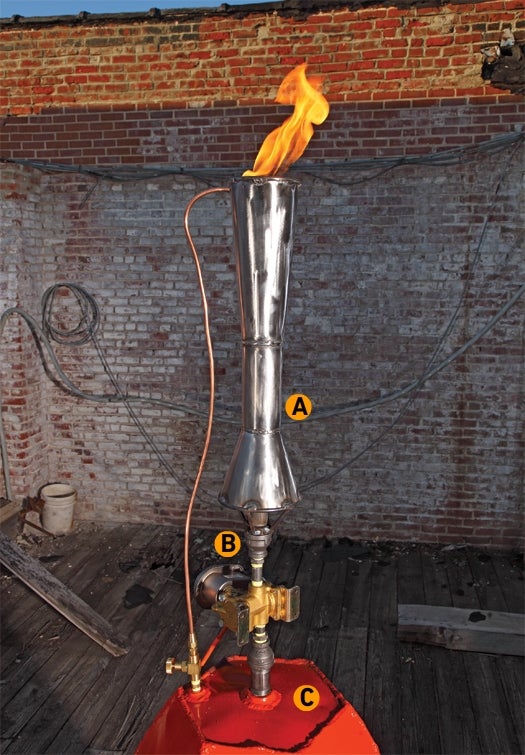 A. The Inspirater B. The Valve C. The Gas

Time: 40 Hours
Cost: $400
The Inspirator
The pressure and velocity of the escaping propane gas create a vacuum in the lower cone, which draws in the surrounding air. As the propane and air enter the upper cone, they slow down and mix. The improved fuel-to-air mixture results in a faster flame-front propagation—put simply, a much louder noise and a more massive inferno.

The Valve
Industrial surplus yards can be a great resource for projects like the propane poofer. I found a 3/8-inch ASCO electrically actuated valve and an old machinery switch box for only about $34. A solenoid valve like this one opens up a rubber diaphragm when an electrical current is applied, opening the valve for fluid flow.

The Gas
The device stores propane in an accumulator, releases the fuel, and ignites it with a pilot flame at the top cone of the inspirator, creating the fireball. Here, the accumulator is the rocket—a fabricated hexagonal pressure vessel with more than 30 feet of airtight welds. An accumulator this large can send up fireballs almost nonstop. But I had to have extra propane tanks on hand because they tend to freeze: The compressed gas expands as it’s drawn from the tank, consuming heat energy in the process, so the outside of the tank develops frost and the pressure inside it drops, rendering it temporarily unusable. 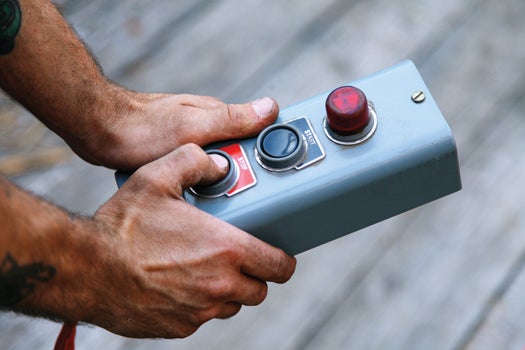 The solenoid valve is controlled by a switch box which regulates the release of propane.

The Switch Box
The parts for the switch box cost $16 at my local industrial-surplus supplier, a fraction of what they would have been if I had bought them new. In a previous incarnation, the box stopped and started industrial machines, but for me it controls power to the solenoid valve. Together the valve and box release copious quantities of propane.