Two days, plenty of propane, and a lot of patience yields a one-of-a-kind engagement ring 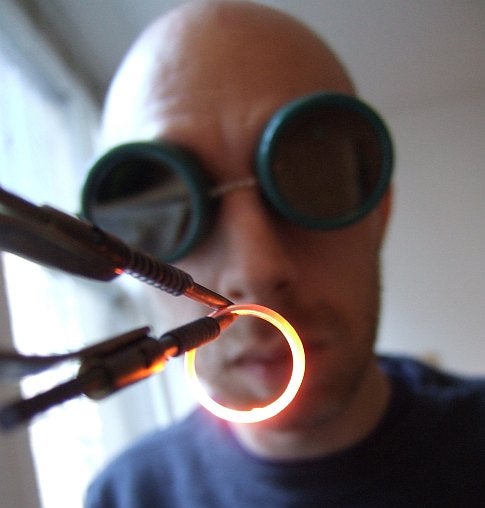 Novelty rings are sweet. But if you actually plan to pop the question on Valentine's Day—and you want to make the ring yourself—you'll need to consult with a professional. That's what Popular Science contributing editor Mike Haney did: He forged an engagement ring for his then-girlfriend with help from jewelry maker Sam Abbay. Difficulty: Five out of five hearts. Sam Abbay
SHARE

When I finally made peace with the realization that I actually wanted to marry my girlfriend, thoughts about the typical next steps made me cringe: backroom bargaining in the diamond district, endless visits to mall jewelry stores to try to learn about cuts and clarity, spending way too much money I’d rather spend on traveling or tools or meat. Fortunately, my nascent furniture-building hobby has accustomed my girlfriend to appreciating my lovingly flawed home creations, so I decided to go the same route with the ring. Googling “DIY wedding rings” immediately brought me to Sam Abbay and his one-man shop in New York’s financial district.

Sam is a 33-year-old who’s been building jewelry since high school and set up business as New York Wedding Ring here in the city a few years ago to teach people how to create their own engagement rings and wedding bands. Since I had wanted to keep this a surprise, I didn’t ask Lisa much about what she had in mind, but I knew she liked antique and estate rings, so I searched for images of Art-Deco-era designs. When I found one I liked, I met with Sam to talk about the build and materials. He walked me through the various metals and their properties, and we settled on platinum. Then we turned to stones. Lisa had made it clear she didn’t want a diamond and let slip that she liked sapphires, so Sam explained lab-grown versus mined (the former is lighter, just as beautiful, and about a sixth the price), and showed me samples of different sizes until we found one that was right for my design. Then we scheduled two days for the build — the week between Christmas and New Year’s, when I could lie and say I was at work. 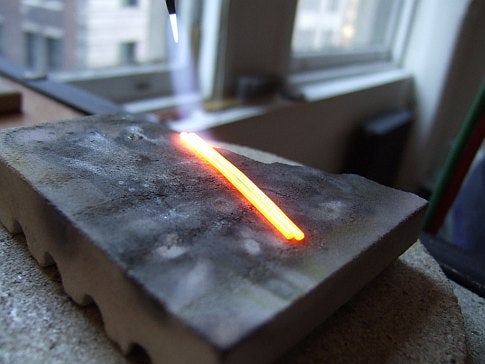 Sam ordered the raw materials, so on day one of the build, I began with two four-inch lengths of platinum in different gauges, or thicknesses — one for the actual ring, one for the details. As he typically does on more involved designs like this, Sam built the same ring out of cheaper palladium alongside me, so he could demonstrate each step but let me do it on my ring. Since I wanted the ring to have a groove down the center, I actually made two rings, slightly flattened, and soldered them together. Soldering at this scale is crazy: The solder is a platinum alloy that melts at a slightly lower temperature than the ring platinum, and it comes in sheets that Sam cuts into flakes about the size of glitter. With tiny tweezers, you set a flake over the joint you want to seal, try not to look at it wrong lest it move, then heat it with a small oxypropane torch until it melts — and not a second longer or you could melt the ring. You also use the torch frequently to anneal the platinum: heat it red-hot for 30 seconds and then cool it, to realign the crystals and make it less brittle.

Turn the page to see the finished ring. 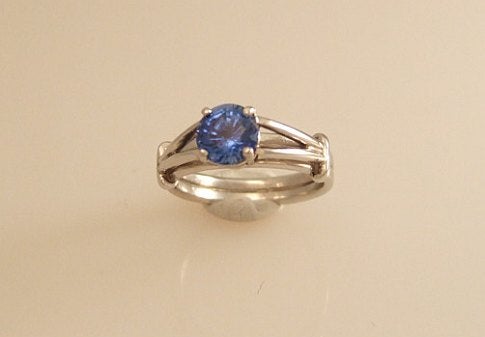 At the end of the first day, we had a ring with a basket setting attached on the top. Most of the 13-hour second day was spent on the little bridges and cross-bar details. To my surprise, there were few secret tips for making this stuff: it’s just a lot of precision work with very small saws and very small files, and a lot of patience. Each bar had to be mitered on a couple of edges to sit flush, then set delicately in place and soldered to the other pieces and to the ring. I wish I could tell you it came out flawless, but there’s definitely some off-center stuff going on, and I could have used about another eight hours with a file set and polishing cloths to work out all the little nicks and bits.

By 9 pm, the ring was together and polished; all that was left was to set the stone — and screw up big one more time. Once the rock is in the setting, you have to bend the prongs to hold it in place, then trim and file them. Sam demonstrated on one prong and handed me the wire cutter and jeweler’s loupe to do the other three. Apparently about that same time, I was having a bout of the DTs, because I immediately cut off way too much. This is where Sam really shone as a teacher — even though my screwup cost him an evening with his girlfriend, he was entirely patient and moved quickly through the fix. We had to bend them all back, remove the stone, solder on a new length of wire, cut it and file it until it matched the other prongs and re-set the sapphire. I finally walked out of there around 11 pm, exhausted and fighting the urge to just walk in the door, throw my creation at Lisa, and get it the hell over with.

Fortunately I fought that urge, and waited until we were on vacation on an island in Mexico a couple of weeks later. She’s not a hard gal to please, but she loved the ring, and on a subsequent trip to her hometown, it was a huge hit with the future in-laws. Now if only the rest of the wedding were so easily solved with a little metal and a blowtorch. 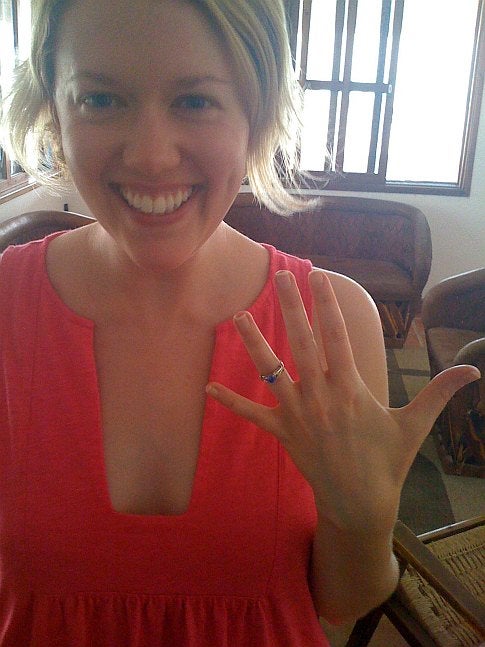