One dinosaur footprint is worth a thousand words

Dinosaurs stomped all over this remote Scottish island and left the prints to prove it. 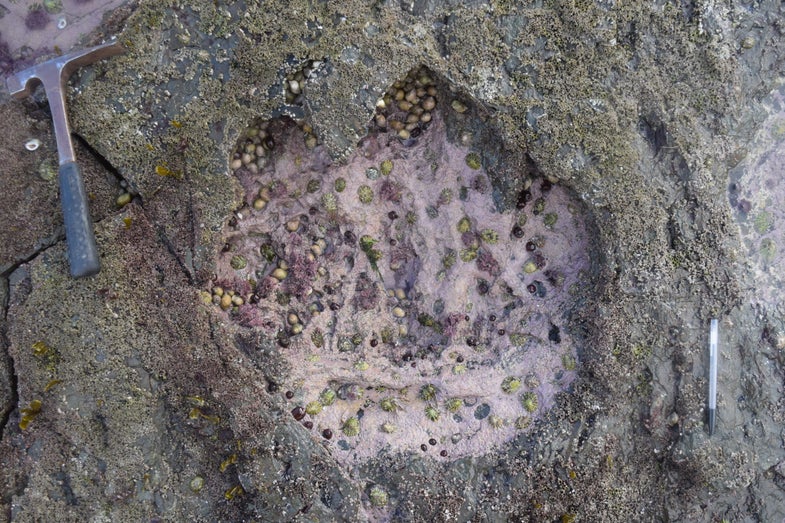 Amidst the wild sloping hills and picturesque lochs that dominate the landscape on Scotland’s Isle of Skye, the lichen-encrusted divots in rocky tide pools are easily overlooked. But they mark where giants walked the earth 170 million years ago.

The footprints were made by long-necked sauropods and predatory theropod dinosaurs making their way across a shallow, sodden lagoon.

If you think that sounds familiar, you’re not wrong. Paleontologists involved in this study announced the discovery of a similar set of dinosaur footprints on Skye back in 2015. Dinosaur footprints have been identified on the island since 1984, when a lone footprint was discovered near the same spot as the present discovery.

“The more we look on the Isle of Skye, the more dinosaur footprints we find,” Steven Brusatte, a paleontologist at the University of Edinburgh who lead the fieldwork said in a statement. “This new site records two different types of dinosaurs—long-necked cousins of Brontosaurus and sharp-toothed cousins of T. rex—hanging around a shallow lagoon, back when Scotland was much warmer and dinosaurs were beginning their march to global dominance.”

The most recent discovery of 50 or so tracks seems to re-emphasize the 2015 findings that sauropods, who stood about six feet tall at their hips, did spend some time splashing around in shallow waters (instead of being limited to land, as previous research inferred). Now, paleontologists have asked that people living on Skye keep an eye out for more tracks.

“Let the big nerds who do this for a living know, so we can chase them down and tell these dinosaurs’ stories,” lead study author Paige diPolo told the New York Times. “I’m willing to look at a thousand tidal pools that are not footprints in order to key in on the one that might be.”

But why are researchers so interested in dinosaur footprints, anyway? They aren’t quite as visually striking as complete dinosaur skeletons, but scientists can get a lot of information from these trace fossils.

Identifying a specific species of dinosaur from footprints alone can be tricky especially if there are no fossils nearby. But impressions left in soil can show what bones can’t, including whether or not dinosaurs had webbed feet and what kind of gait they had, and even the different ways an animal could move. It can also give us the information needed to calculate a dinosaur’s speed. While some dinos were slow, others were capable of running at speeds of 27 miles per hour.

The depth of the footprint can tell paleontologists something about the dinosaur’s size, letting them estimate how large and heavy it is. It can also tell them something about the environment—just like you, a dinosaur will sink deeper into soft mud than hard dirt.

Lines of footprints are called trackways, and the placement of footprints across the sediment can provide insight into behavior that no biologist will ever be able to observe (without a functioning time machine). Footprints left by the same type of dinosaur (or other animal) walking together at the same speed may indicate that they traveled in herds.

Different kinds of dinosaur or animal tracks all in the same place can help researchers understand how multiples species interacted, whether that’s a bunch of herbivores, or even dinosaurs and mammals all hanging out in a similar spot, or predators chasing down prey—it’s all there in the prints.

So if you happen to be out walking and notice what looks like a footprint in the old, weathered rock beneath you, stop and take a closer look. Who knows what stories it might have to tell?