Why The Government Should Fund Unpopular Science

It's a no-brainer: The government should be spending money on science that nobody else wants to fund.

In April, President Obama announced, to much fanfare, that the government would spend $100 million on a detailed map of the human brain and how its neurons interact. The project is a waste of money. Brain mapping is well funded by public and private sources, and the feds should instead spend your dough on important things that business won’t.

The brain map was going to happen anyway. For example, IBM has a computer simulating 530 billion neurons; the Blue Brain Project is modeling the rat brain at the cellular level; the Allen Brain Atlas is mapping how genes in the brain turn on and off. Projects like these already have validity, and some have been funded by the government for years. To a certain extent, Obama’s initiative is making a big deal out of something the government had been doing for some time.

Also, brain research is already commercially viable. Mind-machine interfaces are available in the toy aisle, where you can buy Mattel’s Mindflex Duel, a headset that lets you move a ball by changing your concentration. Between that and the automated health care and banking that IBM’s artificial-intelligence computer Watson makes possible, there’s plenty of money to be made.

Attack problems whose solutions are bad for business.If the government wants to fund a grand national effort, it should attack problems whose solutions are bad for business. For instance, let’s cure cancer. The biomedical industry treats cancer with drugs, surgery, and other high-budget interventions. But it has no financial incentive to find a cure, which would destroy its $82-billion-a-year business. The U.S. government spent only $5.1 billion on cancer research in 2011. We need more funding for cures. And if we really threw some money at it, we might even find out what environmental factors help cause cancer and then move from curing it to preventing it altogether. The same argument applies to other major maladies in the U.S.: heart disease, diabetes, and obesity. 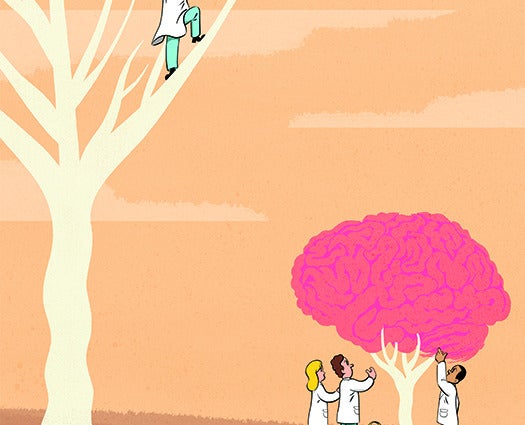 The government should also fund research into how to get more low-income students to graduate from high school. Studies have shown time and again that increasing education rates leads to a decrease in crime. One key paper found that raising the graduation rate by just 1 percent in 1990 would have resulted in 100,000 fewer crimes that year, saving the country approximately $2 billion. While preventing crime is in every citizen’s interest, private industry certainly isn’t going to make it happen. It takes the passage of a generation (and the new scientists and engineers that come with it) to see the benefit. And getting any return on investment would be exceptionally difficult, if not impossible, because the financial gains would be so widely distributed across the economy, investors wouldn’t be able to measure any direct profits.

The sad reality is that Obama’s initiative is more about good public relations than good science. If problems such as cancer and crime were easy to solve, maybe they’d have gotten the nod. But then, we wouldn’t have needed the government to solve them in the first place.