Your Very Own Personal Tank

Deep mud, sand and snow are no match for this go-anywhere mutated motorbike. Click here for an exclusive 3-D look 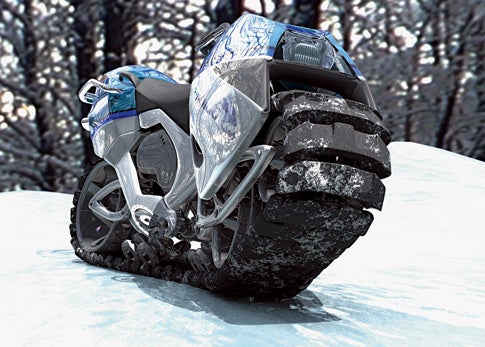 You may not have room in your garage (or budget) for a dirt bike and a snowmobile and a four-wheeler. But what if one vehicle could take the place of all three? That´s the idea behind the Hyanide, a wild concept vehicle created by German designers Oliver Keller and Tillman Schlootz for the 2006 Michelin Challenge Design. This year´s competition showcased vehicles made especially for California´s diverse and often rugged topography.

Named for its supposed resemblance to a crouching hyena, the Hyanide is designed to run on a flexible rubber tread that spans the machine´s entire underside. So if any part of the bottom is touching the ground, the Hyanide should be able to move, no matter how deep the quagmire, no matter how rough the terrain. The tank-like tread consists of 77 identical segments-each made from hard plastic covered with tire rubber held together by Kevlar rope. Each segment flexes independently, making the tread significantly more limber than if its components were rigid.Not only does this setup help with traction, but it would allow the tank-cum-motorcycle to corner like no other vehicle.

Both the front and rear of the Hyanide rotate into a turn, which would give riders extra control while making sharp turns or climbing hills. To drive the vehicle, you´d steer with your hands as well as your feet, and you´d wear special shoes that snap onto the pedals, like on a racing bicycle. To turn left, for example, you´d push the right side of the handlebar forward, to point the front of the tread left-it´s the same motion as on a motorcycle. At the same time, however, you´d also push back on the right pedal, angling the rear of the tread into the turn. This action would twist the tread into a crescent shape and whip the Hyanide around a turn.

The Hyanide currently exists only as a one-fifth-scale model, and Schlootz and Keller have no plans to bring a production version to market. Keep your fingers crossed, though-Hyanide´s unique drivetrain impressed a lot of automotive-industry heavy hitters at the Challenge Design. Maybe one of them has an overcrowded garage.

Purpose: To move riders over
any terrain with unprecedented control