Dust off that old Xbox, add a little free software, and get your movies and songs into the living room where they belong 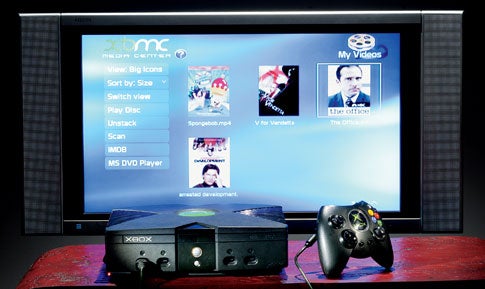 Although the sleek new Xbox 360 is all the rage with gaming geeks these days, that chunky old first-gen Xbox has something the 360 doesn´t: a legacy of hacks that give it a life beyond gaming, including the ability to take that episode of The Office you just downloaded and stream it to the flat-screen in front of your sofa.

Fortunately, unleashing your Xbox´s hidden talents no longer requires soldering skills or Linux savvy. Since we first wrote about modding the console, in May 2004 [â€Let Your Xbox Looseâ€], hackers have devised programs known as softmod installers that make unlocking the box a simple â€click Nextâ€ process anyone can follow. Once complete, you can copy dozens of applications, including Xbox Media
Center (XBMC), from your computer.

The free XBMC gives you what´s called a 10-foot interface, which you can navigate from your couch with a standard Xbox controller. In addition to playing audio and video files (including your iTunes library) from the Xbox´s hard drive or any computer in your home, XBMC can display digital photos, weather forecasts, even RSS feeds. It supports more movie and music formats than Microsoft´s Media Center
Edition OS, and you can customize its appearance. There are several XBMC tutorials online, but the easiest one I found is
at productwiki.com.

Overview:
(For Detailed Instructions, see the next page)

My second month here at PopSci, we hacked our in-house Xbox with a mod chip to unlock the Linux computer inside. I passed the actual operation off to a colleague more skilled with a soldering iron than I, and even he killed the box in the process. So it was with no little trepidation that I decided to take a crack at modding another Xbox to install Xbox Media Center. Fortunately, the so-called softmod, or solderless, process is far easier. And I had the excellent guide written by H2.0 pal Erik Kalviainen of Product Wiki to help me along. That said, I hit a few snafus and picked up a few nuggets along the way.

Sometimes You Have to Lie

The trickiest part of this project-the one I didn´t think I´d be able to pull off in time-was finding old copies of either Mech Assault, Splinter Cell or 007: Agent Under Fire. Only versions of those games with specific serial numbers will allow you to perform the hack (the games allow you to take advantage of a hole in the Xbox´s security, but subsequent versions were quickly updated when Microsoft realized what was happening).

I visited four used game stores in New York City and in each I found a game box with the correct serial number. But when I went to the counter to get the game (they display empty boxes and keep the actual discs in a drawer), the employees paid no attention to the serial number and just dumped the first disc they grabbed into my bag. Naively, I pointed this out to the Comic Book Guy look-alike at the first store, only to be told, â€It doesn´t matter, it´s the same game.â€

â€Actually, I´m doing the Xbox hack so I need the specific version,â€ I replied, hoping to make some sort of I´m-a-nerd/you´re-a-nerd connection. No sooner had I explained my mission than the clerk shot his colleague a smug grin and then informed me, â€Well, since you told us that, now we can´t sell it to you anyway.â€ Dumbfounded, I asked why, and he said because they could get sued. You bet pal-I´m sure Gates´ lawyers have your store bugged. I remain convinced they were just being jerks to an obvious outsider.

So after spending $10 on worthless versions of all three games (anyone want ´em? Write me at h20@time4.com. I tried another tack at the next store. After walking out, checking the disc, and realizing I´d bought another unusable copy, I returned to the store and asked the clerk if he had the version of the disc that matched the box. â€It´s for my little cousin,â€ I lied. â€He asked for this one specifically-I have no idea why.â€ If the clerk knew my scam he never let on, but he didn´t have the right version anyway. A third store, same routine, same outcome. Finally, thinking perhaps karma was punishing me for my lies, at the fourth store I simply bought every copy they had, and one turned out to be the right version. So, forget what I said in the section header-don´t lie. And don´t appeal to smug store clerks´ nerdiness. They are apparently oblivious.

Unlike hacks to the PSP or iPod, which require that you not run the most recent firmware, the softmod Krayzie NDURE exploit requires an updated Xbox. I learned this the hard way after sailing to step 6.2 (Start the Exploit) in ProductWiki´s tutorial. When I chose the Install Softmod option, I repeatedly got an error saying it couldn´t be done. After extensive frustrated Googling, I sussed out the problem: My Xbox had old software on it. Fortunately, updating is a breeze. Just pop in any game with Xbox Live, and it will automatically update your box. With that done, I re-ran the exploit and it installed easily.

Skinning Ain’t Easy
One of the cool features of XBMC is that you can install different skins to change the look of the interface. I found dozens to choose from here. To install, you simply copy the entire skin folder into the Skin folder on your Xbox using FlashXP. The problem: nearly all of the skins I downloaded wouldn´t work with the latest version of XBMC. They were simply grayed out in the â€Skinsâ€ menu. As best I could tell, the most recently updated skins work best, but it was a real hit-or-miss exercise.

**Despite the foibles above, the hack went pretty smoothly-until I got to actually watching or listening to stuff. You can use the FlashXP program to just copy files onto the Xbox´s hard drive, but it´s slow and wonky, and doing so every time you get a new album or movie would be a pain the butt. Streaming video and music from your computer to the Xbox over your home network is a much simpler solution, if you can get it to work. Per a suggestion in some forum post, I used a free program called ccXgui LITE . It´s a program you run on your PC (not Mac) that allows XBMC to see content in certain folders. Following the included instructions, I got it working pretty quickly, and streaming video files over my 802.11b network seemed to work fine. And I admit, it was a bit of a rush seeing the John Stewart on Crossfire clip (my default sample video) streaming live from my bedroom to the living room. But choosing the files in XBMC was cumbersome, and I never could figure out how to make it update automatically. If anyone has better luck or a better solution, e-mail me at [h20@time4.com](mailto: h20@time4.com).