The Fastest R&D Lab On the Planet

The tech behind the 200mph MotoGP superbikes is taking to the streets. Get a taste of the action with our heart-pounding, high-speed video lap around the Laguna Seca racetrack 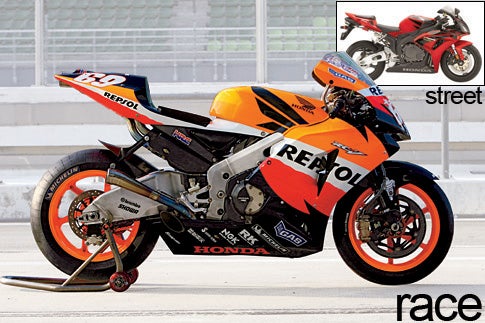 For a video lap around Laguna Seca, scroll to the bottom of the page (and turn up your volume).

A 747 takes off at 200 mph–the top speed of a Ferrari. MotoGPbikes break two bills with power to spare. MotoGP is the ultimate motorcycle racing series, a pure combination of advanced technology and athletes psychotic enough to pilot these overpowered machines at speeds most wouldn’t dare with four tires on the ground. Riders lean so severely into turns that they scrape their elbows and knees on the asphalt; brake so hard they have to force their weight over the back end of the bike to keep it from flipping; and accelerate so violently that their front wheels often leave the ground. The only reason the riders make it out alive is because they drive the most precisely engineered motorcycles ever made. Fortunately for the pro racer in all of us, that technology goes from pit lane to dealership nearly as fast as it gets around the track.

Take, for example, Honda’s RC211V-the bike Nicky Hayden rode to victory in the Red Bull U.S. Grand Prix last July. The most advanced machine on the MotoGP circuit, it weighs less than 330 pounds yet packs more than 240 horsepower (around 150 hp more than an average street bike). It rockets to 100 mph in less than five seconds and can hit 215 mph. Oh, and it costs about $3 million. But much of the engineering that makes it all possible found its way to the Honda showroom on a 2006 model that anyone can pick up for around $11,000.

The CBR1000RR was designed concurrently with its MotoGP sibling, and it also benefited from lessons learned on the track. “The street-bike R&D teams worked side by side with the racing-development team,” says Honda vice president Ray Blank. “Typically you see technology transfer several years down the road, but in this case they were developed almost simultaneously. It’s real-time technology transfer.”

The CBR, which came out not three months after the 2005 season ended, incorporates virtually the same fuel injection, rear suspension and body-panel design as the RC211V, among other mutations of the track monster’s mojo. The CBR isn’t nearly as powerful-and it’s street-legal (spitting flames out your tailpipe is frowned upon in California)-but put it next to Hayden’s, and it’s hard to tell them apart.

This is, of course, much to the delight of superbike enthusiasts, who can buy a stock ride that packs a huge percentage of the MotoGP thrill. It´s also far, far more performance than any rider actually needs. But when it comes to buying a race-bred street bike, who said anything about need?

You’ll need the QuickTime plug-in to view this video. Download it here for free if you don’t already have it
installed. For a version encoded for your video iPod, click here.