What does a propulsion engineer do when he wants to experience the power of a rocket without going to space? He simply bolts one to a bike 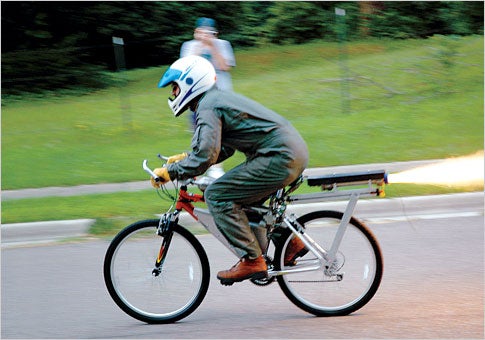 1. A toggle switch on the battery pack arms the ignition system.

2. The left-thumb button sends power from the battery pack to an igniter on a model-rocket motor inside the rocket engine, vaporizing the
roofing-tar fuel so it can burn.

3. The right-thumb button keeps the nitrous oxide flowing (and the rocket lit) as long as it’s pushed.

4. The left brake lever regulates the flow of nitrous and throttles the rocket.

For rocket designer Tim Pickens, a rocket on two wheels is the next best thing to a spaceship. “At heart we’re a bunch of guys wanting to go to space, and we can’t afford it,” says Pickens of himself and his rocket-scientist brethren, most of whom never get to ride their own creations. “Basically it’s my own subscale space program.”

Pickens, president of rocket-design firm Orion Propulsion, created his first rocket bike with fellow speed enthusiast Glenn May by bolting a 35-pound-thrust rocket engine to Pickens’s bike-enough power for a gentle push down the road. That
project didn’t kill anyone, so Pickens got himself another bike and stepped it up, attaching a 200-pound-thrust engine capable of blasting him from 0 to 60 miles an hour in five seconds-fast enough to beat a Porsche in a drag race.
In fact, the rocket bike employs the same hybrid rocket technology as the suborbital spaceplane SpaceShipOne, whose propulsion system Pickens helped design.

In place of synthetic rubber fuel, however, the bike uses ordinary roofing tar. To ignite it, Pickens placed a model-rocket motor inside the engine. A button on the handlebar fires the model-rocket motor, which in turn sets off Pickens’s larger motor by lighting the roofing-tar fuel. His next project is to build a company car: a pickup truck with a removable 2,000-pound-thrust rocket strapped into the bed.