NASA Is Growing Potatoes In Peru To Simulate Martian Conditions

If Mark Watney can do it... 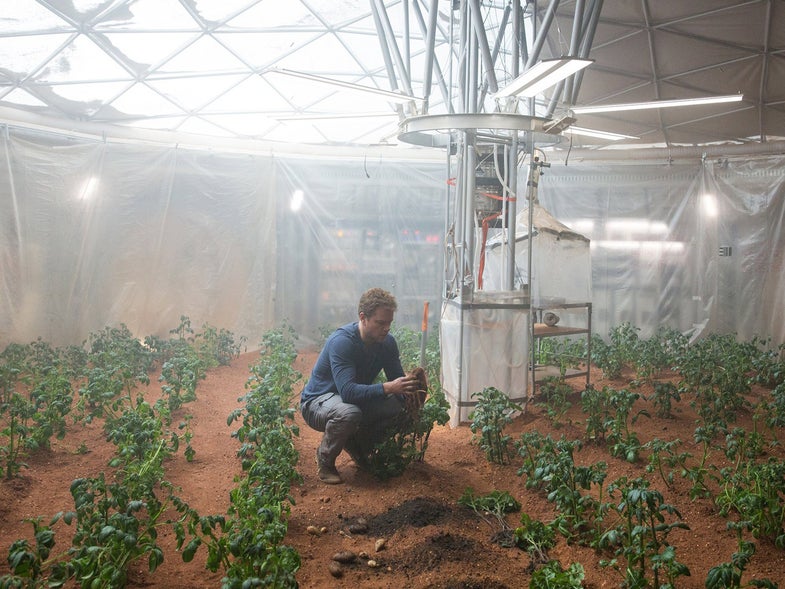 In order for humanity to one day colonize Mars, researchers must first find a sustainable crop to grow there. However, Mars isn’t the most hospitable place for plant life, which is why NASA scientists are currently in Lima, Peru attempting to grow potatoes in a simulated Martian environment.

The experiment, which began in January, is taking place at Lima’s International Potato Center (CIP), a nonprofit research center aimed at achieving food security, according to a press release put out by CIP in December. The researchers are growing 100 different varieties of potatoes and subjecting them to a slew of tests to see if any of them can hold up to Martian conditions.

So, why potatoes? As Scientific American points out, a single potato can contain 10 percent of an average person’s required daily caloric needs. They also thrive in harsh, dry environments. With that said, the team will need to test all 100 varieties of potato to see if they provide enough calories and can withstand the extremely dry, desolate landscape found on Mars. NASA plans to continue this experiment at least until March, and possibly longer, according to Scientific American.

For the experiment, researchers hauled 200 pounds of soil from La Joya Pampas, a region in the Atacama Desert known for its similarities to Martian soil, to CIP. Now, they are testing each potato to see if they are capable of growing in such harsh, dry conditions. If they aren’t, the team will attempt to infuse the soil with nutrients and also try using aeroponics, where plants are grown in a moist environment without soil.

Out of the 100 selected varieties, which were handpicked from CIP’s 4,500 recorded varieties, 40 are native to the Andes Mountains, the area of the world where potatoes were first cultivated 2,500 years ago. The rest are genetically modified to make them hardier to salt and immune to viruses.

If all goes well, NASA will find a suitable variety that grows well, yields a significant amount of potatoes per harvest, and also reproduces. It’s a tall order, but the researchers are confident in their chosen crops. “We’re almost 100 percent certain that many of the selected potatoes will pass the tests,” says Julio Valdivia Silva, a Peruvian NASA astrobiologist in a press release.

Perhaps potatoes might be one of our tickets off this rock.