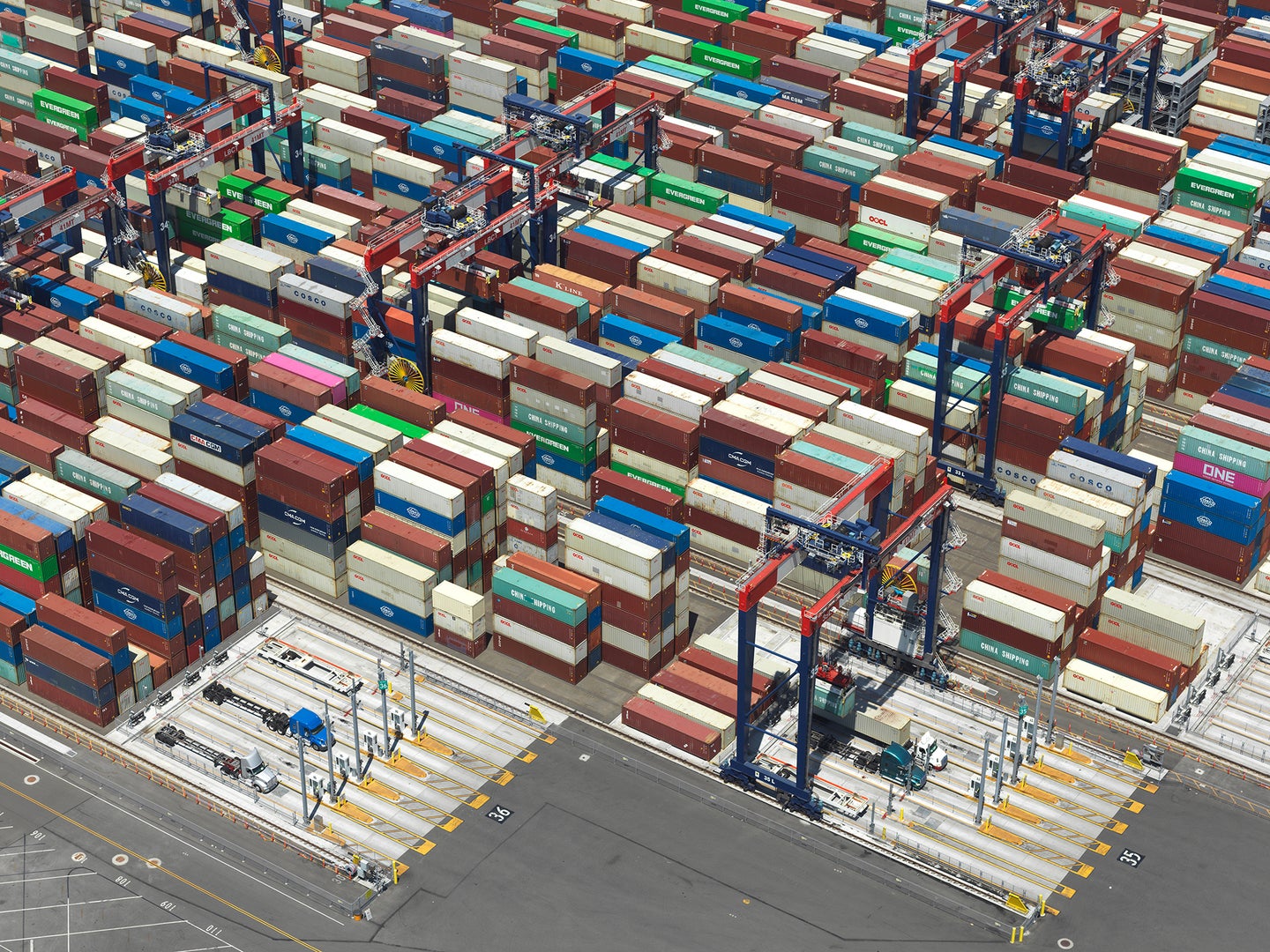 Essentials such as jet fuel, recycled steel, and avocados are funneled through the Port of LA, only 28 miles south of the Hollywood sign. Justin Fantl

Precise tracking data powers a complex dance of ships and trains at the Port of Los Angeles.

EACH DAY, some 59 million parcels land on doorsteps and porches and in package rooms across the US. To manage the rising number of e-commerce orders, which amount to almost $1 trillion a year, companies have spread their operations across sea, air, highway, and rail. Few places embody the attendant growing pains better than the Port of Los Angeles, a Pacific nexus of the global supply chain web—and the country’s busiest commercial seaport.

The 7,500-acre facility, which is roughly six times the size of the Navy’s largest shipyard and sits partially on an island in the San Pedro Bay, is almost incomprehensible in scale until you’re above it, says photographer Justin Fantl. Though the scene can feel frantic, his images focus on the “organized design” of the terminals, where goods are lugged to and from boats.

In 2021, the ship, train, and truck hub processed 10.7 million standard containers, a record in its 114-year history. But it also hit bottlenecks as workers struggled to find enough hands, equipment, and space to unload the crush of cargo. As vessels and vehicles lined up, transportation experts found smarter ways to time transfers and reduce congestion. Their systems helped clear the backlog and set up smoother shipments in the future.

↑ The port’s 43-mile-long waterline has two key features: the harbor and the breakwater. The latter, a barrier made of 6 billion pounds of rock, protects the terminals from floods and waves. It also keeps vessels waiting to berth far offshore, so the smog from their engines doesn’t hurt Angelenos’ lungs. This strategy was in full effect in November 2021, when docking delays forced 86 container ships to loiter in the region. Typically, the number rests at a dozen, says Kip Louttit, executive director of the Marine Exchange of Southern California, which works with the city and the Coast Guard to direct traffic to and from the hub.

↑ Of the 31 terminals at the port, seven are dedicated to removing containers with towering cranes. The others are for emergency services, leisure cruises, and other industrial purposes. “There’s only so much real estate,” Louttit explains. “That’s one of the challenges: The number of terminals has remained static, even as the size of the ships has doubled or tripled.” Twenty years ago, vessels would max out at 8,000 standard containers; now they can hold up to 20,000, totaling more than 1 billion pounds of bulk goods.

↑ The average boat trip from China’s manufacturing hub, Shanghai, to Los Angeles spans thousands of nautical miles and takes approximately 15 days. With a little math, planning for a cargo drop becomes anything but guesswork. Louttit’s group tracks vessels departing from East Asian ports and Arctic waypoints to slot them into berths according to their cruising speed. This has drastically shrunk the number of ships waiting in the harbor, down to six at its lowest point.

↑ Auto shipments from Japan and South Korea make up a big part of the port’s business. Each year it gets more than 100,000 shrink-wrapped Nissans, Infinitis, and Mazdas, which the workers drive straight off the boats and into a lot. The cars are mostly distributed to dealerships in Southern California, though recent semiconductor chip shortages and COVID outbreaks on factory lines have diminished stocks.

↑ Dockworkers use cranes up to 200 feet tall to stack containers eight to 10 stories high. Each unit (full or empty) is tracked meticulously through ship manifests and a cloud-based “control tower,” from the deck to the dock and finally the dispatch vehicle. This data helps operations run more efficiently—and feeds the shipping updates that are emailed to customers.

↑ The port has six rail yards and more than 65 miles of tracks that shuttle containers to distribution sites farther inside the city. The lines carry about 26 percent of the cargo that comes to berth, and they will get a boost with a five-track expansion that should be completed next year. Another bonus: The high-capacity trains cut down on exhaust-belching semi trips, especially as the city swaps its diesel locomotives for electric ones.

↑ The American freight train network dates back to the 1830s. The modern supply chain still uses some of those transcontinental lines, but it gets help from logistics management software to choose the most efficient routes and times. In LA, they use a program called a port optimizer to line up transfers between boats, trains, and trucks as tightly as possible. Similar to traffic control in the harbor, this keeps freight cars from waiting at the yards.

↑ In late 2021, President Joe Biden struck a deal with the Port of LA to have it expand to a 24-hour daily unloading schedule. By then, the terminals were already less squeezed—and the bottleneck has further improved in recent months. But getting 18-wheelers loaded up in this bay is only a piece of the puzzle, Louttit from the Marine Exchange says: A shipment can hit snags in other parts of its journey. For example, if a restocking truck pulls up to a Walmart after it closes, what’s the point of working around the clock?

↑ Los Angeles traffic can be a nightmare for commuters and truckers alike. The single suspension bridge between mainland San Pedro and the island holding the terminals is often a pinch point. City officials hope a newly opened byway connecting to the nearby Port of Long Beach will provide relief, but they’re also remapping some highway routes to divert deliveries away from the rush-hour stream. If that doesn’t work, they may have to build a second passage over the inlet.

↑ After facing his own shipping delays during the pandemic (he was couchless for six months), photographer Fantl realized how much work it takes to mange the port’s operations—and keep every step of the supply chain in sync. “People don’t appreciate these bigger systems that allow us to live comfortably,” he says. “The fact that we can get a delivery in a day or two is unreal. I’ve come away with a little patience.”